Plastics are used everywhere, from protecting food and pharmaceuticals from contamination and degradation to making sure the latest consumer products make it to you in pristine condition. The ability to easily and quickly shape plastics into virtually any form, size, and shape, coupled with its ability to be translucent, colored, or printed on, has led to the manufacturing and packaging industries gratefully adopting plastics as a ubiquitous and flexible manufacturing technology.

But inspecting plastic parts isn’t always so easy. The most common types of plastic inspection — short shots and flashing — don’t pose a great challenge to a machine vision system for most simple shapes because machine vision excels at comparing one shape against another. If a plastic part has a short shot, then it isn’t complete, and backlighting will quickly reveal the missing material compared to a golden (ideal) part. When there is too much plastic, flashing or extra plastic at the seams, it is likewise easy to identify.

Other applications, however, need a little more help. Searching for fine cracks or other hidden defects indicative of internal stresses that can lead to structural failures — such as the inability of plastic caps to keep carbonated beverages in their bottles or flaws in blister-packed pills — requires special lighting and image-acquisition techniques.

“Picture a ring light around the camera,” Kurzynski says. “First we take an image with the top quarter of the light illuminated, then another with the right quarter, a third with the left quarter of the ring light, and one more with the bottom quarter of the light. Each picture creates different shadows in the image. Using our algorithms, we create shape and texture images of the surface based on those shadows that reduce the effect of halos from hot spots or bright reflection off of plastic and other highly reflective surfaces.”

LumiTrax can also take a fifth picture with the light off, using ambient light only, and subtract that light from the combined photo to eliminate the negative influence of uncontrolled ambient light. “Because the camera is designed to transfer data from the sensor in only 1.7 milliseconds (ms), we also reduce or eliminate the effect of vibration on the image caused by nearby automation equipment,” Kurzynski says. “The high speed also means the customer doesn’t have to give up throughput.” (See figure 1.) 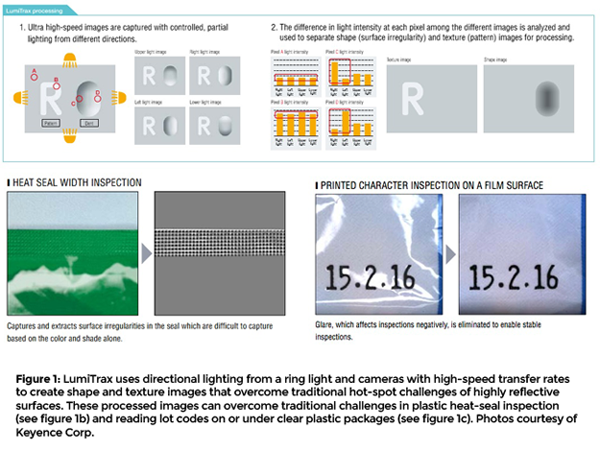 The TL305 uses three linear lights in a ‘tent’ structure, says Matt Pinter, director of engineering and cofounder of Smart Vision Lights. The camera, typically a linear array camera, is mounted above the light enclosure, looking down through its center line with a field of view across the inspection area — likely a moving conveyor belt below. A primary line of LED lights shines on a beam splitter that directs the light directly onto the conveyor surface along the same vertical axis as the camera (see figure 2). Secondary linear LED lights are located along each edge, pointing upwards to curved surfaces inside the enclosure that act as diffusers. Each light can be independently controlled so that the system design can tune the light to specific materials for the application. 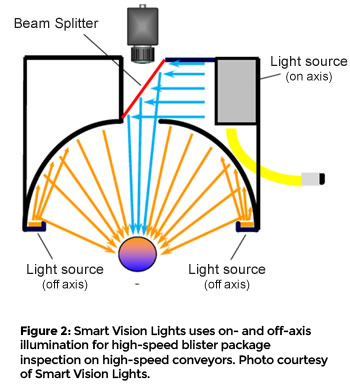 JAI Inc. (Yokohama, Japan, and San Jose, California) recently became the first major machine vision camera maker to develop a four-sensor linear camera that captures near infrared (NIR) as well as red, green, and blue light. In addition to the SWEEP+ series of combined visible and NIR line-scan cameras, JAI’s FUSION cameras have been widely used in plastic inspection applications. Inside the camera, a prism splits the light into visible and NIR light. Each light channel is directed at one of two CCD sensors optimized for that spectral band. The images are output separately, revealing hidden flaws in plastic injection molded parts, as well as a visible channel for inspecting labels and other marks on the outside of the parts.

As figure 3 shows, the NIR channel easily sees through the organic printed inks on the top of the bottle cap and the sugar package. While the visible channel confirms the accuracy of the printed label and patterns, the NIR channel reveals a stress crack in one bottle cap that would not be detectable using visible light alone, as well as a cold flow curve in the second cap. Both flaws could potentially compromise the bottle seal during transport, leading to a mess as the caps gave way to internal pressures. In the case of the plastic sugar package, the manufacturer takes one final look at the sugar inside to check for contaminants that may have entered the production stream just before packaging. 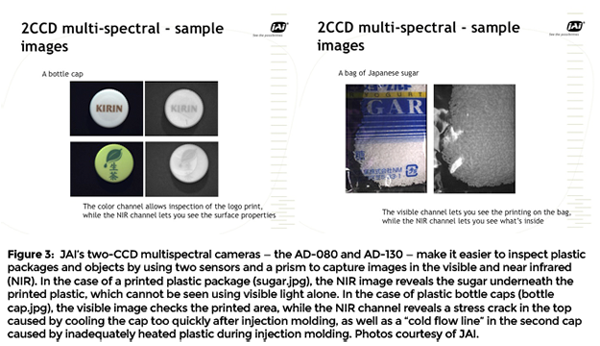 Plastic packages and bottles have transformed our lives, allowing us to cost effectively store and transport food and beverages in a safe manner. However, they also challenge quality assurance systems due to highly reflective surfaces and hidden flaws caused by phase changes during injection molding processes. By using special lighting techniques, machine vision designers can overcome these challenges and help manufacturers maintain the safety and quality of their products as well as the package’s visual appeal.