Lean manufacturing, a system of production, is ripe for robotics. This system emphasizes the efficient use of resources that shortens lead times and decreases costs by eliminating all non-value waste. Robotics are particularly suited for lean manufacturing since a successfully integrated manufacturing work cell has many of its concepts designed in from the planning stage. Saving time and materials, as well as simplicity, are key ingredients in lean manufacturing. These qualities, plus agility and flexibility, are all intrinsic to robotics.

How do system integrators implement a lean manufacturing robotic work cell? Keith Lemke, Sales Engineer at Applied Manufacturing Technologies, Inc. (AMT), Orion, Michigan, says the salient aspects are taking a holistic approach to production and to zero-in on only those operations that go towards efficient manufacturing.

Time is of the Essence

‘‘Lean manufacturing looks at an entire process and focuses on removing all non-value added steps,’‘ Lemke said. Lemke cited an example of a non-lean process where parts are handled in batches. ‘‘Look at the individual steps of a three part process. One step takes 30 seconds to complete, another takes 45 seconds and a third takes 90 seconds,’‘ Lemke said. A non-lean process manages each step independently and stores the pieces from the first two steps until they are needed for the 90-second step.

Lemke went on to show how a lean manufacturing robotic work cell would function.

‘‘In lean manufacturing, design the procedure to have the 30-second, the 45-second, and 90-second cycle times in one production cell. Through the use of parallel lines, you would target the entire system to have the same cycle time, in which everything would flow from one station to the next,’‘ Lemke explained. ‘‘It is vital that there is no double-handling of parts and that everything is spaced out correctly.’‘ To accomplish this, Lemke often inserts a second robot into the work cell or creates a parallel process to equalize the cycle times of each step.

‘‘I look at the process backwards,’‘ asserts Lemke. ‘‘Lean manufacturing looks at the entire process and breaks it down into steps. You process the part, making sure you have the right equipment at the right spot at the right time,’‘ Lemke continued. ‘‘I use engineering knowledge and robot simulation tools to prevent one robot from being starved of parts while another robot can barely complete its tasks.’‘ 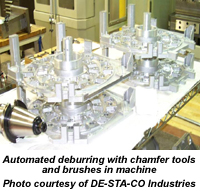 The value of saving time through lean manufacturing techniques was also on the mind of Dan Peretz of DE-STA-CO Industries. Peretz said ‘‘Lean manufacturing means that robot operators have everything needed at their fingertips for all the processes that have to be done in that work cell.’‘ Peretz is the National Sales Director of DE-STA-CO Industries, the Madison Heights, Michigan headquartered designer and manufacturer of clamping, gripping, transferring and robotic tooling solutions.

Peretz illustrated the merit of saving time through a lean approach to robotic-grounded manufacturing. The example he gives is that of a robotic drill operator. 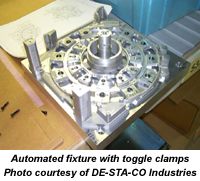 ‘‘In the process of running 1,000 pieces, the operator might have to go somewhere in the shop to find a tap drill. By putting in the tap drill, the operator has to adjust the cable down a little so the part’s location is shifted. The part then has to be realigned,’‘ Peretz said. ‘‘All of this takes time. If an operator has to walk to get a tool or part, that is a waste of time because it has no value-added to the component itself,’‘ Peretz cautioned.

‘‘In designing a work cell that handles five different parts, everything the operator needs to run all five parts should be right there,’‘ contends Peretz. He claims that only one half of one percent of time in manufacturing is value-added processing. ‘‘The rest of the time is non-value added time, such as set-up time and moving product from here to there.’‘ Peretz strongly believes that this wasted time could be eliminated using robotic lean manufacturing principles. 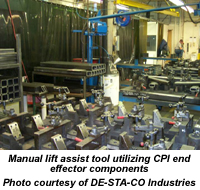 Simple but Effectively Efficient
Peretz suggests that simple things lend itself to lean manufacturing aside from having all the tools needed for a process be at hand for the operator. Color-coding tools and parts is also a means by which time efficiencies could be achieved.

‘‘Traditionally, the way of thinking was the more you make of something, the more costs could be driven down. That is true to a point but producing in large quantities also limits a manufacturer’s flexibility,’‘ Peretz said. In short, there are often diminishing returns and storage costs when producing in such quantities, which robotic lean manufacturing is notably suited to avoid. 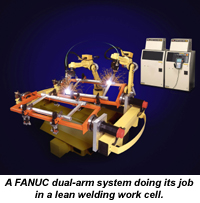 ‘‘Lean manufacturing work cells must be adaptable to a mix of products,’‘ Sharpe said. Sharpe went on to say ‘‘With lean manufacturing, you have to look at the benefit and where the impact is.’‘ These areas of impact include off-line fixturing with the ability to properly present the part to the robot. Sharpe points out that a non-lean approach to robotic manufacturing might have multiple dedicated tooling. This leads to downtime if a tool change is necessary. Flexible fixturing, assisted by off-line programming through a PC, could help decrease downtime. The goal is to maximize efficiency of time and materials. Lean manufacturing in a robotic setting makes this possible. 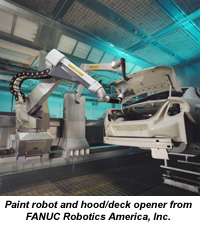 Two Shall Become One
What if material joining is thrown into the mix of robotic lean manufacturing? FANUC Robotics America’s Michael Sharpe addresses this.

‘‘Any product where you have to join parts together, is going to make production more difficult. These processes include arc-welding, spot welding, bonding, gluing, or riveting.’‘ Sharpe said that the process of material joining has much to do with different geometries the robot has to follow.

‘‘Joining is one of the most difficult to develop into a lean manufacturing system. Inherently, when you put parts together, an integrator has to figure out some way to hold them,’‘ Sharpe said. ‘‘System engineers have to think about joining multiple components that form an assembly.’‘ This adds complexity to the process.

Likewise, Lemke of AMT holds that the process of robotic material joining brings its own challenges.

‘‘Joining dissimilar materials are difficult. Take for example the insertion of a metal part into plastic,’‘ Lemke said. ‘‘You need to inject the plastic around the metal rather than inserting the metal into the plastic because the plastic will melt.’‘ This is often a tricky process.

‘‘The process of creating a weld that is sufficiently strong requires correct currents/voltages, wire feed rates, torch size/shape, and robot motion,’‘ states Lemke. ‘‘If cycle times are too slow for one robot to complete the entire process, you may need another robot welding on that part. This lean arc-welding process prevents bottlenecks upstream,’‘ Lemke said.

Dan Peretz has a different take on the role of lean manufacturing in a robotic material joining work cell.

‘‘There are various types of joining, each of which have their own processes in order to get them accomplished.’‘ Peretz pointed out that when riveting, a wise integrator sets up the ability to drill also.

‘‘A non-lean approach will have each piece drilled successively then the riveting. Lean manufacturing means drill then rivet each piece,’‘ Peretz said.

The same hold true for welding where two pieces need to be bent and folded so they connect properly. Peretz believes it is best to bend/fold, clamp, then weld. ‘‘Lean is not bend, bend, bend then weld, weld, weld. Lean is bend then weld, bend then weld, etc.’‘ Peretz said the latter technique is less disruptive to the flow of production, and is less likely to weld a poorly bent part.

‘‘Lean manufacturing minimizes the opportunity to create waste such as defective parts or the wasted time in trying to rework them,’‘ Peretz concluded.

Is there a distinction between lean manufacturing and robotic-based production? If there is, the line is certainly blurry at best.

‘‘In robotic-based production there is not a difference between a lean manufacturing work cell and one that is not,’‘ says Brian Turner. Turner is Vice President and General Manager at Automated Concepts, Inc., (ACI), an engineering services and systems integrator headquartered in Council Bluffs, Iowa. ‘‘Most robotic work cells were designed with lean manufacturing in the background, whether the integrator realized it or not.’‘