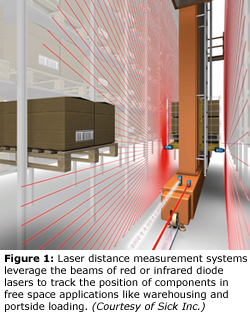 The most essential aspect of motion control is the closed loop feedback that guarantees positional accuracy. Achieving the desired performance means choosing a sensor that not only provides the desired resolution and repeatability but that can deliver that information within the constraints of the application. The most common feedback devices for motion systems include optical encoders, magnetic encoders, and resolvers. For materials handling applications that involve long distances or coordinated motion of disconnected objects like unmanned carts, however, laser sensors may provide a more efficient or cost-effective option.

Rotary encoders consist of an optically or magnetically patterned disc attached to a shaft (typically of a motor or actuator), plus a sensor head for readout. Another variation involves an encoder disc attached to the shaft of a wheel that runs along a physical track as the load moves. In all cases, as the shaft turns, it moves the encoded disc and the sensor head converts that to motion. Depending on the type of device, that motion gets translated into a relative displacement or absolute position.

Linear encoders operate analogously to rotary encoders, except that the disc is basically unwrapped and turned into a linear strip attached to a track. The sensor head rides along the track, typically only millimeters away. For short distances, this can be effective but for displacements of tens of meters, or across open space, is not practical, either physically or economically. In these cases, laser distance sensors provide alternatives.

Laser distance sensors can be roughly divided into two types: time of flight (TOF) and phase-correlating designs. Simple and robust, TOF systems send out a beam to the object being tracked and monitor the return signal, using the round-trip time to calculate distance. Phase-correlating systems require additional optical elements to split the laser output into test and reference beams. The test beam reflects from what is being monitored and returns to interfere with the reference beam. In general, phase-correlating designs are easier to implement and more economical. They provide faster response time and results. Because TOF systems need to perform a calculation to generate output, they require high-speed - and more expensive - electronics.

The most common applications areas for laser distance sensors are materials handling environments such as warehouses or ports, which feature cranes, gantries, and unmanned guided vehicles. Typically the object being tracked features a reflective surface of some sort to return the beam. The most common element used is a retro reflector, an optical element that redirects any beam that shines into it by 180°. Retro reflectors can be implemented as single optical elements or as sheets of material.

In the simplest case, a laser sensor can be used to determine whether a gantry is a motion, for example, and how far it is from another gantry. The system simply sends a laser beam or laser pulse out to the structure it is tracking, monitors return, and processes that data to provide feedback to a control loop, so that the system knows whether to run or stop. Specifics of the implementation can vary - the laser sensor might be on a moving crane and monitoring a stationary wall fitted with a retro-reflecting surface or element. Alternatively, the laser may remain static, for example on a crane monitoring a container handling fixture (spreader) in a port environment. Spreaders need to be tracked as they near the container, for proper gripping, and once they are attached to the container so that it can be set down without skewing or causing damage. By adding retro reflectors to the spreaders, crane manufacturers can track their motion using laser sensors. The lasers can also get a return signal from a standard container that is not fitted with optical components, although signal strength suffers somewhat.

Choice of wavelength
Laser distance sensors typically incorporate diode lasers, which are compact, robust, and economical. The devices are electrically powered and can be integrated at the board level. Because laser sensors leverage optical technology, they can be vulnerable to environmental conditions. Fog, dust, and humidity can attenuate the signal, reducing propagation distance, while snow or salt haze can obscure the optics.

Most common devices operate at either red or infrared wavelengths. All things being equal, the longer the wavelength, the more robust the beam. Infrared light diffracts less than red light when it encounters molecules of water in the air, for example. Dan Bruski, Senior Product Manager at SICK Inc. (Minneapolis, Minnesota) points to an IR laser distance sensor that offers a range of 1.2 km when used with an infrared source. "We can’t get that on a red light version," he says. “We can only go half that far with red light.”

The extended range of IR provides benefits, even if the application actually operates at shorter distances. "1.2 km is the specification, but that also means if you're going 10 m or 100 m, you have a lot of excess gain," he says. "That allows you to use the system successfully in dusty, dirty conditions. Is the reflector going to get coated with something? As long as the light comes back, it's okay. You've got a lot of headroom.”

Traditionally, optical systems do not tolerate shock and vibration well. Laser sensor systems have been designed as robust industrial sensors, however. "I have not run into any shock in motion control cranes that lasers can’t handle except maybe if the sensor is on the spreader and the spreader gets dropped," Bruski says. "Otherwise, gantry cranes, indoor or outdoor railcars, that kind of stuff is no problem. Any industrial sensors that these users are looking at that are designed for these kinds of applications should be fine."

The characteristics of the application determine the type of sensor to use. TOF sensors recover quickly after signal loss, for example, while phase correlated versions do not. For some applications, the optical beam will typically remain unbroken in the normal course of events. In others, like a warehouse application with forklifts moving back and forth, interrupts may be a part of daily business. In such a case, a TOF sensor might be the best choice. If it experiences an interrupt, it recalculates position as soon as the detector requires the signal; the system is ready to resume operations within milliseconds. Phase-correlated sensors require a bit more time to reinitialize and would be a better fit for an application that requires high-speed results but remains interrupt free.

With the proper sensor, the system can be tuned to tolerate brief interrupts, so long as load velocity remains low enough to avoid endangering people or objects. The system can monitor the elapsed time and invoke an e-stop when it goes outside a safety margin.

Laser or Encoder?
In general, encoders provide higher resolution performance and work best in tightly confined, tightly synchronized applications, such as in packaging lines. Linear encoders can work just fine over distances, as well, but the cost begins to rise when the run of travel rises above several meters. At this point, the laser solution may provide the benefits.

One of the advantages to laser distance measurement is that the technology provides highly accurate feedback. A typical encoder set up for a rail car, crane, etc. might involve a wheel on a rail, hooked up to an encoder. The problem is that if the wheel slips or turns as a result of shock and vibration or wear, suddenly it is displaced with respect to the motion of the load. To compensate for possible error, systems can include a secondary sensor at the end of travel to reduce velocity for final positioning. The load creeps into place until it triggers the sensor. At that point, the system registers the physical position and can even use the data to re-home itself and eliminate error. The process works, but adds time to positioning and maintenance. “It slows you down," says Bruski. “If you take the laser sensor and shoot it at hardware that's moving, you know exactly where that hardware is at all times. You can ramp up and ramp down much faster in real time. You can also get very efficient—some people who have moved from encoders to lasers have seen 40% decreases in energy usage of the crane.”

From a cost perspective, a simple laser time of flight sensor doesn't present an extreme price jump over that of an encoder. A phase-correlated system might be closer to a few thousand dollars then the few hundred that an encoder might cost. That said, if the application involves long ranges, the cost difference between a linear encoder and a laser sensor begins to equalize once distances reach tens of meters. "The read head doesn't cost that much on an encoder but if you're going to start going to 10 m or 300 m, then the laser is much less expensive because you don't have to pay for the air in between you and the target," says Bruski. At that point, the benefits come into play, supporting the return-on-investment (ROI) argument. “I can position faster, I don't have to re-home, I can do more runs,” says Bruski. “I can actually move more things in the same period of time.”

As usual in motion control, the application drives the choice of sensor. For long-distance, open space applications, a laser distance measurement system may provide the most timely, accurate, economical choice.