Justifying Your Investment in Robotics 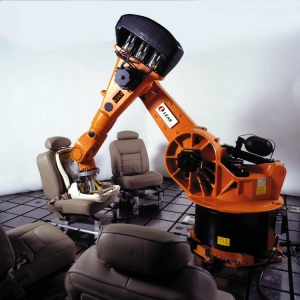 There are several benchmarks that can be calculated in making a justification for installing robots in your applications; here are just a few of the most compelling:

Any or all of these factors can yield themselves to a formula for calculating savings, according to Tom Bartoshesky, account manager for KUKA Robotics (Sterling Heights, MI). In many cases, the actual applications simply cannot be performed without robotic or hard automation. 'Take, for example, the manufacture of small disk drives, like the manufacturing of 5-1/4-in. or 3-1/2-in. floppy disks,' explains Bartoshesky. 'Human involvement in loading and unloading disk drives on a 24-hour basis would be nearly impossible, at least without incurring injuries through repetitive motion. Every injury incidence has a specific cost associated with it, but, depending on the severity of the injury, the cost could easily be higher than $100,000 in lost time and rehab.'

Being late to market with a new product can have a devastating impact on the bottom line, according to John Dulchinos, vice president of North American sales for Adept Technology Inc. (San Jose, CA). 'According to one calculation, a manufacturer stands to lose 33% of its gross profit potential over the product life cycle if it is late to market by even six months,' he explains. 'Improving its time to market can improve profits by at least 12%. This is often crucial in industries like electronics, where there is obviously a significant need to get to market first with products. Conversely, IBM states that, if they can beat a competitor to market with a new disk drive by just three months, it adds $100 million to their bottom line profits.'

Let's not forget the image factor, says Bartoshesky. Prospective customers are always impressed with robotic automation on a plant tour; such a walk-through can easily yield positive results in winning contracts.

A key part of DACO's vision to grow the company was winning 100% of Caterpillar's diesel engine flywheel business. 'We want to take this product from design to manufacturing to service volume-a cradle to grave approach,' says Bruce Lindgren, vice president. 'We were trying to offer a complete, integrated package and become more than a machine shop.'

By 1986, DACO was regularly machining Caterpillar's flywheels for a variety of engine applications, such as for on-highway trucks, generators, and boats. These parts, made from gray and ductile cast iron, weigh anywhere from 60 to 300 lbs. Diameters range from 16 in to 24 in. Because operators had to load vertical lathes manually with the aid of a hoist, production was slower than optimum. 'Operators were also heavily involved to control the machining process,' says Lindgren. 'Yet, finding skilled people in our area was getting more difficult.'

As DACO won an increasing amount of flywheel business, it created a vision for the future and a separate division dedicated to engine products. DACO also realized that throwing more machine tools and employees at that product line might not be an effective strategy.

Lindgren came up with a budget for new equipment, including FANUC SI 420 robots for loading and unloading, which would produce many more parts per hour than the company could ever produce in any other way.

DACO now has six Okuma LU-45 lathes and six MX-50HB horizontal machining centers in cells tended by six robots for machine tending. 'I estimated the number of pieces that each cell would make per hour, and, if I was able to make x number of pieces per hour with my hourly rates and costs, I would be making money on these cells,' explains Lindgren. 'I included hourly charges for fixed equipment costs, which were high, but had low labor costs, because there was very little labor involved. The justification worked very well as long as we were able to continue making a certain volume of parts.'

Lindgren points out that the volume of flywheels guaranteed by the job contract was a benchmark in making the decision to include robotic automation. 'If I processed my parts conventionally, I would have had lower fixed costs but I would have had higher labor costs, which would have meant that I would have needed more people than were available.'

The cellular flywheel production at DACO has yielded impressive results, including:

In some cases, the technology drift and focus alone will dictate the use of robotics. Such is the case with Lear Corp. (Southfield, MI), an automotive seating supplier. 'As a seating supplier, and from the technology standpoint, we were looking for a solution to replicate human motion that would be a test simulating a person moving in and out of the vehicle,' explains Bob Stewart, product life simulation supervisor, Lear Corp. 'We needed a testing mechanism that would be predictive in nature and would reproduce the wear and tear in the seat fabrics and in the seat itself. In order to develop a test that would be predictive in nature and would portray entry and exit, we obviously needed a multi-axis system. That's when we looked at robots.'

Stewart and his team found that a robot itself would not be any use unless it had the right tool on the end. Lear developed a fiberglass form that is molded to reproduce the contours of the human anatomy, both the buttocks and back. This form was then attached at the end of a six-axis load cell. The tool center point serves as the hit point of the occupant, which is a design point in the seating system. The robot motion in and out simulates a human occupant's ingress and egress to test for cushion fatigue of the seating system. The robot motion is useful in performing two basic tests-a bouncing type of test and a seat/back fatigue test, which is a structural test of the seat back.

The company deploys five KUKA and two Nachi Robotics robots in all. In a test development mode with KUKA, Lear Corp. has also developed feedback technology to ensure that the tests maintain the forces that are programmed into it. 'As the test progresses, we've created a program that will automatically adjust itself in order to always deliver the loads we're looking for,' explains Stewart. 'Without the robot having the force sensing in feedback technology, we would not be able to do the test at all.'

Stewart also found that, when compared to a more 'purpose-built' specific system made up of other components, the robotic test system was about half the cost of a specific machine for these tests.

There are, of course, automated tools that include sophisticated algorithms for ramping up faster for automated robotic assembly. One such program comes from Adept Technology Inc. Its Production Pilot simulation technology does more than just modeling a robot cell prior to pilot production. A model called yield in the program allows customers who are designing a product to design that product for automation.

'The program allows manufacturers to optimize product design for automation, so that when they get that product into production, the ramp-up is much more aggressive because the emphasis has been on the product design rather than going through a lot of de-bug time,' explains Dulchinos. 'The program includes a license for algorithms developed by Sony, which essentially compiles 15 years' of studies on what makes a product go together better and what makes it a more efficient design.'

Dulchinos reports much progress and success with assembly in electronics, in which robots are often used for circuit board and phone component assembly. In these situations, robots are also used in interfacing with test equipment and in loading and unloading components.

James F. Manji is a free-lance writer in Brunswick, Ohio.