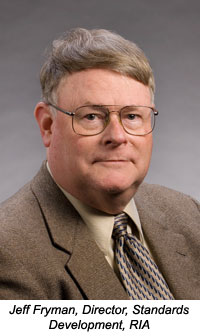 I have just returned from Frankfurt, Germany, and a very successful meeting where the ISO TC184/SC 2 WG3 team completed their work on reviewing the technical content of the proposed new Part 2 of ISO 10218, the International Standard for robot safety.  Where Part 1 only covers the requirements for the robot; Part 2 covers the integration and installation of a robot system or cell thereby giving a more complete set of requirements for robot safety.

ISO 10218-2 now enters the final phase to becoming a standard, the FDIS or Final Draft International Standard.  At this stage it is translated into French (one of the other official languages of ISO); then will be sent out for “parallel inquiry”.  This means the simultaneous balloting of the 19 participating ISO member countries and the combined European Union (EU) states for acceptance as a “harmonized” standard.

Do not look for these changes in the very near future, however.  The process takes time.  The ISO standard will be reviewed in February, 2010 for any editorial changes necessary as a result of the ballot vote.  Once that is complete then ISO has to review it and publish the standard.  That means it could be another four to six months before the ISO standard is actually published.  Work on the R15.06 will easily go into 2011, but hopefully not much beyond then.

And that is not all the news from the ISO front.  The ISO 10218-1:2006 (ANSI/RIA/ISO 10218-1-2007) is already up for review, and that update is progressing well.  The proposed changes will be issued shortly as a DIS – Draft International Standard – for the technical review of the revised and updated content.  It seems so short a period since we introduced that standard, but the update is coming at a very fortuitous time.  We will be able to include some new information from our “lessons learned” in writing the Part 2 that affect the Part 1.  That means the “what we wish we had said” discussions can be included to correct the requirements to better say what we meant to say the first time.

This is a very exciting time to be working in robot safety standards; and we will be sharing our experiences and a whole bunch of information at the upcoming 21st Annual National Robot Safety Conference in October (26-28).  With this year’s theme of Moving Forward with Safety, we’ll focus on developments in robot and machine safety standards, technology and products.  Be sure to join us in Dearborn (Detroit), Michigan to learn the very latest about the current state of robot and machine safety and what changes will be coming in the future.