Industrial Sensors and the IIoT 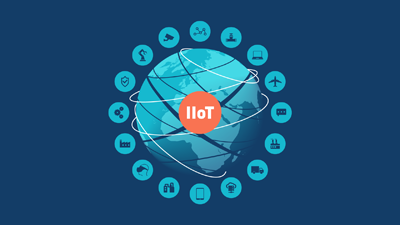 We live in the era of intelligence. Our phones, our cars, even our refrigerators are becoming smart. It makes sense that our factories are becoming smart also. Armed with detailed condition and performance data, the intelligent factory offers new tools to improve operations, support predictive maintenance, cut downtime, and increase overall productivity. Whether you call it the Industrial Internet of Things (IIoT), Industrie 4.0, or Cyber-Physical Systems, the concept of a connected factory that delivers easily consumable operational and business insights is poised to remake the industrial landscape.

At the heart of the visible factory lies a network of sensors that monitors characteristics like temperature, vibration, energy consumption, and more. These transducers convert physical phenomena into electrical signals that can be routed to the supervisory control and data acquisition (SCADA) system or enterprise network for analysis. Fully reaching the potential of the IIoT will require a lot of them—some analysts expect the market the to grow 24.5% annually to reach $34.75 billion by 2023.

Others, like Jérémie Bouchaud, MEMS team leader at IHS, are more cautious. “I don’t think there will be a massive deployment of sensors in industrial applications by a factor of 10 or so,” he says. “You are already monitoring a lot of what you need to monitor. I think the story is much more about using the sensors that are already there.”

“The IIoT is really all about data, says Nick Butler, senior group manager for embedded systems product marketing at National Instruments (Austin, Texas). “It’s data that promises to deliver the insights that will improve a company’s efficiency or yield or safety or uptime.”

Monitoring Machine Health
The cost of downtime can be frighteningly high. In the automotive industry, for example, is estimated at about $20,000 per minute. Sensing can provide essential information about machine health. Consider vibration monitoring. Every machine displays characteristic resonant frequencies in its vibration spectrum, which can be mapped using an accelerometer. Mechanical issues like stretched conveyor belts or worn bearings introduce new vibration frequencies. Accelerometers can create detailed vibration spectra. As part of a connected network and combined with automated data capture and analytics, they can alert maintenance to the emergence of new resonant frequencies that might indicate a problem.

Similarly, unusual heating detected by temperature sensors can warn of problems like lubrication breakdown in gearboxes or actuators.

A piezoelectric vibration sensor insists of a layer of piezoelectric material placed between a central column and a pair of test masses oriented orthogonally to one another. Vibration causes the masses to oscillate, compressing the piezoelectric ceramic to generate an electrical signal. The orientation of the axes enables the system to resolve forces into their constituent components.

Truly realizing the promise of the IIoT requires sensors that are compact, robust, easy to deploy, and also cheap. Piezoelectric sensors cost several hundred dollars each. As a result, they’re usually leveraged as test equipment moved around by maintenance from machine to machine. MEMS technology, if it can be made practical, would be a better fit.

Adding Innovation
A MEMS vibration sensor operates based on a combination of fixed and free-standing micro cantilevers. Vibration causes the distance between the fixed cantilevers and the freestanding ones to change. The readout technology is based on capacitive sensing— as the distance between the two sets of cantilevers changes, so does the capacitance. One of the key benefits of MEMS-based sensors is that they are compatible with semiconductor fabrication technology. Not only is the transducer patterned lithographically, the sensor as a whole can be produced as a system-on-chip device.

Given that the incumbent technologies are mature, manufacturers either need to develop new approaches or find substantially different ways of implementing pre-existing versions.

The sweet spot for MEMS sensors has traditionally been low-frequency applications like vehicle airbag sensors. To be useful for machine health, they need multiple types of improvements. “They will need to become smaller and cheaper and more distributed, and that is where the wireless aspect comes in,” says Butler. “Adding a radio presents its own set of challenges. Networking these devices together, synchronizing them, operating them in the high-EMI environments that are common in industrial deployments, and getting power to these devices all present their own challenges. Of course, all of these challenges spawn innovation.”

In order to fulfill some of the more gaudy predictions, sensor technology needs to drop significantly in price, according to Bouchaud. That’s a process that is already underway in the area of vibration sensors, a currently available vibration monitoring system consisting of two sensors and a transmitter costs around $6000 dollars. “It’s a real investment, and one you think twice about before you put it on the motor,” he says. Contrast that with a new motor sensor from ABB. “Once you go to €50 like ABB is claiming, that’s a real game changer,” he says.

Other than that example, the main trend Bouchaud currently sees is one of motion vendors adding connectivity to their standard sensor product line. That might be as modest as adding a connectivity chip to their standard devices. More advanced entries might include both chip and software stack. In both cases, the additions come at minimal cost to the customer. It is a process of preparing for future demand, and one that has been underway for five to eight years.

As to whether the predicted behemoth market will materialize, he has yet to discover a consensus among manufacturers. “Some people say that because of connectivity, their customers will want to know more and add sensors and places they didn’t have them before,” Bouchaud says. “Others are more conservative and believe it’s not true.”

Path to Success
The challenges go beyond just price. All of those wireless sensors currently operate on battery power. Depending on the numbers and the efficiency, that can potentially add up to a maintenance headache. It’s an issue that sensor manufacturers are already working on. “We did quite a bit of research with our customers and designed our wireless products to operate for three years on battery life,” Butler says. “We did quite a bit of research with our customers and we discovered that more than 90% of them are already doing annual maintenance rounds. They have no problem changing batteries once a year – it’s when you go to once a month or even once every six months that you hit the tipping point between the benefit of not running conduit in a hard-to-reach places and the problem of having to send a technician out to change the batteries every six months in a hard-to-reach place.” As a result, energy harvesting technology is a hotbed of research right now.

A key driver for adoption will be the development of simple technologies that are easy to integrate for OEMs whose expertise lies more in the area of mechanical, electrical, and controls design rather than embedded technology. Integrated solutions that are easy to put in place can spew doubtful part of the process. Thanks to the trend toward system-on-chip designs in the semiconductor industry, solutions are available today that eliminate the need for a deep skill set in embedded sensing. OEMs don’t need to learn C++ or machine code or how to get the IAO from the processor to the FPGA. Solutions are available from National Instruments, for example, and Analog Devices.

One of the common misconceptions, Butler says, is that wireless technology isn’t mature enough for the industrial environment. “People say they can’t deploy it in their industrial environment, it’s not robust enough, it’s not secure, they can’t synchronize, they can’t get the data rates,” he says. “Those things aren’t true. National Instruments and other companies provide very robust wireless sensing solutions that are secure. They can do spread-spectrum frequency hopping to avoid EMI. They can be synchronized. They can send high-speed data back and forth over industry-standard protocols as well as proprietary protocols. The foundation and the deployable products are here today.”

Perhaps the biggest error is failing to perform a site survey. It can be easy to miss potential issues. Even a microwave oven can be a problem. Water resonates at 2.4 GHz, which is one of the frequency bands commonly used for industrial, scientific, and medical networks.

At this point, the adoption of wireless technology for sensors is beginning to move past the early adopter phase. It’s beginning to see significant deployment in the process automation sector. Butler points to an electrical customer that installed a vibration monitor on over 10,000 of their assets. These remote sensors are designed to detect when a bearing or fan blade or another component of a generator or turbine needs to be serviced. In discrete automation, the technology is less broadly deployed but is beginning to see a foothold in applications like automotive.

Butler, for one, is a believer. “It is not a fad,” he says. “Maybe sensors will have to get a little smaller and cheaper, but the IIoT is here today.”