Slashed budgets are pushing militaries around the world to look for good bargains, and ruggedized industrial digital imaging technology is quickly becoming a prime source for cost-effective surveillance, reconnaissance, and targeting systems.

“Adimec (Eindhoven, The Netherlands) has been serving military applications for 20 years,” explains Joost van Kuijk, Vice President of Marketing and Technology. “In the past, the military wanted customized cameras built to a detailed military specification and supported for many years. We still sell a camera to the military that we developed 15 years ago. But you can’t get military specification image sensors or FPGAs anymore; they don’t exist. Today, the military wants industrial-grade components that are rugged enough to meet military specifications such as vibration, temperature, etc. You have to make the right component choices, have the right design rules for your design, and maximize design for test and manufacturing processes. That’s where Adimec comes in.”

While cost is more important for military systems than it was just 10 or 20 years ago, performance still remains the primary consideration. Older film-based cameras provided military commanders the high-resolution imagery they needed to find targets and protect their forces, but military planners had to wait hours or days for the imagery to be developed. Analog cameras overcame this limitation but required additional shielding from electromagnetic sources and still had to be converted into digital data before military planners would be able to combine sensor data from air, land, and sea platforms into a modern C4 battlefield visualization program. Today’s industrial digital cameras offer immediate access to high-resolution reconnaissance and surveillance imagery for military applications – even from the cockpit – while making it easy to overlay all battlefield sensor and communications data into a single view for military commanders.

Additionally, new standards such as CoaXPress (CXP) are making it easier to retrofit older analog systems with newer digital systems that offer higher resolution and other performance benefits. “We think CXP is going to be huge for the military,” explains Donal Waide, Director of Sales at BitFlow, Inc. (Woburn, Massachusetts). “Coaxial cable is everywhere in military systems. Now, you can replace an analog camera producing 11 MB/s with a digital camera and CXP frame grabber, and your bandwidth jumps to 6 GB/s. That is a game changer.”

Up, Up in the Air

The movement toward high-definition cameras in military applications running at either full HD or 60 fps speeds has progressed further in airborne applications, especially with the growth of unmanned aerial vehicles (UAVs). “There’s also a trend in aerial mapping systems for much larger sensors from 16 megapixels to 100 megapixels or more,” explains Adimec’s van Kuijk. 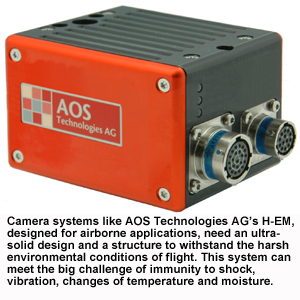 The newer digital H-EM system uses a solid-state recording medium that can be located virtually anywhere in the aircraft, overcoming one of the challenges for a military retrofit. And because it is digital, the H-EM system can provide IRIG-B time stamping, GPS, and other important information right in the image files, simplifying system complexity. What’s more, because it has no moving parts, H-EM is even more robust than its older counterparts, capable of withstanding harsh environmental conditions such as shock, vibration, temperature, and moisture while offering high dynamic range of more than 90 dB to accommodate the large intensity differences between objects in direct sunlight versus shade.

Digital imaging systems based on industrial cameras enable military system designers to add new functionality, such as automated target tracking. “As for automated processing, an automatic tracking is used quite often,” explains Reto Huber, Engineering Manager at AOS Technologies AG. “For this tracking, markers are placed on the object to track. Software then tracks these points and calculates movement, speed, etc.” Industrial cameras with square pixels – compared to the rectangular pixels of consumer-grade digital cameras – make it easier to automatically track targets and provide relevant telemetry to other systems on the ground or in the air.

“Missile tracking is one application where end users prefer square pixels and images that are easily processed using specialized algorithms,” adds van Kuijk. “They also prefer Camera Link output for many of these applications, as well as CoaXPress. CoaXPress can handle full HD video at 60 fps, while Camera Link cannot.” 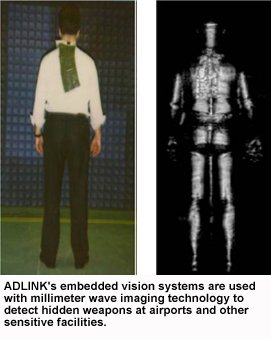 Voice data recorders are another military application that widely uses machine vision, according to Neil Chen, Product Manager in the Measurement and Automation Group at ADLINK Technology Inc. (San Jose, California). “Some systems use our video capture boards, like the HDV62, which can compress video in real time, provide color correction to differentiate between similar targets, accept both digital video and analog radar data, and combine both data streams with other information for target tracking and video analytics,” he says. “For other systems, like a recent UAV imaging system we helped develop, embedded vision systems like the EOS-1000 and -1200 provide video capture and analytic capability in a small, rugged form factor.”

One If By Land

While HD video is becoming de rigueur for many airborne military platforms, land-based systems use a wide variety of sensor types, from HD to VGA, visible to thermal to millimeter wave, and more.

According to van Kuijk, many land-based vehicles still use UXGA sensors rather than HD or high-resolution sensors – not because military designers prefer lower resolution, but because of the limitations of the in-vehicle display systems. “You have to be backward compatible,” explains van Kuijk. “It’s not enough to just put new camera on a vehicle, you have to have the right infrastructure to display the data.”

The main driver behind land-based imaging systems is to protect the soldier, allowing him to see long distance without having to emerge from the cover of the vehicle. “Many of these platforms are going to multiple cameras to see all around the vehicle, as well as farther away – from a few hundred meters to 4 km away,” continues van Kujik. “Resolution is important, as are the optics, but the color response of the camera and reproduction at the display need to be very accurate too so you can tell the difference between orange and red trucks, for example.”

ADLINK Technology’s frame grabbers are regularly used in a variety of land-based military applications, from weapon detection using millimeter-wave sensors to border protection employing a variety of thermal and visible cameras. “Border patrol applications, for example, need to be small to fit in the vehicle and be able to accommodate multiple cameras, so designers will often choose an embedded system with GigE I/O to reduce the overall footprint and accommodate multiple cameras,” Chen says. “And of course we have embedded systems that can handle up to 5G of vibration and work well in temperatures ranging from 0 to 55C.”

Camera Link. Gigabit Ethernet. CoaXPress. While some machine vision designers often prefer one network protocol over another, military applications prove that there is a place for many different network protocols as long as they share one common element – digital data.

“When you add in many portable systems, the number of sensor streams pouring into a command center can easily overwhelm a person’s ability to efficiently react and plan,” concludes Adimec’s van Kuijk. “And they’re not just sharing with central command, but with each other. It is a lot easier to share digital data than analog data, and that’s a big reason why all these military systems are being upgraded to HD and digital. All the sensors need to be coordinated across the battlefield. That’s a trend that will continue for some time.”