Imaging Applications Use LEDs to Span the Spectrum

As more color cameras add infrared bands to their existing red, green, and blue channels, the machine vision market is seeing a resurgence in multispectral imaging solutions that once were only affordable by government institutions. Both multispectral and hyperspectral imaging applications require measuring the reflected energy from an object within bands of the electromagnetic spectrum. While multispectral vision systems may only sample between three and 10 different bands such as RBG and near infrared (NIR), hyperspectral systems may sample as many as 200 or more. 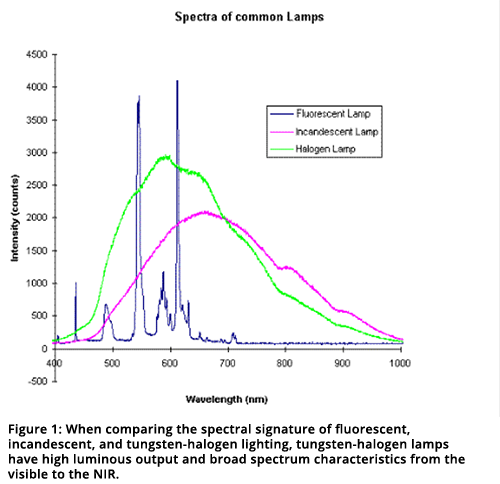 In hyperspectral imaging applications, a broad flat spectrum illumination method is required so that a hyperspectral camera may acquire hundreds of sample frequencies across the spectrum that are illuminated with an equal intensity. When coupled with hyperspectral cameras from Specim (Oulu, Finland) or Resonon (Bozeman, Montana), system designers can solve extremely difficult quality assurance applications, such as distinguishing cooked chicken nuggets with two types of blemishes.

Until recently, tungsten-halogen lamps and lighting controllers were the most common sources of illumination for both multispectral and hyperspectral machine vision applications. Advantages of using these illumination methods include their low-cost, high luminous output and broad spectrum characteristics from the visible to the NIR (Figure 1). At the same time, however, such lamps generate a significant amount of heat, have a relatively short lifetime of approximately 2,000 hours, and, as they age, are vulnerable to failures from shock and vibration.

Because of this, many developers looked to replace incandescent lamps with LEDs. While they may not produce the same luminous output or the same color rendering index (CRI) as tungsten-halogen lamps, LEDs do not suffer from shock and vibration failures and can exhibit lifetimes of 50,000 hours or more. In established markets such as fluorescence microscopy, products such as the OptiBlocks family from Prizmatix (Givat-Shmuel, Israel) are already employing high-power white LEDs that can be used as a collimated light source coupled to a liquid light guide or optical fiber. In this type of design, the aim of the white light output is to be as linear over the electromagnetic spectrum as possible.

White Light, Less Heat
While many such units use blue-excitation LED ICs with either a green and red phosphor or a yellow phosphor to achieve a close-to-white light, CCS America (Burlington, Massachusetts) uses a violet excitation-type device with a blue, green, and red phosphor to achieve a high CRI in its Natural Light High Color Rendering LEDs. Because the devices use violet excitation and include all wavelengths of visible light from violet to red, they have characteristics extremely close to natural light from the sun (Figure 2).

Other companies have taken a different approach to producing broad-spectrum lighting, instead using numerous LEDs with different frequencies in their designs. How many LEDs necessary to accomplish this task is debatable.

Visual computing scientist Chloe LeGendre and her colleagues at the USC Institute for Creative Technologies (Playa Vista, California) have shown that, by analyzing 11 Luxeon LEDs from Lumileds (San Jose, California), as few as five LEDs of distinct spectra can be used for color-accurate multispectral lighting reproduction. These include red, green, and blue LEDs with narrow emission spectra, along with white and amber with broader spectra. To date, a number of companies have taken the approach of using multiple LEDs to produce broad-spectrum illumination products. 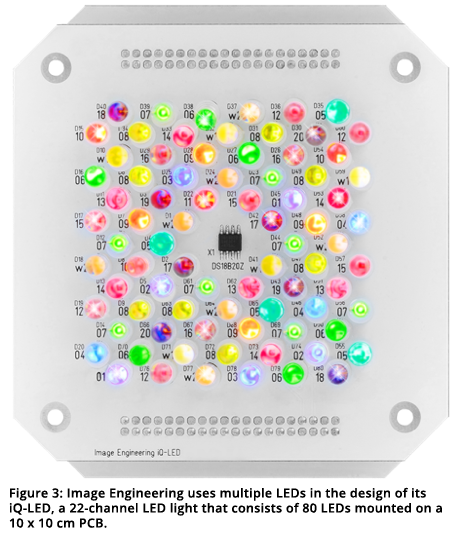 With its Sun Simulator, Prophotonix (Salem, New Hampshire) has shown that the number of different wavelengths used in the design will dictate how accurately the spectrum produced by the LEDs will match the spectrum of the sun. The company found that using 20 or more different wavelengths rather than four accomplishes this task more accurately. When compared with the solar spectral standard given by a ASTM G-173 AM 1.5 (shown in blue), the 23-wavelength LED Sun Simulator closely approximates that of the standard.

Like Prophotonix, Image Engineering (Kerpen-Horrem, Germany) uses multiple LEDs in the design of its iQ-LED, a 22-channel LED light comprising 80 LEDs mounted on a 10 x 10 cm PCB (Figure 3). The device generates standard daylight distribution illumination from 400 nm to 820 nm. Light from the iQ-LED closely compares with that of the CIE Standard Illuminant D65, which portrays standard sunlight and diffuse illumination conditions. For developers looking to incorporate the light into their systems, Image Engineering provides an application programming interface (API) written in C++.

Fibertech Optica (Kitchener, Ontario) has taken a different approach in the design of its multiwavelength LED light source. Using a proprietary fiber-coupling method, the company combines multiple LEDs in a fiber bundle that is configurable to a specific required spectral distribution capable of spanning the UV-to-NIR spectral range using a selection of discrete LEDs (Figure 4). 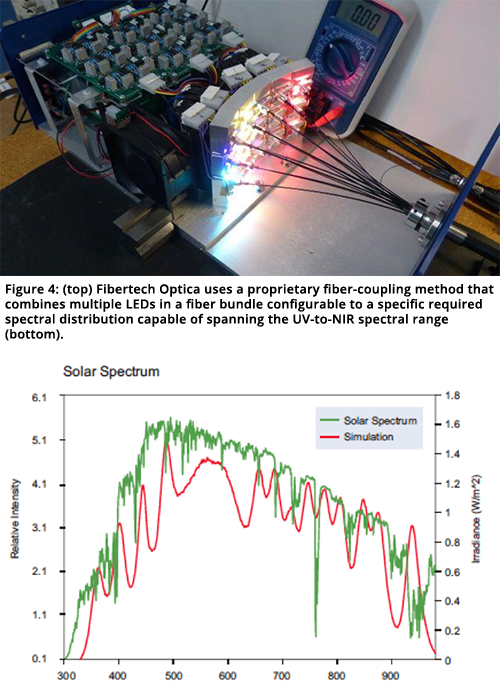 Multispectral on the Production Line
While the aforementioned products may target niche applications such as fluorescence microscopy and biomedical and spectroscopy instrumentation, other hyperspectral illumination is firmly directed toward machine vision. In line scan imaging, for instance, numerous LEDs can be used to develop line lights that provide uniform light sources. One example is the VNIR series of line lights from Metaphase Technologies (Bristol, Pennsylvania). Using a combination of broadband blue (350–500 nm), broadband daylight (480–780 nm), and NIR LEDs, the line lights employ diffusers and focusing lenses to provide uniform illumination over the visible-to-NIR spectrum.

Smart Vision Lights (Muskegon, Michigan) also uses multi-LED configurations to produce backlights with a uniform illumination. Its white infrared (WIR) backlight provides an output across the 450–980 nm spectrum with one broadband white LED and two IR LEDs. However, as Matt Pinter, Director of Engineering at Smart Vision Lights, explains, achieving a flat spectral response across the broad spectrum demanded by hyperspectral imaging is expensive and unnecessary for machine vision systems that generally use multispectral imaging.

In multispectral imaging applications, multicolor inspection lights such as the Dual-Axis RGB LED Light from Smart Vision Lights and Metaphase Technologies' multispectral backlights and line lights use a number of discrete red, green, blue, and IR LEDs, allowing both companies to tailor the wavelength and spectral response of the light. In the case of Smart Vision Lights' line light, both the intensity and RGB color values can be independently mixed for product inspection tasks that exhibit highly reflective finishes.

Smart Vision Lights' Pinter expects greater adoption of multispectral RGB/SWIR (shortwave infrared) imaging as the cost of cameras comes down — less than $10,000 for SWIR, for example. Combined with lower cost hardware, camera and lighting manufacturers continue to expand their multispectral products and in turn create more imaging options for their industrial and medical customers.