| By: Keith Shaw, A3 Contributing Editor 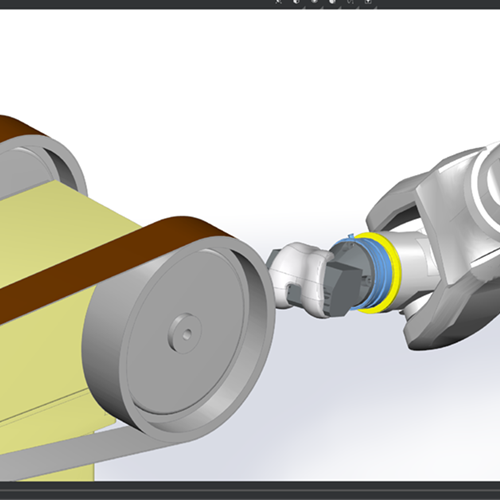 Faced with ongoing labor shortages for skilled workers who can perform finishing and surface treatment tasks, many in manufacturing are turning to robotics and automation to help them keep up with rising demand for more accurate and repeatable results. Advances in hardware and software have opened new doors to smaller and midsize manufacturers to take advantage of the benefits robotics and automation provide.

However, many potential pitfalls could be in store for companies that believe buying a robot to complete finishing or surface treatment tasks is a turnkey process. Experts in robotics and those who understand robotic finishing have many tales about customers who became enamored with the possibility of robots performing specific finishing tasks, only to be overwhelmed by deployment and programming issues. Many of these robots end up collecting dust in the corner of a factory floor, with understandably skeptical customers afraid to attempt another deployment.

For a robotic finishing or surface treatment task to succeed, companies need to have a solid manufacturing automation plan in place. Once the automation tasks are defined, then strategic partners and robotics experts are chosen to help with deployment, integration into existing processes, programming, and training to achieve optimal results.

Not a new process

Robotic finishing and surface treatment is nothing new, at least in some sectors of industry. In the automotive and aerospace sectors, large industrial robots have been performing these tasks for decades. Finishing tasks can include processes such as sanding, polishing, buffing, grinding, deburring, along with surface treatment tasks such as painting, coating or sand blasting. But in those cases, the parts being finished are always the same, with little to no variation. Those robots are generally programmed through a teach pendant just once, and the robots produce the same result each and every time.

“About 35 years ago we noticed that some of our biggest customers were looking to automate, and some of them were looking to automate using robotics,” says Scott Barnett, Global Application Engineer Director at 3M Corp., which produces abrasive materials such as sandpaper and other finishing tools. “We realized even back then that our portfolio of abrasives and our process experience could help people automate with robotics.”

The company invested in a robotics lab and developed expertise to help companies evaluate the best tools and processes to automate finishing and surface treatment tasks. 3M now boasts 17 different robotics labs around the world that assist customers with evaluation and decisions about parts and processes that can be automated.

While large manufacturers were the main users of robotic finishing tasks, this left smaller and midsize manufacturers with high mix or high variability of their parts searching for automation answers. The cost of automation for these customers was so high that it priced many out of the market.

Over the past few years, new robot systems, including light industrial and collaborative robots, have entered the market that reduce the cost for robotic finishing. Innovations in sensors have reduced costs as well, and computing power has increased to allow for better motion planning and tasks for these systems. Robots-as-a-service and other subscription models are allowing small and midsize companies to take advantage of robotic finishing and surface treatment solutions.

GrayMatter Robotics is a young startup that provides intelligent automation solutions in the robotic finishing space. The company’s Scan&Sand solution is a flexible robotic sander that can adjust to different object sizes and shapes within minutes. The software quickly and precisely adjusts to different objects with complex geometry. GrayMatter Robotics was founded by several members from the Center for Advanced Manufacturing at the University of Southern California.

“We were surprised because we did not understand the high-mix nature of many parts that manufacturers were looking to complete,” says Ariyan Kabir, co-founder and CEO at GrayMatter Robotics. “At the time, we were asking companies, ‘Why aren’t you just using robots like all of these automotive industries?’ Especially for some large companies like in aerospace, they’re not short of cash. They explained to us how their operation is high mix, with variations and variabilities coming from geometry, material disruption and multiple SKUs. It wasn’t economically feasible for all of them to keep on programming a robot for every small change. That intrigued us, and brought us into the thinking of how to enable robots to program themselves.”

Robotmaster software, by Hypertherm Associates, is one such programming tool. “We noticed that manufacturers weren’t just using our software for a single application,” says Natalie Adams, Strategic Product Marketer at Hypertherm Associates. “Often they are working on completing a part, which goes through different processes. It might start with robotic cutting, then welding, then grinding, then finishing. There is value in automating and using offline programming for each of these processes, but there is even more value if the entire stream can be programmed with one solution with the flexibility to use multiple different robots if desired.”

Adams says finishing was not an application that was traditionally automated using robots, as the trajectories are generally too complex to create a program that is repeatable and accurate with a teach pendant. “If you picture moving a toy crane, for example, your movements aren’t very accurate,” says Adams. “When programming a finishing application, you need to be very accurate to achieve a consistent finish. We have been able to enable the use of robots for this application, and are working well with 3M to drive the industry for the use of robots for finishing.”

Innovations in robotic finishing come at a critical time – labor shortages in this space continue to put pressure on manufacturers to find better options to address demand for finished parts. A generation of Baby Boomers that were once skilled artisans in sanding, deburring and other processes are not being replaced with younger workers at the same rate. Often, a younger worker will be on the job for about two weeks or two months at most before they leave and look for other jobs. Like other industries facing labor shortages, automation tends to be a potential answer.

The good news for many of these new solutions providers is that customers are already recognizing that they need to automate – there’s no need to try to convince them on the benefits of automation compared to manual processes.

“Customers have recognized that they’re already thinking about automation, especially with COVID the last few years that accelerated their thought process,” says Kabir. “They’re presold that they want to adopt robots.”

The larger question for potential customers is whether robots can address their specific problems. Is it possible to perform a robotic finishing task on their specific part? What are the limitations of a robotic system? How would it integrate into an existing workflow? How should the operators be working with the robot? What are the training processes like?

“A lot of these questions become an educational process for us to let them know, “Hey, this is not science fiction – this is possible today,” says Kabir. In many cases, customers have attempted to purchase and deploy their own robot, or worked with a system integrator that didn’t understand the high-mix or variability of the customer’s part. “Or they come in with a preconceived notion that they have to spend hundreds of thousands of dollars to automate, and they think that it’s too big of a risk,” he adds Because of GrayMatter’s subscription model, many of these risks and upfront costs are reduced or eliminated – customers can hire a robot just as if they were hiring a human worker.

Those with the expertise in the robotics finishing space agreed that customers looking to begin their journey should engage with partners and robotics solutions companies early in the process, before they consider whether they are even going to use a robot in the first place. This could mean working with integrators, or engaging with companies such as 3M, Hypertherm Associates and GrayRobotics before even making the purchase. In some cases, robotics might not even be the correct answer for a particular robotic finishing task.

“There are scenarios where fixed automation might make the most sense, because it might not require the extensive programming because it’s a simple feed-through process,” says Barnett. “Or in some cases, you can still leverage robotics with fixed automation – you can use robots to tend the machine, feed parts with robots or have them unload finished parts.”

Adams says working with partners and integrators are key for these types of tasks, since they spend time with the customer understanding their overall automation requirements. “If we are working with a potential customer and based on our initial assessment we determine they could use a partner, we will put them in touch with one of our integrator partners so they can do an assessment of the customer’s overall automation needs, requirements, and expectations” says Adams. “If we’re a part of their solution, that’s great. If there isn’t a need for offline programming software, then the customer is left in our partner’s very capable hands and can continue to work with the integrator to achieve their automation goals.”

Once a task and solution is decided, companies should start small with a specific part or task that can guarantee quick success, rather than trying to do everything all at once. “Start with the lowest-hanging fruits, get the biggest success early on and then create a roadmap for other tasks,” says GrayMatter’s Kabir. “One of the expectations we set with customers is that if we can do 80% to 90% of the automation, and the last 10% to 20% is done by humans, that is still significantly more economically feasible than attempting to automate 100% of the time, due to the costs and complexity.”