Glass manufacturing is a continuous process that involves enormous thermal masses, both in the glass melt and in the production line itself. Depending on the type of machine, once commissioned it may run round-the-clock for a decade or more. Others may go through changeovers as often as several times a week. In either case, reliability is essential, as is performance.

Float glass gets its name from its manufacturing process in which molten glass forms into a several-meter-wide ribbon atop a pool of higher density molten metal such as tin. The glass undergoes stretching, edging, and annealing prior to reaching the cool end of the line. At that point, the ribbon must be cut into useful dimensions and stacked. This is where motion control comes in.

Float glass is not cut, per se, but rather scribed to create a line of weakness, then broken along that line by elements known as snap rollers. Although it sounds simple enough, the execution can be quite challenging.

The x-axis cut, or scribe line, runs across the direction of flow. As for many web processes, the x-axis scribe line takes place at a precise angle off of the perpendicular of flow to produce a right-angle cut without stopping the ribbon. This requires precision not just in direction of cut but timing.

The y-axis cut runs parallel to the direction of flow. The scribe wheel must drop down, contact the glass for a exact period of time, then retract immediately in order to yield sheets with the right dimensions and shapes.

Although float-glass manufacturing is a web process like plastic-film or paper manufacturing, the stakes are higher with glass -- an error in velocity or synchronization produces not crumpled plastic but a pile of hot, shattered glass. The melt that forms the ribbon requires a certain percentage of 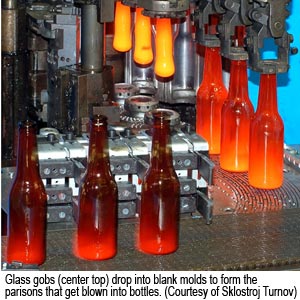 recycled glass known as cullet, so broken glass that results from a line failure can still be used but the failure does represent wasted manufacturing time and squandered energy. The precision and high feedback supplied by motion control help ensure quality cuts with no interruption in the motion of the ribbon.

The ribbon typically undergoes multiple y-axis cuts, with larger plates shifted to subsidiary lines to be further split up. Indeed, fabrication machines can include as many as 16 cutting heads along the y-axis. It's a process that lends itself to modular design and control structure. “It's simple positioning but you have to look at the coordination between all these different heads as they're getting the information,” says John Ryan, Glass Industry Development Manager at Siemens, (Norcross, Georgia). “The actuation of the cutting heads requires microsecond precision.”

Unlike most web processes, glass fabrication is highly temperature dependent. A float glass line cannot simply be turned on and turned off. "It's not a batch process where you run some and you get a break," he adds. "You build a furnace, turn it on and then it makes glass continuously for about the next 10 to 15 years."

In other words, the automation technology that runs line needs to be highly reliable. Any faults need to be easily diagnosed and repaired. That is where today's smart motion-control components come in, offering easy diagnostics and plug-and-play operation.

Pressing Glass
Hollow glass products are manufactured by pressing gobs of molten glass into shapes such as carafes or bottles (see http://www.youtube.com/watch?v=on-_oUajNso). They are manufactured in individual section (IS) machines, which feature modular, parallel processing designs that allow sections to be selectively shut down for maintenance or changeovers while allowing glass to continue to flow without interruption. Depending on the number of sections and the size of the products, an IS machine can run as fast as 700 parts per minute. 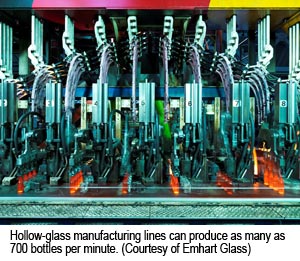 The process starts by conditioning the molten glass in a ceramic bowl called the feeder. Glass is extruded through the orifice ring of the feeder, driven by servo-controlled needles. It’s then cut into gobs that drop down into a manifold structure known as a distributor. The shape and size of gobs vary depending on the parameters of the finished product. The distributor loads the gobs into various sections of the machine in a particular order. The glass passes into blank molds which form it into precursor shapes known as parisons.Depending on the specific process, the parison will be formed into the final vessel either by mechanically creating a depression in the glass with a thimble and blowing in air to expand it out into the mold (press and blow) or by using a jet of air to create the initial depression and blowing in additional air to expand it (blow and blow). After removal from the blank molds, the parisons get transferred to the production mold where they’re expanded by air.

After the two-part mold opens to release the vessels, the takeout mechanism removes them and suspends them over a "dead" plate which air cools the bottoms to ensure they don't collapse under their own weight. During the takeout process, the bottles are still hot enough to fuse together when they touch, so they must be transferred onto the conveyor belt at an exact spacing. A sweep-out mechanism transfers them to a conveyor belt where they pass into and annealing chamber known as a lehr, where they are heated and slowly cooled to eliminate internal stresses that might lead to spontaneous shattering later.

Going Servo
Through most of the 20th century, pneumatic and hydraulic technology dominated IS machine design. By the 1980s, class manufacturers found themselves pressured to further reduce prices with technology that they had already taken to peak efficiency. The question was how. "There are three elements to cost: the amount of energy they use to make the glass, the labor and capital investment in the machines, and the material itself, says Sus Datta, Business Development Manager at Cleveland Motion Controls Inc. The increased precision and repeatability presented by motion control allowed manufacturers to reliably produce lighter, thinner bottles. “If you go back to the old days when it was all mechanically done, you would see that the 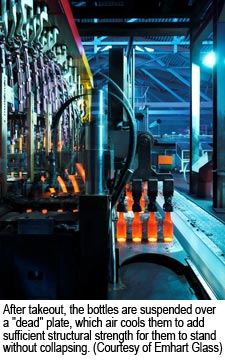 thickness of the bottles is much greater than today. Motion control also gave the position of the product so they could increase the speed of the process two to three fold.“

Initially, machine builders began leveraging servomotors for intake and outtakes steps. IS machine builder and glass manufacture Owens-Illinois, for example, leverages servo-motors in the gob formation and take out areas but uses pneumatics for blow and mold operations. “We’re looking at about 30 servo axes for peripheral functions,” says Wayne Leidy, Manager of Research And Development, Process Innovation at Owens-Illinois Inc. “The machine itself has anywhere from eight to 12 sections, with probably 12 or 13 axes on each one.”

In the 1990s, machine builders began expanding the use of motion control in an attempt to gain further advantages. Emhart Glass SA, for example, released an all-servo machine, the NIS, that it still manufactures today. The line consists of eight, 10 or 12 sections, each with a maximum of eight servo axes. Communications takes place at the microsecond level, over Ethernet via CANOpen. Meanwhile, Sklostroj Turnov CZ s.r.o. has teamed with Siemens to release its own all-servo machine called the ISS. This machine has from nine to 17 axes per section, all coordinated over Profinet.

The switch to an all-electromechanical design provides big benefits. The processes in IS machines tend to be highly interlaced. One arm needs to come out of the work envelope, for example, before another can move in. In this type of situation, the very nature of pneumatic actuators can pose a problem. “A pneumatic actuator has an air cushion, you really don't know where it's going stop " says Stephen Austin, Manager of Process Automation and Simulation at Emhart Glass Research Center. “You need to do a lot of tuning in a pneumatic machine to make sure things aren’t going to be colliding. With servos, you know exactly where the starts and stops are. You also have better control of accelerations and jerk. It's all based on motion control in order to increase the repeatability, control, set up, and operation of the machine. It will cut your cycle time. You also will be able to eat into those collision zones, have a tighter tolerance between moving machine elements producing the container.”

Another important attribute of motion control is flexibility. Although single-use machines to exist, in today's economy, companies need greater flexibility. They might find themselves making baby-food jars one day and champagne bottles the next. With a machine based on servo axes, changeover can take hours, not days. Once the machine has been tweaked to generate the right motion profiles to produce a given product, the recipe can be stored for future use.

Hot Stuff
Motion control components can provide big benefits, but first they have to survive punishing environmental conditions. Hollow-glass fabrication takes place at temperatures ranging from around 2700°C at the melting furnace to 750°C and 900°C at the take-out point, and motion control is right in the middle of the hot end. Special carbon-based lubricants and dies might help the system survive the heat but also introduce significant contamination. To compensate, design engineers use resolvers rather than encoders, and sequester drives and controllers in cooled enclosures or control rooms.

Of course, the trade-off is a significant increase in the run of cable, which traditionally constitutes a single most common point of failure in motion systems. To increase cable lifetime, machine builders protect it in cableways and restrict it to lower-temperature regions where possible. When necessary, they use structured cable with jacketing designed for high-temperature applications. "Where you're going to have some flex or expose the cable to high heat, you try to make short pigtails, connectorized both ends so that if you have a failure you can change it really quickly," says Leidy.

Indeed, avoiding failure and minimizing downtime are key. A fault doesn't just create a jam of cardboard blanks. If a line truly goes down, the cost in terms of lost production time and time spent cleaning up can be enormous. “The system can't fail,” says Datta. “If a glass plant goes down the cost could be in the millions of dollars. To bring it up again takes two or three weeks, so reliability becomes a major issue.”

“Mean time to failure and mean time to repair are very important parameters for us,” agrees Leidy. 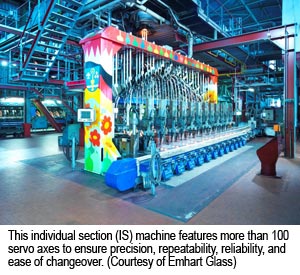 Power conditioning assumes a more important role, for example. Protection can range from active line modules to capacitor banks that allow the system to survive voltage spikes. Modular design and intelligent plug-and-play components also help. If module fails, the approach is to swap it out and repair the module off-line. "You don't want to do any more troubleshooting on the production floor than you have to,” Leidy notes.

Fans or chillers do a fine job of extending motor lifetime in the face of high temperatures. The downside is that they represent another subsystem, increasing complexity, part counts, maintenance, and cost. A better choice is to oversize the motors. Proper heat shielding can reduce effect of ambient temperature to around 200°C, which is not all that extreme for ruggedized motors.

Brushless motors provide a more robust solution then brushed versions, which are not only inherently subject to wear but prone to arcing and electromagnetic interference. Early brushless motors suffered from torque ripple. The problem has been largely solved now with commutation control, says Lee Stephens, senior motion control engineer at Kollmorgen (Radford, Virginia). “With today's advances in both the electronics and the control system, we can have performance that rivals anything from high-pole-count brushed motors,” he observes. “The lifetime of a brushless motor today is really based on the bearing life because the motor itself is not going to wear out.” For an application that imposes hundred-percent duty cycles, that's an important attribute.

How to assemble the E8T & E4T optical kit encoder | US Digital