Get the Most Out of Your Bearings

Properly sized, installed, and lubricated, bearings will keep your system performing at its best.

Bearings play an essential role throughout motion systems, whether in the motor, the encoder, the actuator, or elsewhere. Bearings provide support and stability while converting sliding friction into rolling friction, allowing the system to position the load with less torque and greater speed. The right bearing can reduce power consumption, increase lifetime, and enhance overall system performance. The wrong bearing can lead to premature failure, increased downtime, and increased wear and fatigue among all components of the system. Let's take a closer look at how to choose the right bearing for your system with an emphasis on trade-offs and the best way to achieve the desired performance.

A rotary bearing consists of a series of rolling elements trapped between an outer ring, or race, and an inner race. A cage holds the rolling elements in place, keeping them from touching one another during rotation, which minimizes friction (see figure 1). Although a wide variety of bearings exist, motion control systems most commonly use ball bearings and roller bearings. Ball bearings carry the load at specific points, while roller bearings apply a line load.

Ball bearings can accommodate very high speeds and excel at heat dissipation, but because they only feature a point contact, they cannot support high loads without risk of premature failure. In contrast, a roller bearing distributes the load across a line rather than a point. Roller bearings may be cylindrical, spherical (the inner surface of the outer race has a spherical shape), tapered (the bearing features tapered rollers and an inner and outer race angled like the frustum of a cone), or needle shaped. The downside of roller bearings is that the increased surface area adds friction, which generates heat and limits their top speed.

We can split up the force applied to a bearing into the radial load, which is perpendicular to the shaft (e.g., the load applied to a dockside crane) and the thrust load, which is parallel to the shaft (e.g., the force applied by a ram-style actuator). Each type of bearing has the ability to handle a characteristic ratio of axial load to radial load. Tapered roller bearings, for example, excel at handling both high radial forces and high thrust forces (see figure 2). Deep-groove ball bearings likewise accommodate high radial loads. Sometimes, the best solution is a mix of the two. “Tapered roller bearings can handle higher degrees of axial load to radial load than a spherical roller bearing or deep groove ball bearing," says Ian Rubin, director of marketing for mounted bearings at Emerson Industrial Automation. “You’re going to typically have two bearings to support a shaft. You can design it so that you maybe have an angular contact bearing to handle that thrust load and a deep-groove ball bearing to take care of the radial load." 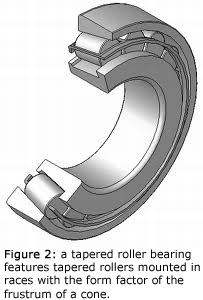 What about an application that requires both high-speed and heavy load? The best approach is to analyze the application carefully. Are you working on a crane that will be handling a load of 100 or 200 pounds for 99% of the time but occasionally needs to tolerate a 1000-lb load for very short periods? Your best bet is to design around the most common load, but build a system that could intermittently handle load spikes. Yes, the spikes will degrade lifetime, but if the loading is intermittent or takes place a very low speed, you can probably design a system that can accommodate the issues.

Choosing a bearing
It's easy to get caught up in choosing a motor and drive, integrating a gearbox, writing the controls program. All too often, designers leave the choice of bearings for last. For best performance, though, they really should specify the bearing up front during the mechanical design of the system. Address the issue too late in the process, and there may be no good solution. “Someone will come in and say, ‘Hey, I’ve got this design kind of roughed out with these loads and this much space for a bearing," says Scott Lafalam, application engineer with Timken. (Keene, New Hampshire). “And we have to come back and tell them it's not possible to physically design a bearing with enough load capacity to meet those requirements. They need more space for the bearing. They have to go back and redesign or come up with other options.”

For high-speed, high precision applications like machine tools, preloaded angular contact ball bearings deliver the best performance. Preloading them during installation limits amount of radio play in the shaft the bearing is supporting. When it comes to heavier loads that will involve some misalignment, spherical roller bearings provide a good solution. If the application requires high stiffness, tapered rolling bearings used in pairs can enhance stability. At higher speeds, a cylindrical roller bearing will likely provide the best performance.

It's important to note here that simply over sizing the bearing to accommodate high loads is about solution. Granted, an undersized bearing may fail prematurely, but if the bearing is oversized, the balls or rollers may skid instead of rolling. This generates friction, which in turn creates heat. Skidding can damage the races, which will in turn affect the rolling elements. The net result is early failure. Preloading a bearing to ensure that the rolling elements role can help prevent this problem.

Lubrication practices
Perhaps the biggest source of failure in bearings after improper specification is poor lubrication practices. L10 lifetime - the point at which 90% of a given block of identical bearings will still be operating - is predicated on proper lubrication. Lubrication performs a number of important tasks. It minimizes friction, it helps transfer heat off of the rolling elements, and it can also help remove contamination, increasing lifetime.

To properly select a lubricant, you need to fully understand the operating environment of the system. What is the expected operating temperature of the bearing? Are there any external heat sources? Does the process take place in an oven or a freezer? A hot environment or a cold one? All of these points need to be reviewed prior to selecting a lubricant.

Heat tends to make oils and grease less viscous while low temperatures make them more viscous. At high viscosities, the grease may actually increase the load on the bearing and motor, creating heat and introducing premature failure. At low viscosity, the grease or oil may not remain on the rolling elements, causing them to dry out and suffer the same sort of issues as are introduced with skidding. For systems operating under extreme temperatures, oil drip or oil mist systems may provide the best solution.

Re-greasing bearings must be done on the appropriate schedule and with careful attention to best practices. The alternative is the sealed-for-life bearing. It's important to understand what that entails. It is not a question of a bearing with endless lifetime, but rather that the operating lifetime of the bearing is shorter than the lifetime of the lubricant used inside.

Bearing problems
Because bearings lie at the heart of virtually every motion system, a problem with the bearing creates a problem with the system¾and vice versa. It's important to evaluate faults within the context of the system. “The number one symptom we hear about is, ‘I have a hot running bearing,’” says Mike Cutler, applications engineering manager with SKF USA. “What affects operating temperature? You name it - maybe the bearing sits too tight on the shaft, maybe it's running faster than it should be or subjected to too high a load. Really, just before you get to a catastrophic failure, temperature is the easiest thing to report." It is also the last thing to happen before the bearing finally fails.

Part of the problem with improper bearing choice is that it has ramifications throughout the system. "Depending on the application, a minor shift in wear in the bearing could damage equipment elsewhere in the system," says Rubin. "If you get a little bit of wear and it shifts the belt over and you don’t catch it, then your belt starts to wear, which puts extra stress on your motor and next thing you know your motor gets burnt out. We’ve seen that. You replace the motor and the same thing happens because the system wasn’t aligned."

“We were dealing with a fan application for a customer in the drug industry," says Cutler. "He said, ‘you know, if we lose this fan unexpectedly, we lose the product that it’s processing, which is to the tune of $1.5 million.’ The bearing cost only $50 that they were using in this application." The moral of that particular story is that the cost of the bearing needs to be evaluated within the context of the costs of downtime. “Years ago there was a Fram oil filter commercial with the tagline, ‘You can pay me now or you can pay me later.’ Nobody can avoid everything and no product is failsafe, but by properly selecting upfront, you have less risk, you can plan for maintenance, you can plan for downtime - or, you can skip it and pay the price afterward.”

Ultimately, your best approach to specifying the essential piece of support equipment is to consider early and work closely with your vendors. Don't forget to communicate with your end users, as well. Although you may have designed a machine to operate as a specified speed, all too often the natural response of the user once the machine is installed is to make it operate faster. In such a case, you need to go back to your vendor and find out what you need to do to make sure the system can accommodate the new operating conditions. With proper planning, your bearing will optimize system performance and ensure that it lasts for a very long time.

Automate 2015 A Big Success For Exhibitors