Get a Grip: Choosing a Gripper for your Robotic Application 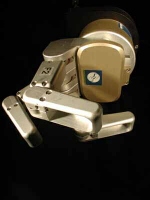 There are numerous types of grippers on the market, both in style and power source. Determining which is the best type to use is an important issue that robotics users must face.

'There are advantages and disadvantages to each type of gripper, and they are sometimes subtle,' says Pam Billings, vice president of marketing at Applied Robotics of Glenville, NY. This would apply to those powered by pneumatics, electricity and hydraulics. The same is true for parallel and angular styles, and those with two or three jaws.

The Source of Power
'By far, most grippers on the market are pneumatic because they are easy to apply. If pneumatics are the defacto standard, what would be the advantages and disadvantages of using something else?' queries Walter Hessler, PHD Inc.'s vice president of sales and marketing. PHD is a maker of grippers based in Fort Wayne, IN.

Because pneumatic grippers have no motors or gears, it is simple to translate the power of a piston/cylinder system into gripping force. Most manufacturing facilities already have compressed air, so little effort is required to bring it to a gripper in a cost efficient manner.

'Pneumatics are better known because they have been around for fifty years and they keep costs low. Pneumatic grippers are more of a legacy system,' adds William Townsend, president and CEO of Cambridge, MA's Barrett Technology, Inc.

Pneumatics put out a high amount of gripping force in a small and light package. This is critical when limited space is a factor or when keeping the mass low on the end-of-arm tooling. Also important is their low costs.

'Today, a pneumatic gripper could be bought for $150 to $400, while an electric version would be $900 to $1,000, on up, depending on the complexity,' states Hessler. For high-speed applications maneuvering light to moderate loads, pneumatic grippers are hard to beat.

There are some hydraulic and electric grippers that are a cost effective alternative to pneumatics. The primary advantage of a hydraulic actuator is its gripping power.

'Hydraulic power is used when there is a need for extra gripping force. Because hydraulic fluid is not a compressible medium as is air, there is more gripping power available,' asserts Applied Robotics' Pam Billings.

There are disadvantages associated with hydraulics. 'Hydraulic grippers are more costly and they are generally less accurate than pneumatic or electric,' says Bernd Dehne, engineering manager at Robotic Accessories of Tipp City, OH.

Hydraulic grippers have the disadvantage of being not suited for cleanroom applications. Pneumatic grippers are common because they are clean, especially when compared to hydraulics.

'There might be more strength in a hydraulic gripper, but they are messy and much more costly to maintain,' claims Billings.

Likewise, PHD's Hessler says, 'The downside of hydraulic is that there is the need to deal with oil, a pump and a reservoir. In robotics, it is undesirable to have anything hydraulic around. Robot users don't want the oil or the mess, and don't want to take the chance of a leakage. Most hydraulically operated robots have been replaced with electric for just this reason.'

Electricity is the other major option when looking for a source of power for robotic grippers. 'Electric grippers are a fairly new technology. They have not been cost effective until recently,' states William Townsend of Barrett.

Electric grippers are suitable for applications that require high speeds and for those requiring light or moderate grip forces. Electric is cleaner than either pneumatic or hydraulic. 'Electric grippers do not put out any dirt or particulate, so they are good for cleanroom operations,' notes Townsend. This is vital when handling circuit boards or other dust sensitive products.

The major advantage of electric powered grippers is control. A microprocessor can be added to an electric gripping system which can be made to vary clasp force and velocity. Such a sensor can be added at little additional cost, making the gripper more able to cope with a variety of sizes and shapes. This diminishes the need of changing grippers to accommodate different types of parts.

'Pneumatics are not very controllable. Typically the valve which controls the gripper is fully opened or closed. With electric, it is relatively easy to add a stepper motor to control the gripper as to how far it opens and closes. This adds flexibility and the capability of varying grip force with ease,' remarked Hessler.

'Electrical grippers are better for making measurements while manipulating the object, and for finer positioning,' contends Bernd Dehne.

Speaking to the finer control of electric grippers, Townsend adds: 'If there are microprocessors involved, they can measure the part to see if it is the correct size and shape. In microseconds such a system can determine if the part is too large. If so, the chuck won't release yet.'

This saves time and materials. Take, for example, the production of ceramic catalytic converters.

Until recently, catalytic converters were cylindrical. Automakers wanted them to fit under the car better, requiring the shapes to vary. The shape can be changed on the fly, so 1,000 of one shape can be made then 1,000 of another can be processed while remaining on line. An electric gripper is easier to integrate in this production environment, according to Townsend. 'With electric, integrators can prove in minutes that a gripper system will work. The longest this ever took was five hours, for injection molded plastic parts in cars.'

There are drawbacks to electric grippers. 'The disadvantage of electric is the grippers tend to be a bit larger because you have to work the motor in, and they tend to have less force than pneumatics,' says Hessler. Electric grippers are generally more costly, at least for the time being, according to industry veterans. 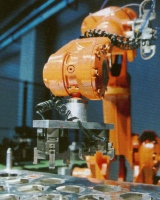 Gripping in Style
The configurations of grippers include parallel and angular styles, and those with two or three jaws.

Parallel jaws move in a motion parallel in relation to the gripper body, while angular jaws open and close around a central pivot point, moving in an arcing motion. Determining which gripper to use is dependent on the specific needs of an application.

'Generally, an angular gripper is used when you need to get the tooling out of the way. A parallel gripper is used for pulling a part down inside a machine because the fingers fit into small areas better. Space constraints might lead to the use of parallel over angular,' says Todd Scott. Scott is a pneumatic product specialist at Parker Hannifin's Automation Actuator Division, based in Wadsworth, OH.

'Angular grippers are usually the most economical,' observes Billings. 'However, because of the sweeping action of an angular gripper, it is not always practical for some applications, and it is more difficult to design for.' To help meet this challenge, Applied Robotics makes an angular gripper that opens to 180 degrees, which means that it does not need to be lifted up and out of the way when the jaws are fully opened. With less motion, cycle times are decreased.

Another variable to consider is whether to use a two or three jaw gripper. In two jaw units, which come both in parallel and angular styles, the grasper affords two mounting spots for the fingers to hold the part. The jaws move in a simultaneous motion, opening and closing toward the central axis of the gripper body. Three jaws furnish more contact with the part to be clasped and are more accurate in centering than are two jaws.

There are many choices to grapple with when deciding on the type of gripper to use. This includes part geometry and attack angles.

'An issue that people struggle with, that they do not always initially think about, is whether they are going to grip the part internally or externally,' commented Billings.

This decision is usually made by examining the geometry of the part, its orientation, the space available, and the manufacturing treatment to be performed. External gripping is the most widely used type, where the closing force is utilized to clench the part. An internal grip makes way for unobstructed access to the outside surface of the part, which is necessary for polishing/buffing, grinding, or painting applications. The opening force of the gripper is used to hold the part.

Developing Products
New gripper products on the market include self-locking grippers so the unit remains clasped if there is a power failure. This is crucial when the consequence of dropping a part is hazardous or very costly.

There is a trend now toward the use of composites in grippers, making them lighter yet as strong as aluminum, the traditional gripper material. Composites materials are increasingly used to keep weight down or if the gripper is exposed to certain corrosives.

Another trend is the use of more electric grippers. 'There will be a time when electric grippers are the norm, but pneumatic grippers will always be around,' predicts Hessler. 'Pneumatics are just too efficient at what they do to be phased out completely.'

DePeuter Packaging and the ARPG