From Televisions to Tanks: Electronics Production with Robotics

Robotics and manufacturing electronics are a perfect fit for one another. In both military and consumer electronics, production would be next to impossible without robotics for many reasons, ranging from quality and quantity to ergonomics and economics.

Tasks
What jobs are robotics used for in the electronics industry? The short answer is ‘‘everything.’‘ These jobs run the gamut from assembling circuit boards, to installing them into chassis of electronics, to inspection and testing. 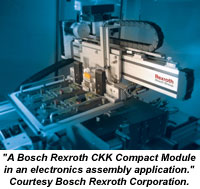 ‘‘Electronics are made and sorted in phases. Robots are used at the beginning and end of production lines,’‘ said George Martin of Bosch Rexroth Corporation, Buchanan, Michigan. ‘‘Often, the middle of the line has hard automation for circuit board ‘stuffing’. Robots are used to assemble the devices once the board is stuffed,’‘ Martin continued.

Martin went on to say that robotics do the sorting and finishing of electronics at the end of production lines, where products are packed for shipping and palletized. Martin is the Director of Product Management for Robotics and Linear Motion Products at Bosch Rexroth, a manufacturer of robotic systems for the electronics and consumer goods industries.

Computer hard drives are among electronics that would be inconceivable to produce without the use of robotics. Miniaturization, quality and quantity issues make hard drives virtually impossible to be made manually.

‘‘Adept robots can certify hard disks, load them onto test spindles and segment them. Robots can differentiate the testing of a 20 GB drive from an 80 GB drive,’‘ said Dulchinos.

‘‘Many computer disk drive applications and other precision electronics require parts to be manufactured in a Class 10 or higher cleanroom environment,’‘ says Jack Justice, a Market Segment Manager for Motoman Inc., West Carrollton, Ohio.  ‘‘Motoman builds articulated and SCARA robots for use in a Class 1 cleanroom and has an installed base of hundreds of units producing semiconductors, hard disk drives and flat panels, including manufacturing, product testing and packaging.  The cleanliness of the robot, as compared to a human worker, dramatically increases part quality in cleanroom environments, where the tiniest particle can cause component failure,’‘ Justice continues. 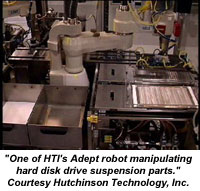 In Suspension
A vital component in hard disks is the suspension assemblies. These small and delicate parts are cantilevered springs that hold the read/write head over the disk as it is spinning. Hard-drive suspensions are 11 mm long, small enough that a 30-power microscope is needed to see features on them, and are fabricated from a stainless steel laminate. Over half of the world’s hard-drive suspensions are manufactured by Hutchinson Technology Inc., Hutchinson, Minnesota. 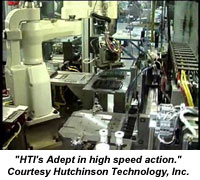 The company’s Chief Technology Officer, Scott Schaefer, elaborated on the role of robotics in manufacturing hard-drive suspensions. ‘‘Hutchinson uses robotics because the parts are so tiny and precise. Workers cannot pick up and move these parts manually, because that would throw off their tight tolerances,’‘ Schaefer said. ‘‘Before investing in robotics, we used to handle suspension assemblies manually, inspecting them with people behind microscopes.’‘

Robotics in Hutchinson’s manufacturing facility performs several tasks, including etching. However, material handling is the firm’s primary robotic application. ‘‘Hutchinson uses robotics to move parts between work stations. To change the orientation of a part, we use five- or six-axis pedestal robots to flip it over or place it on the next work station,’‘ described Schaefer. ‘‘When moving the three subcomponents that make up a hard-drive suspension, we use robotics to pick up each and place them into a fixture that moves them to the laser welder.’‘ Then, the robot moves the welded strips to another work station.

Precision and High Speed
Schaefer went further by saying ‘‘The precision and speed of our robots are so that we run them at very high speeds. Hutchinson pushes the robots to their limit.’‘ The throughput is impressive. One robotic work cell can produce over 400,000 suspensions a week, or about one per second. With over 500 robots in 50 automated cells containing six to nine robots each, they are capable of producing over 10 million suspensions a week.

The welding tool in the work station is very precise, so the robot has to be very exact in locating the part in the fixture. Clearance and tolerance are extremely tight.

Lift and Shift
Because the parts that constitute hard-drive suspensions are so small and delicate, a large and stable fixture is required to secure them during laser welding. This raised some ergonomic concerns of manually moving the fixture in and out of welders. Schaefer recollected that ergonomics were a justification for Hutchinson’s initial investment in robotics.

‘‘Fixtures had a mass of 5.5 kg, which were placed into welders manually. Operators were exposed to ergonomic risks such as carpal tunnel syndrome and sore wrists,’‘ Schaefer said. Hutchinson used their early robots to remove this risk.

Military Applications
What of the military side of electronics production? ‘‘Documentation required for the production of military electronics is typically much greater than any for consumer manufacturing. That's where PC-based controllers come into play,’‘ expressed Phil Baratti of EPSON Robots, Carson, California. ‘‘You have to document every step of the manufacturing process in real time.’‘ Baratti, who is EPSON’s Application Engineering Manger, went on to say that military electronics also require that a statistical process control on the assembly of each part that is made. ‘‘You know torques on every single screw. You know if there was a cross thread, for example,’‘ Baratti noted.

The documentation process records variables such as time, temperature, and humidity throughout production. Baratti said, ‘‘In manufacturing consumer electronics, you do not necessarily need to document these variables, so long as product is manufactured within tolerance.’‘

In the manufacture of electronics for military aircraft, there are often environmental controls that are not present when building commercial aircraft. ‘‘Often, electronics for fighter aircraft are assembled in an environment of zero humidity and zero oxygen,’‘ explained Baratti. ‘‘So there is no chance of oxidation or condensation on electronic components, the robot hermetically seals them.’‘ He said that condensation that forms in the super-cold temperatures at altitudes exceeding 15,000 meters would have a disastrous impact on the electronics of military aircraft.

Robotic Testing
Testing of product is another difference between the way civilian and military electronics are produced. While there is component testing in consumer electronics on a relatively small scale, it is not yet the norm.

Bosch’s George Martin addressed this issue. ‘‘Our robots help build electronic components for tanks and other military vehicles. Quality requirements of military electronics mean significant testing by the robot during production. The push now is to automate quality by checking 100 percent of everything.

Liability is a major concern. Martin says, ‘‘Devices such as seat belts, seal belt retractors and air bags, have a huge liability should they fail.’‘ Soon, this will be the standard for consumer electronics. 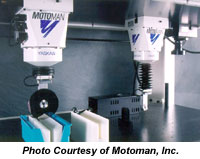 ‘‘To inspect tiny laser diodes used in fiber-optic communication systems, Agilent Technologies uses a unique Motoman robotic solution that features mini-robot modules riding on a frictionless air bearing and operating independently within the shared area of the platen surface.  The mini-robot modules pick up individual diodes and transfer them through a series of camera inspections and laser tests before placing them in one of 28 different storage trays,’‘ Motoman's Justice says. ‘‘The inspections are carried out in a Class 1000 cleanroom and the robot system is equipped with integrated vision and custom-tooling modules to verify the quality of the laser diodes.  This unique multi-head platen drive technology provides consistent positioning precision due to the absence of mechanical bearings and wear surfaces in major positioning axes,’‘ Justice continues.

Robots Meeting e-Challenges
Consumer and military production of electronics by robotics have their own special challenges that must be met. Static electricity present during assembly could render an electronic component useless. Care must be taken to ensure this does not occur. ‘‘There are several way to deal with electrostatic discharge,’‘ said Martin. ‘‘One is to blow ionized air over everything to prevent static discharge.’‘

Rapid deceleration is another possible pitfall when using robotics for electronic assembly. To avoid this, integrators must program in gentle deceleration of the robot’s arm so that this motion does not jolt sensitive electronic components.

Made at Home
Keeping production at home is one motive for end-users to invest in robotics. With the high cost of labor, robotics provide a means to stay at home and remain competitive. Another factor for Hutchinson staying in the United States is that the necessary technology and specialized equipment they need is often found only in the U.S.

‘‘Hutchinson is located in the United States because the precision and tolerances required are critical and difficult to achieve,’‘ maintains Schaefer. ‘‘We find that there are only two places in the world to make hard-drive suspensions, the U.S. and Japan. There is no economic reason to locate in Japan because their labor and tooling rates are as high as here.’‘

Schaefer pointed out that it has not been an option to locate in China with its low labor rates. ‘‘China does not have the tooling capability that we need. Hutchinson tests this every few years,’‘ said Schaefer. While China’s production facilities have gotten better, there is still no justification for the firm to relocate there. Instead, they invested in robotics as a means of remaining in the U.S. while staying profitable.

More Robotic e-Assembly
As electronics get smaller and more sophisticated, robotics will be increasingly called upon to assemble and pack them. Vision will play an integral role in this tendency. ‘‘The trend will be faster and more precise work cells, while vision will become more standardized,’‘ predicts Adept’s Dulchinos. ‘‘Rather than teaching robots where parts are, vision will be able to ‘see’ them. This will be the de-facto standard. Smaller robots will lead to smaller electronics,’‘ Dulchinos said.