From Dies to Designs, LED Light Improvements Come from Many Sources

It’s been decades since the first high brightness LED was followed by the first blue LED light. Since then, the solid state lighting technology has improved in uniformity, thermal dissipation – a critical factor – and most importantly, become exponentially cheaper.

Better Dies, Much Better Designs
“Since Lumiled came out with ultra-high brightness LEDs, we haven’t seen a big jump in performance from the die makers,” notes Matt Pinter, co-founder and head of engineering at Smart Vision Lights (Muskegon, MI). “While costs get cheaper and uniformity gets better, the benefits are really coming from the light maker and their approach to solving a customer’s problem.”

Thermal resistance is one area where LED dies have steadily improved, according to Metaphase Technologies (Bristol, PA) Operations and Engineering Manager Kevin High. Several years ago, 1W of power at the LED-solder junction could result in as much as a 15C increase in temperature. Today, that number is down to 5C thanks to larger thermal pads on the die and other improvements. 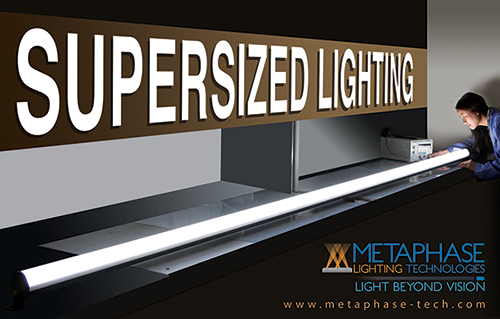 Chip Scale Packaging (CSP), with connections on the bottom of the die instead of out at the edges, may be part of the solution to reducing that thermal resistance even further, while allowing LED light makers to pack even more illuminators into the same area, according to Metaphase’s High.

Thermal resistance isn’t the only tool LED light makers are using to move heat away from the die and outside of the light, adds Metaphases’ High. “In some cases, we partner with the machine maker to mount the light on an exposed heat sink mass [e.g. metal with good thermal conduction]. In other cases, we use Vortex coolers that use compressed air as the power and output hot air and sub-zero cooled air at either end, a method that’s used in a lot of machining applications. And for the most extreme cases, we offer water cooling.”

Smart Vision Light’s Pinter agrees with the benefits of water cooling. “With forced air, you have to worry about filtering the air, gumming up the insides of the light, and other contamination from industrial plant environments, plus the cost of the compressed air, which isn’t cheap to the customer,” Pinter said. “Water coolers are compact, self-contained, and offer and incredible amount of cooling for applications that want high-output and continuous operation.”

The first choice to reduce thermal loads for any LED light maker is to strobe the light. “In most machine vision applications, duty cycles are 5% or less, up to 10%, “explains Smart Vision Light’s Pinter. “By the time you acquire the image, transfer it to processing, run the algorithms, and move the product on, usual duty cycle is 10 to 1.”

But overdriving LEDs also poses challenges – and opportunities, according to Moritex (San Jose, CA) president Jason Baechler. Moritex is one of the Asia and the world’s largest manufacturers of lighting and optics, with a primary focus on the semiconductor industry. Because of the stringent requirements for light uniformity, robustness, and uptime in the semiconductor industry, Baechler says Moritex has developed a special binning process that not only characterizes incoming LED dies by color and intensity, but also by forward current and forward voltage drops.

“We’ve found that if you want to overdrive LEDs, you have to measure the forward current and voltage drops beyond what suppliers do,” said Baechler. “Otherwise, you run the risk of burning out some die if you blast that light with a lot of power. While red is pretty stable, and green, blue, and white are okay, when you get into the infrared and ultraviolet, costs skyrocket as do variations in chip performance.”

With productivity at stake and LED light costs low compared to other automation solutions, customers are pushing LED light manufacturers to develop custom lights that meet their very specific needs. “While we have products that cover all the standard configurations, we can easily adapt them to custom configurations. In the line light area in particular, more customers want specific size, or angle of output, etc. We’re also seeing a lot of applications outside the visible range, especially in North America. We’re probably 50/50 between visible and non-visible in North America.”

Both Metaphase and Smart Vision Lights also report growing interest outside the visible spectrum, with both companies offering ‘multi-spectral’ lights. “We’ve worked cameras from Teledyne DALSA that can take multiple exposures very quickly, one in the visible and another in the infrared,” explained Jim Gardiner, Sales Engineer at Metaphase. “They need a single light source that provides a broadband for color, and also infrared – specially for food sorting applications where infrared reveals bruising below the fruit. Printed circuit board inspection is another area, along with bank note inspection and anti-counterfeiting.”

Having multiple ‘colors’ in an LED light requires a specialized driver that can turn certain segments on, while other light segments are off. “People want smarter lights, but not necessarily network lights,” said Smart Vision Lights’ Pinter. “And they still want the camera in control of the light, not the other way around. One small factor that’s making it easier for us and our Camera-to-Light line is that more cameras, especially smart cameras, now have an M12, 5-pin connector, which makes it a lot easier to connect one light to many different OEM cameras. That’s the sort of thing end users and integrators want.”

While incremental improvements in LED dies, heat sinks, light controls, and connectors may not warrant a slew of front page cover stories on control and automation magazines, these enhancements are adding up to higher throughput and productivity for customers. And at the end of the day, that may be the most a simple light can hope for.

Imaging Applications Use LEDs to Span the Spectrum