Offering simpler integration and improved operation, new motion control systems are achieving better than ever penetration in the food and beverage packaging industries.

When you think of food and beverage production, you probably immediately visualize factories filled with humming equipment working at breakneck speed to produce, dispense, bottle and package products on the scale of thousands per minute. Where the need for automation exists, applications for motion control are not far behind. 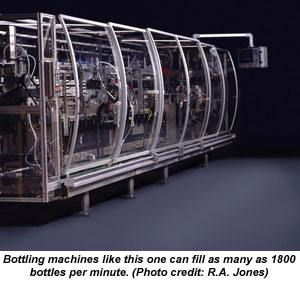 Motion control has been an option in the food/beverage packaging sector for decades, but recent improvements have made it easier to apply within the industry. “Things like the communication methods between controls have improved greatly,” says Jeff Williams, director of business and product development for packaging machine manufacturer R.A. Jones (www.rajones.com; Covington, Kentucky). He points to integration protocols such as the Serial Real-Time Communication System (SERCOS) digital interface. “The way we connect all the controllers and drives has become much easier than it used to be. It simplifies the design and construction, as well as improving the troubleshooting and diagnostic capabilities.”

Sue Dorscheid, product line manager for Danaher Motion (www.danahermotion.com; Rockford, Illinois), agrees. “Servo drives used to [operate based on] encoder feedback and analog output, a bunch of wires going back and forth. Then a lot of people went to SERCOS based systems, which used fiber-optic cable between the controller and the drive.”

The next development for connecting drives to controllers or linking multiple controllers, she says, is Ethernet. “A lot of different standards have been developed that use Ethernet hardware but different communication protocols that run over controls and drives to communicate with each other and do the types of really high-performance motion that are required in the food and beverage applications.” Examples include master/slave motion, or synchchronizing registration input and programmable limit switch output.

“The advantage to the [Ethernet] approach is that it greatly reduces the costs of wiring and labor,” says Sydney Brooks of Panasonic Electric Works Corp. of America (https://pewa.panasonic.com/; New Providence, New Jersey). “With other pulse-only type servo drives where you’re connecting between a controller and the driver using pulse trains, the wiring schemes are very complicated. It requires a lot of time to really figure out the wiring as well as the special cables that you need to make the connection between the controller and the drive.” In contrast, current products, including Panasonic’s, operate with commercial off-the-shelf Cat-5 cable.

Judicious Use of Servos
Another development that is making motion control appealing to manufacturers of food-packaging equipment is increasing levels of integration. “In the past, there used to be a logic controller for a machine and, in addition, a motion controller,” says Williams. “That adds an awful lot of complexity and cost to a machine. Integrating ladder and motion controllers really simplifies things and helps improve the cost [basis] as well.”

Because R.A. Jones supplies packaging machines to the food and beverage industry, they have a unique perspective on how users view servo and motion control technology. “The majority of the food and beverage companies today have [motion control] axes installed in their plants,” Williams says. “We have many customers who demand servo systems and would not buy a machine without them because of the benefits they [they offer].” Many, but not all. There are still users out there who would rather avoid servos, he says, concerned, perhaps, about complexity. “It may be newer plants or newer operations that just don’t have that expertise base. In that case, they would prefer more mechanical machines.”

All servos or no servos? The best solution, not surprisingly, lies somewhere in between. More is not always better, and overusing servos can be just as bad as shunning the speed and precision that the motors have to offer. “While they do have benefits in terms of flexibility, servos do come at a cost per axis,” Williams notes. “We try to use servos where they enhance the speed, flexibility or functionality [of the machine].”

Going Crackers
So just how are servos being used in the food and beverage packaging industry? In the hot spots, not surprisingly.

One challenging application in food packaging involves collating products for secondary packaging; think of those fancy cracker collections that feature several differently flavored, individually-wrapped slugs of crackers. Packaging such products requires synchronizing the incoming product, collating and grouping as many as eight types of crackers, and synchronizing the transfer of slugs to the cartoning machine, all of it at high throughput.

Enter motion control, which allows R.A. Jones to use up to 40 axes to perform the tasks above, as well as the gearing and camming motion profiles on the cartoning machine itself. “These transfer units have to react very quickly,” says Williams. “Traditional mechanical methods such as clutches and brakes are unable to run at the type of speeds we need on today’s production lines. We’ve turned to using servo technology to increase the throughput of our transfer systems. It not only gives us the speed we need on the transfers but also the flexibility for handling a number of different [products].”

Indeed, this capability for rapid changeover is one of the key advantages offered by motion control. “One of the most common areas in which we apply servos in is where we need a high degree of flexibility within a machine,” Williams says. Customers expect to use a single machine to package multiple different products, and since time is very definitely money on a manufacturing line, the ability to adjust the machine to handle a different product in the minimum possible time is crucial. “The high use of servos can allow for much a simpler and much quicker changeover on a machine," he adds. As fast as five minutes, depending on the level of complexity.

Another tough food packaging problem involves flexible packaging -- pouch machines that handle products like oatmeal, drink mixes or even soups. Here again, speed and accuracy are critical. “In these applications, we’re running up to around 4000 linear inches of film per minute,” Williams says. “We have to maintain control of the film and we have to control registration of that film to our sealing, filling and cutting systems.”

Again, motion control is the solution. Not only does it provide precision motion, but in the event of a fault such as a web wrap or web breakage, the servo system essentially acts as the braking mechanism, driving the machine to a stop as quickly as possible. The company also uses servos to eliminate drive trains, where appropriate. Removing a large portion of the transmission components reduces wear, as well as making the machine quieter.

In today’s demanding food and beverage market, motion control can offer manufacturers the edge that they need. “The servo is so infinitely variable and flexible as far as the different kinds of profiles and motion that it can run,” says Dorscheid. “Packaging machinery builders can maybe not have as much machinery in an end-user plant but the machines can do more things. Servos lend themselves to that quite nicely.”