Flexible Metrology Systems Extend Their Reach to the Shop Floor 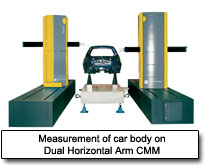 Many manufacturers supporting the automotive, aerospace and defense industries, among many others, have a busy room somewhere in the back where quality control engineers, designers, machinists and shop foreman come to see if their products match the original specifications. Custom and tool and die shops have it, too.

They take their half-formed part or discontinued mold from the floor and drop it off to find out if the part features match CAD drawings, or maybe to create a CAD drawing from an actual part. If they are lucky, in a few hours, or days they can determine what changes need to be made to the die to improve the quality of the part. In the meantime, hundreds of parts have been manufactured..

Today, pressures on manufacturing plants around the world are creating demand for new types of measurement devices (including some robotic machines) [coordinate measurement machines (CMM)] to speed up the feedback process. Once the exclusive domain of room-sized machines, new mobile measurement devices now venture out of the QC lab and onto the shop floor. These systems use new probe types to accommodate a wide range of parts, sizes and throughputs, while offering new user interfaces that make the machines easier to operate for personnel untrained in metrology.

Getting CMM Out of the Lab

‘‘Metrology departments used to be separate from production and manufacturing,’‘ said Joe Martin, vice president of sales and marketing at Sheffield Automation (Fond du Lac, WI). ‘‘They operated in a clean room and nothing was speed dependent – everything was accuracy. We’re seeing a real push to get these machines out into the manufacturing environment. It’s almost like a flexible gauge and not a CMM because of the automated feature sets, report generation capabilities and accuracies. Compared to a fixed guage, set up time is dramatically cut as well. We have one manufacturer that every time he buys a lathe, he buys a CMM to put next to it.’‘

CMM companies are taking many different approaches to portability and mobility. Romer/CimCore has departed from the standard bridge style CMM, where a touch probe or scanning probe is suspended from a pair of x/y moveable bridges located above a stage or table that holds the part. Romer’s design uses six- or seven-axis flexible arms that are manually positioned and use touch probe tooling that sits on a moveable tripod. Windows-based software programs are used for measuring the object under test with resolutions of .0002 within a four-foot measurement area – all for about half the cost of fixed CMM machine with similar volume capabilities. The extendable arm lets the 3000i system handle large parts such as the top of finished automobiles. The 4 to 12-foot measuring envelope can be extended by 2.5 times by using an optional SpaceLOK feature that provides a temporary reference point outside the original envelope and allows the operator to reposition the probe arm. By installing a GridLOK floor mounted grid system, the envelope can be extended to most any size measuring envelope while maintaining accuracy specification.

‘‘By putting a laser scanner on the end of an arm like ours, you have reverse engineering capabilities in addition to ‘real-time’ inspection, and even more flexibility,’‘ explained Romer’s National Sales Manager, Rob Martin. ‘‘Non-contact measurements are especially useful for anything pliable, such as plastic, headliners and seats. There’s also a huge market for molds sitting in people’s storage that don’t have CAD data, and with our reverse engineering capabilities we can give you that.’‘ 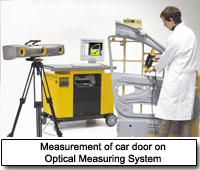 Rather than bring the laser scanner to the part on an extendable arm, Brad Robillard, an engineer with precision measurement and control manufacturer Beta Laser Mike (Dayton, OH), recently illustrated an emerging trend toward integrating material handling robots with a laser scanner system. The application involves carbide blanks that eventually become drill bits. The system uses a Motoman (West Carrollton, OH) UPJ robotic arm to pick up the blanks from a delivery chute. The robot brings the blank to a 1220 laser scanner to make 30 automated measurements before flipping the part and making a second series of measurements.

‘‘We think that moving CMM into the manufacturing process is a good, developing market. By putting the scanner on the end of the robotic arm, we can accommodate even larger parts,’‘ Robillard said. (For more information on how robotics and CMM create efficient automation solutions, be sure to explore the upcoming International Robots & Vision Show and Conference, June 3 to June 5 in Chicago, IL. More show information can be found at www.robots-vision-show.info.) 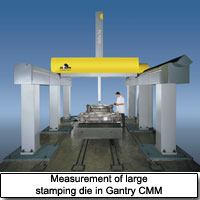 ‘‘With multiprobe CMMs you have the additional advantages of a laser scanner and vision system built into a CMM.  If you have a large component that has any number of different tolerances and features within that part, you can have a machine set up that has traditional trigger probes as well as laser scanning system and vision metrology systems. Each would give you an advantage in throughput where a simple CMM touch trigger probe machine would be much slower,’‘ Card said.

‘‘While end users have shied away from lasers and [camera-based] vision systems in the past, we’re seeing more customers interested in these tools and their capabilities.  We believe that this is a result of the growing awareness in the marketplace of this technology.’‘

Optical CMM is just one way to make a CMM more flexible. Sheffield Automation’s new Discovery line uses a standard bridge configuration, but adds hard bearings rather than air bearings, and specially constructed supports and wheels among other features to enable the system to travel anywhere on the plant floor. This system brings the high resolution associated with clean room metrology operations to the shop floor where it’s needed most.

‘‘If you’re in military and aerospace, you don’t have to worry about line speeds, but in automotive, where they want to check as many parts as they can, its beneficial to put the machine right next to the cutting or manufacturing machine -- once you’ve designed the system to withstand vibration and contamination,’‘ said Sheffield’s Martin.

According to Martin, portability is more than wheels and rugged designs. ‘‘Ease of programming is really becoming an issue. We’ve developed a single touch interface where you put a picture of the part up there and operator just points to the things features he wants measured and the machine scans it and prints out a report. Now the CMM can run with a machine operator, which reduces head count for the plant manager, reduces time, and increases throughput with less scrap.’‘

The principal barrier to use of CMMs, other than durability and user iterface, is speed. Automotive manufacturers have now begun using vision sensors mounted on robots for 100% in-line inspection of parts. The fact that robots offer repeatability of less than 0.1mm is well within tolerances required in automotive applications. Further, robots offer automated gauging capability that is an order of magnitude more accurate -- and infinitely more flexible -- than check gauges. Perceptron recently won a 2003 PACE Award for their use of vision with robots.

As current trends show, automation comes from many industries, including quality control touch probe metrology, optical inspection and even robotics for material handling. As these technologies converge, manufacturing operations will be able to continue to improve productivity with a quick return on investment while enabling new applications in reverse engineering and other design services. The end result is a financially healthy operation with less scrap, happier customers and a healthy bottom line.

New automation advances in metrology are providing manufacturers with more options to become more streamlined and ‘‘leaner.’‘ This is changing the manufacturing landscape. Quality control and inspection is migrating toward the factory floor, and new offline technology is pushing the quality envelope even further. An especially interesting trend is that production personnel and plant managers are developing new metrology skills.