Robotic gripper, actuator and end of arm tool (EOT) suppliers have created vacuum and mechanical grippers for thousands of manufacturing applications. The EOT industry has developed different metals to meet a variety of application scenarios and environments, anodizing techniques to guard exposed gripper surfaces from solder splatter and other contaminants, Venturi valves to increase vacuum pressure and actuation speeds…the list of successes goes on and on.

But like any other technology, success breeds new opportunities. Today, the robotic-gripper market is pushing its core applications outward in both directions, solving larger applications needing more power, and smaller applications requiring advanced-tactile functionality. As a result, traditional pneumatic grippers are adding a host of optional sensors for force control and position feedback, while vendors are developing new electric and servo grippers for delicate and small-assembly applications.

‘‘As we know, pneumatic grippers are the more popular grippers and will be five years from now too,’‘ explained Milton Guerry, Vice President of Sales at SCHUNK Inc. (Morrisville, North Carolina). ‘‘It’s a cost thing. It’s a simple device that is simple to operate and simple to control.’‘

Guerry is not alone in his assessment. ‘‘Price is an incredible driver now,’‘ said Beth Van Haaren, Design Engineer at Tipp City, Ohio-based Robotic Accessories. Other considerations on the side of pneumatic dominance include ongoing demand for robots and grippers with greater payload capacity. ‘‘[Robot vendors] are selling 500-kg robots for applications that used to require a crane and a robot. These applications are growing, but smaller areas are also growing. Electronics. Food. These industries will remain competitive [for different gripper designs].’‘

At the heart of pneumatic’s dominance is the ability of pneumatic grippers to produce considerably more force than electric or servo grippers within the same footprint, and maintain that force in the event of a power loss. ‘‘We’re seeing top line growth for larger assembly applications that use pneumatics,’‘ noted Dan Peretz, Director of Sales at DE-STA-CO Industries (Madison Heights, Michigan). ‘‘The issue with electric is they are either mechanically held in position or spring loaded, but never the motor holding the load itself because you would end up burning up the motor.’‘ 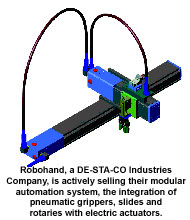 Defining the Need for Electric Grippers

So what exactly are the driving factors behind electric gripper use? When maximum force is not a criteria, according to President of Robohand Inc., a DE-STA-CO Industries Company (Monroe, Connecticut), Jim  Gobany, ‘‘Normally, a lack of shop air is a driving criteria for a customer to choose an electric gripper. Another situation is when people need to control the grip forces, position feedback or adjust forces during operation – but those specific conditions tend to be more market-driven applications, such as the need in the electronic industry, and in environments where cleanliness is an issue.’‘

CEO of PHD Inc. (Fort Wayne, Indiana), Harry Neff, sees opportunity for electric and servo grippers in two application areas: delicate and complex assembly. ‘‘One example is the manufacture of medical devices: IVs, catheters, syringes, medical testing, pill dispensing…anything medical. The medical industry is trying to control costs and improve accuracy. The other area is that for American industry to be competitive, it has to take more labor out and use automation on complex assembly tasks. 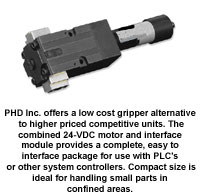 Both of these factors seem to establish a consistent need for inexpensive point-to-point electric grippers with long strokes – one that just opens and closes – and advanced grippers with force feedback, as well as position feedback. So you need a combination of force control, which is usually accomplished by amperage, and fine position control, which is usually done with an encoder on the back of the servo motor.’‘

In simplest terms, a servo gripper uses a similar motor to an electric gripper, but adds sensors and electronics that make the system far more programmable, while providing electrical feedback that can be used to change the motor’s operation. While an electric gripper might be programmable to apply 20 lbs of force on one occasion, and 10 lbs on another, a servo gripper could apply 20 lbs of force for three inches of closure, and drop that to 10 lbs for the final inch when the object is delicate, such as an electronic component or test tube.

This ability to control stroke, force, velocity, acceleration and deceleration is the real driver behind nascent development of servo grippers. ‘‘Sure sometimes air is not available and that’s a driving force to go to other means of actuation,’‘ said Guerry, ‘‘but the biggest driving factor with the cost difference is control.’‘

As expected, the increased cost factor of servo grippers is pushing these devices towards specialized applications, where the cost-benefit ratio is firmly on the side of the manufacturer.

‘‘Let’s say you have an application that can’t be palletized,’‘ said William Townsend, President and CEO of Barrett Technology Inc. (Cambridge, Massachusetts). ‘‘The product differs in orientation, or different parts coming down the same line. You might be looking at three different work cells. The robot is only $30,000, but a work cell is $100,000; you’re looking at $300,000 for three, while a single work cell with a dexterous gripper could do the job with one work cell. On top of that, a three-work cell solution is not always possible because of the footprint. This is the market we’re going after right now; we’ve found that there is no middle solution so far.’‘

Barrett, which has sold its jointed-finger, multiple-servo based gripper to the military, hazardous, and energy applications around the world, is due to release an industrialized version soon. 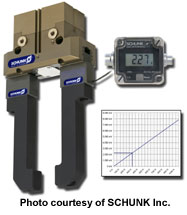 Today, SCHUNK’s Guerry estimates that approximately five to eight percent of robotic grippers call for some kind of advanced functionality. ‘‘New grippers are opening up new application areas,’‘ Guerry said. ‘‘As new functionalities gain acceptance, they are definitely opening up new applications. Things we’ve done in the medical field would not have been trusted to automation a few years ago. We understand automation. It’s a lights out, and that’s an uneasy feeling. You have to have these kinds of controls to gain the customer’s confidence that the solution will work.’‘

Editor’s Note:  If you are interested in this article, then you will also be interested in the Handbook of Industrial Robotics edited by Shimon Y. Nof with a forward by Isaac Asimov. This edition also includes a CD-ROM. For a more detailed description or to order, visit the Robotics Online Bookstore.