We live in a networked world. Our phones are networked, the GPS units in our cars are networked, even some of our vending machines are networked. Little surprise, then, that Ethernet has penetrated the industrial market to run machines and production/packaging lines, linking those operational networks to the plant networks, and providing access from anywhere in the world.

A look at the numbers provides confirmation that industrial Ethernet is past the early adopter stage. The market penetration for Ethernet-based devices and I/O should rise to more than 3 million nodes in 2012, up from 1 million in 2007, says a new study from the ARC Advisory Group (Dedham, Massachusetts). The forecast calls for a market growth of 27.5% over the next five years.

Glenn Erickson, president of system integrator Expert Automation Design Inc. (Seminole, Florida), started out using Ethernet for data exchange, for example, to link the human-machine interface (HMI) to the programmable logic controller (PLC), or allow the maintenance to access fault histories. Today, he’s quoting systems that leverage fiber-optic Ethernet to support distributed control architectures, linking panels scattered along a long production line. “It was actually cheaper to do it that way than to try to have one large central cabinet and run all the wires for all of the sensors, drivers, et cetera,” says Erickson. “Fiber Ethernet is noise immune. It prevents ground loops and crosstalk between the cabinets, and it's blazingly fast.”

Even in the data communication applications, he sees tremendous benefits, chief among them remote access. Ethernet allows an integrator like Erickson to dial into his machines over a virtual private network to download parameters and recipes, monitor operations and troubleshoot the system from home, office, hotel room?or anywhere else. After chasing an intermittent fault for four months at one plant, for example, Erickson finally found the problem just as his flight was called in an airport departure lounge. “I was holding my laptop in my hand in the jetway, reloading the software in a system that had gone bad while the stewardess was tapping her foot for me to board. I'm on battery, on a wireless connection while I’m doing this, and the technology is only getting better.”

Deterministic and secure
Early concerns about Ethernet centered around the lack of determinism of packet-based protocols, which handle data packets on a first come, first served fashion. That’s not an issue for an office network sending files to the printer, but it can be problematic, or even dangerous, on a plant floor. With proper network design and the speed of today’s Ethernet systems, however, determinism is no longer an issue, say integrators.

“When someone tells you that Ethernet is not deterministic, I think that you really need to say, okay, how deterministic do you want your network to be?” comments Melvin Foo, principal engineer at system integrator Kazio Networks (Leesport, Pennsylvania). “Ethernet is very, very fast and has intelligent traffic control mechanisms. If implemented correctly, it's really deterministic for your application.” Higher speed networks tend to be more susceptible to noise, he acknowledges, but suggests that proper cabling and installation techniques can compensate for that.

It’s also a question of how you design your network, Erickson points out. If the plant network with its office or data-gathering network is physically separate from the machine network and the two only communicate via an intelligent router, the potential for data collisions drops dramatically. The machines conduct their operations independently, unless queried for information by the plant system. The architecture avoids problems like large print jobs taking precedence over machine commands.

The separation of networks also provides security benefits. Access is limited from the beginning and policed by the router. To allow a user like Erickson to connect, the IT staff sets up a virtual private network (VPN) with a mask that allows access only to specific addresses (e.g. a given machine or device). The VPN can’t access the plant network or the office network, just the designated devices. “Once the VPN is set up, it's a tunnel, and it has no interest in anything outside of that tunnel,” Erickson says. “If they set the mask up to very small parameters, the only thing I'm ever going to see is my machine.” 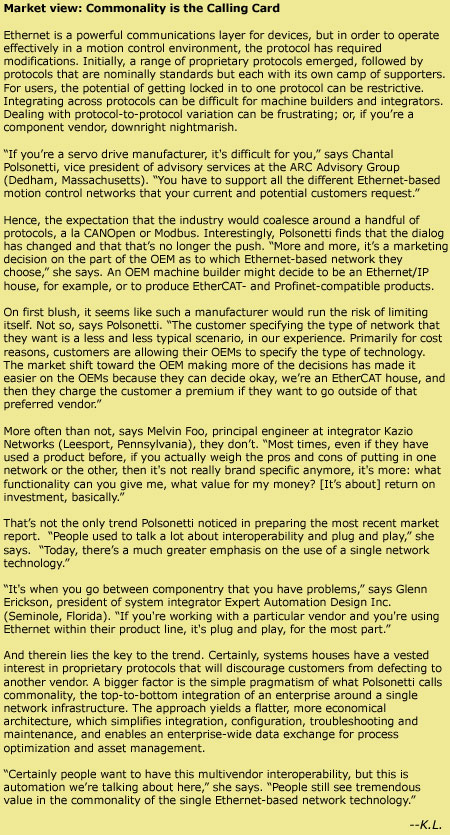 In addition to a sound architecture, companies need to follow best practices in security, like using strong encryption, changing passwords regularly, blocking access for employees who leave, and so on. For the truly squeamish, there’s always the tried and true method of unplugging the cable unless the system needs to be accessed.

That’s not necessary and not optimal, though, says Foo. “Ethernet has come to a point where you really don't need to start unplugging devices because the technology has improved.” Today’s smart routers can detect incursion attempts and block future contacts, for example. In Foo’s opinion, it’s not just about the network, it’s about the implementation. “You can put 10 firewalls up there, but the security problem could come from within. You really want to start from a policy standpoint, not from a component standpoint.”

Network matters
The utility of Ethernet is that it is a communications layer, and ultimately the success of that communications layer is rooted in the effectiveness of the network and network management. Whether it is a retrofit or a greenfield build, the backbone must have a foundation of quality cabling, routers, and switches, proper architecture and installation best practices. “You can have the best control application out there,” says Foo, “but if your backbone infrastructure is not good or your topology isn’t good, then you're back to square one.”

Staff needs to ensure the network remains up to date, but they also need to keep themselves current on programming and technology, not only understanding firewall technology, for example, but how to effectively set up a VPN for access. There may be well over a dozen Ethernet protocols out there, but if the network and staffers are in good shape, the results will probably be good no matter which flavor of Ethernet is used, Foo says.

The benefits of industrial Ethernet have become apparent and adoption is spreading throughout the motion control and automation communications. “I try to use Ethernet in everything I do simply because even though I may not be using it to its fullest capacity, it means I can expand,” says Erickson. He still runs across reluctant clients occasionally, but it generally just takes a few discussions to win them over. “Once they see the benefits, they're sold, absolutely sold.”

The Lenze Smart Motor: a Single Motor for Many Applications