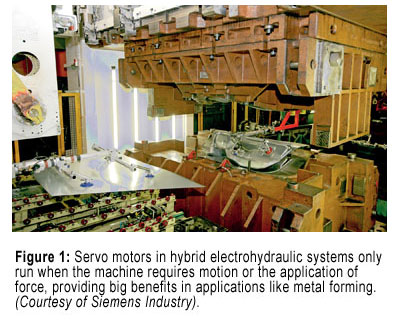 Motion control components have come a long way since the early days they were only manufactured in fractional-horsepower scales. Today, kilowatt servomotors power a range of systems including dockside cranes, printing lines, and stage equipment. With all of the advances, however, servomotors still cannot address all applications. In some cases, hydraulic actuators can better supply motive power. The problem is that hydraulics present issues like contamination and inefficiency. Electrohydraulic actuators provide an alternative that might just deliver the best of both worlds for a range of materials processing needs (see figure 1). Let’s take a closer look.

In a conventional hydraulic actuator, a pump run by a fixed-speed motor transfers a non-compressible hydraulic fluid such as oil from a reservoir into the hydraulic cylinder that generates the motion. Two-cylinder designs introduce a force multiplication Fm=P Aoutput/Ainput  that scales applied pressure P by the ratio of the cross-sectional areas of the cylinders Aoutput/Ainput — the wider the output cylinder, the greater Fm.  The tradeoff is that distance of travel scales inversely as the ratio. In other words, a greater displacement of the plunger/load in a smaller-diameter input cylinder converts to a smaller displacement but more force applied to the load of a larger diameter cylinder.

Pure hydraulics use a fixed-speed pump running continuously to maintain the pressure of the hydraulic fluid, and a proportional valve to release the fluid to actually control motion. They’re good solutions for applications like metal presses that present high shock loads that would destroy a pure electromechanical system. They’re also good for cases requiring 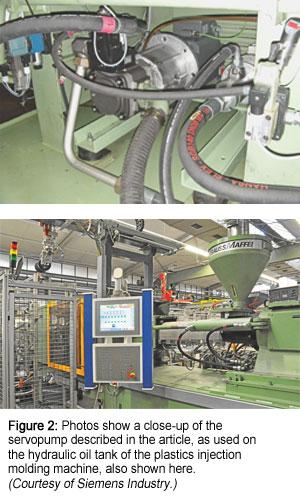 such high forces that a direct electrical solution either wouldn’t be cost effective or wouldn’t be practical. The problem is that conventional hydraulic systems squander energy—the motor runs whether the actuator is moving or not. The approach is also imprecise.

Hybrid systems
Electrohydraulic actuators combine the benefits of hydraulics with the precision, energy savings, and flexibility of motion control. Electrohydraulic actuators substitute servo motors for the fixed-speed motor/valve combination. To generate motion, a servo-motor-driven pump forces the hydraulic fluid into the cylinder. Unlike conventional hydraulics, the motor runs only when it is generating motion. That can make a big difference in low-duty-cycle applications like injection molding that only require the system to move and/or apply pressure for a matter of seconds. “You need the pressure in the hydraulic system only to close and open the form or the mold,” says Mathias Radziwill, industry consultant for the plastics industry, motion control group for Siemens Industry (Norcross, Georgia). “After that, you don't need any pressure on your system so the motor can stop.” Here, he says, an electrohydraulic actuator can provide big benefits. “We’ve calculated an energy savings of up to 60%.”

A typical system features a loader reservoir and pump mounted on top of the hydraulic actuator. The sophistication of motion control gives finer control to electrohydraulic actuators. The approach also allows the user the smaller reservoir for the hydraulic oil. “By making hybrid systems, you're able to get a more accuracy but you still get the high force density and impact load capability of hydraulics,” says Michael Szesterniak, industry market manager with Parker Hannifin Corp. Electromechanical Automation (Irwin, Pennsylvania). The packages tend to be somewhat larger than a conventional hydraulic cylinder but smaller than a purely electromechanical solution. The trade-off is that the system becomes more precise and consistent. By leveraging feedback from the motor encoder or a force sensor on the front of the actuator, designs can deliver high precision and good repeatability. They also deliver the flexibility of electromechanical shafting for switch on-the-fly type operations.

Another advantage of the hybrid approach is that it can compensate for inconsistencies and performance. Hydraulic cylinders tend to leak fluid around seals. Over time, this can alter the response. The enhanced control delivered by electrohydraulic actuators can easily compensate for this effect, making it transparent to users.

Injection molding specialist Häfner & Krullmann GmbH retrofit four of its molding machines with hydraulic pumps driven by synchronous motors (see figure 2). The change allowed the company to use a fuel-efficient hydraulic oil. Because the solution generated less heat than a fixed-speed version, they could also run at lower temperature, saving money on cooling.

In a move to cut plastic fabrication costs in their vacuum manufacturing operation, BSH Bosch und Siemens Hausgeräte GmbH ran a comparison between conventional and hybrid systems. Retrofitting a hydraulic injection molding machine with an electrohydraulic actuator cut power usage from 15 kW to 6 kW over a span of two weeks. The elimination of an oil cooler providers additional savings. Over an annual 6000 hours of operation, this performance would save 54,000 kWh, for an annual savings of roughly $8000.

The good, the bad, the ugly
The hybrid approach is useful, although not universally perfect. Latency can be a problem. An important design consideration for these systems is to place the servomotor as close to the cylinders possible, which optimizes speed.

The controls aspects of electrohydraulic actuators tend to be somewhat more complex than standard hydraulics, which can even be operated manually. The degree of control complexity depends on the system. For one or two axes of electrohydraulic motion, the machine PLC can typically manage the task. A higher axis count system might need a dedicated motion controller to get the job done.

The capital outlay is higher than for regular hydraulic systems but the reduced cost of operations, particularly in regions where energy is more expensive, can deliver rapid return on investment. "If you look at the energy savings, in Germany you will have your investment back in between one and one and a half years,” says Raziwill.

As is generally the case, electrohydraulic actuators are not a universal solution but provide big benefits for the right fit. “You can use them in absolutely application where those higher forces are needed that electromechanical systems can't solve quite yet,” says Szesterniak.