By dispensing with the need for a gearbox, high-pole-count direct-drive motors provide robust, accurate, high-torque motion for demanding applications. 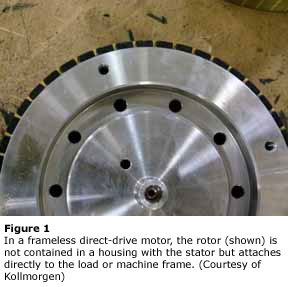 When it comes to motion, the most common approach is to start with a high-rpm, low torque motor and use a gearbox to reduce speed, which increases torque by the gear ratio. The challenge arises when the standard approach of gearing down doesn't provide sufficient performance.  Precision machining, for example, might require ultra-smooth motion. Elsewhere, as with wind turbines or press feeds, reliability trumps all. In such cases, the best solution may not involve a gearbox at all. The best solution may be a direct-drive motor.

Gearboxes present a compact way to adjust the speed or torque applied to the load, but they are not always the ideal solution. They suffer from backlash, introducing slop into the motion. For some applications, the amount of lost motion introduced by backlash is large enough to present a problem. In other cases, preloaded, or so-called zero backlash gearboxes that minimize the effect may provide a good solution. In areas like semiconductor manufacturing, however, even a miniscule amount of backlash is unacceptable. In such instances, direct-drive motors may offer a better alternative.

Also known as torque motors or torquers, direct-drive motors couple directly to the load, eliminating the need for a gearbox. The approach is nothing new - they’ve been in use for decades, but mostly in the form of frameless designs in which the rotor and stator are supplied as two separate parts that are integrated directly with elements of the system (see figure 1). Integration of a frameless direct-drive motor is non-trivial, however. The components need to be attached, aligned axially, and mounted with feedback device. More recently, manufacturers have developed direct drive motors designed for easy integration.

"Frameless direct drive motors take a lot of work to design it in," says Jeff Arnold, Product Specialist at Kollmorgen (Santa Barbara, California). "They have limited applications - the people who use them really, really, really need the performance. There are cases in which you just can't tolerate backlash, so even back when direct drive motors were really difficult, some people used them anyway.”

He cites an ironic example of a precision gear manufacturer who turned to the direct-approach because including a gearbox in the system degraded accuracy of their product. 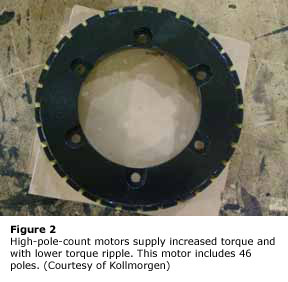 The direct drive approach not only improves motion, it can also decrease maintenance requirements and increase availability. Arnold points to a press feed machine that exposed its gearbox to such a punishing start-stop motion that it resulted in early failure. "The regular maintenance for this machine was to replace a gearbox every year because the company knew that if they didn't replace it, it was going to break," he says. The direct approach offered an alternative. By cutting out the gearbox, the OEM was able to eliminate points of failure and minimize downtime. “[Direct drive] substantially reduces the part count," says Arnold. "The old design had a motor gearbox, a belt and pulley, and all these brackets that held it together. Now, the machine is much simpler to build. They ended up with a more reliable design that had fewer things to break."

Direct-drive motors tend to use very high numbers of poles. Standard off-the-shelf motors typically feature two to four poles, although versions featuring as many as 10 poles are available. In contrast, some direct-drive motors can feature 46 poles or more (see figure 2).

The benefits of high-pole-count designs vary depending on who you ask. Increasing the number of poles enhances torque density, which can be important for applications like wind turbines. The approach can also reduce cogging, an important attribute for precision-machining applications. "The higher the pole count, the lower the torque ripple you're going to have on the motor, which is going to lead to smoother performance," says Brian Deal, Packaging Segment Manager at Schneider Electric (Schaumburg, Illinois). "One of the main reasons you go to a higher pole count motor is to minimize that torque ripple and to generate higher torque.”

High-pole count alone is no guarantee of success in direct drive motors, however. "In many of those applications, the torque ripple and the cogging are still too high," says President Jim Hendershot of MotorSolver LLC (Venice, Florida). “You have to be very careful with the geometry using fractional rotor pole to stator teeth ratios and skew the stator, or shape the pole faces of the magnets to get the cogging down low enough. It's not easy to get a cogless motor."

The two big trade-offs for the approach are speed and cost. Motor speed is directly proportional to the commutation frequency but inversely proportional to the number of poles. The more poles, the slower the motor will go. Increasing commutation frequency can compensate, but the electronics can only go so fast before power dissipation becomes a problem, typically around 400 Hz.

Depending on the voltage, high-pole-count motors can run several thousand rpm but the losses in the transistors will be significant. High-pole-count brushless motors are used at low speeds for direct drive applications requiring zero motion backlash. To reduce transistor losses, assuming the supply voltage is below 210 VAC, designers can use paralleled field effect transistors to commutate the motor and generate good sine currents. Higher voltages require the use of insulated gate transistors (IGBTs), which cannot be easily paralleled. That limits your commutation frequency to 300 to 400 Hz.

High-pole-count motors present other trade-offs, of course. More poles mean more magnets, which raises price, an issue exacerbated by the current skyrocketing cost of magnets. In the case of direct-drive motors, reduced part count and maintenance, coupled with increased mean time to failure, introduce cost savings that may balance the price bump, however.

Interestingly, the biggest challenge to working with high-pole-count/direct-drive motors is not machining parts or tuning servos, it's planning ahead. "You really have to design your machine to accept the motor," Arnold says. "It's not like taking your motor gearbox off and throwing a direct-drive motor on.”

In the end, it always comes back to trade-offs. If the application demands ultra-high torque density coupled with zero backlash, or if it needs ultra-smooth, accurate motion, a high-pole count direct drive motor may be the right solution for the job.

MCA Board of Directors