Flexibility is one of the primary benefits electronic shafting offers over traditional mechanical systems. Instead of adjusting motion by shutting down the machine and swapping out cams over the course of hours or even days, operators can switch over by simply choosing a new recipe in the HMI. For many decades, though, typical servo motors directly linked to the load could not provide enough performance for high-torque applications, forcing machine builders to reintroduce mechanical components into the system in the form of gearboxes. The problem is that adding a gearbox also introduces compliance, potentially compromising performance. Today, designers who can’t make that trade-off have the option of jettisoning their gearboxes for direct-drive motors that can deliver more than 3400 Nm for a wide range of precision-motion applications.

Although gearmotors offer a well-established, economical path to increase the muscle delivered by a motion system, the gearboxes and the couplings they require are mechanical elements that can introduce problems of their own. Backlash and hysteresis can increase positioning errors, for example. “The best performing planetary gearbox might have a backlash of 1 arcmin, and as you run your machine over time, that all just gets worse," says Jeff Arnold, Product Specialist at Kollmorgen (Radford, Virginia). Press-feed machines, for example, perform high-speed, high-repetition-rate motion that subjects gearboxes to a significant amount of wear. That makes a direct-drive motor a better solution. "Direct-drive motors eliminate that backlash—they can position to a repeatability of better than 1 arcsec and that accuracy does not degrade over time,” he says. Gearboxes also add points of failure to the system, not to mention size, weight, and cost. Still, for a long time, they were the best way for engineers to get the performance they needed until increasingly sophisticated direct-drive designs gave them an alternative.

As the name suggests, direct-drive servomotors have no mechanical transmission between motor and load—no cams, no belts and pulleys, no clutches, nothing. They are available in rotary and linear configurations. For a long time, common wisdom held that direct-drive motors had their place, but not for applications requiring high torque. That has changed, says Arnold, who points to a direct-drive motor capable of generating as much as 50 Nm continuous torque and 150 Nm peak, enough to rapidly and precisely position a 4-lb-diameter, 250-lb disk.

One way to increase torque is to design the magnetic field to maximize the flux density through the motor winding. Another is to optimize the winding pattern to maximize the density of copper. These two design parameters will yield the maximum torque per unit volume of the motor. Typical parameters for linear motors are magnet strength and dimension. A larger linear direct drive motor might have tracks that are 127 mm tall and produce a peak force of 1000 lbs.

In the case of direct-drive rotary motors, designers use very high pole counts to increase torque—up to 58 on a single motor. Adding a high number of magnetic poles to each winding of a permanent-magnet synchronous motor significantly increases the amount of force generated. 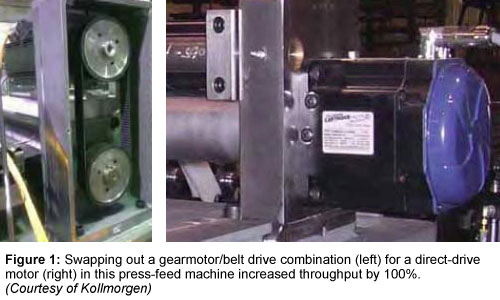 Direct benefits
Direct-drive motors provide a new way to think about inertia matching. There is a general rule of thumb that the ratio of reflected load to motor inertia shouldn't be much more than 5:1 and definitely not above 10:1. The culprit is backlash in the gearbox, as well as wind-up in the motor shaft. If the motor is connected to a large load and making small movements, it may not even properly register its motion. Meanwhile, conditions are very different for large movements. The greater the inertia mismatch, the greater the disparity between the two. Past a certain point, a single control loop cannot accommodate both and remain stable.

Using direct drives eliminates backlash, which simplifies the control development and dramatically increases the capabilities of the device. “I'm aware of direct-drive applications where we have inertia ratios motor to load of 11,000:1," says Arnold. “When you rigidly couple the load you don't have to concern yourself with inertia mismatch.”

Frameless designs also free designers from the tyranny of inertia matching. “If you truly have a direct drive and your motor is mounted to the load, inertia mismatch is not relevant," says Joseph Profeta, Director of Product Management and Control Systems, Aerotech Inc.

There are always trade-offs, of course. Increasing the number of magnets also increases the size of the motors, which can be a problem for space-constrained applications, or those requiring a certain form factor. Arnold uses the analogy of hot dogs and pancakes. A conventional low-pole-count motor tends to be long and thin while its high-torque direct-drive counterpart is both shorter and larger in diameter.

Cost also comes into play, although not as you might expect. As anyone who's been following the motor industry over the past several years knows, the cost of high-performance permanent magnets has sky rocketed. Building a motor with many-fold more poles requires a lot of material, which adds a cost premium. That needs to be considered within the larger context of the application, however. By eliminating the need for components like gearboxes, belts, and pulleys, direct-drive systems cut costs. "If you compare a direct-drive motor to a motor gearbox, the direct-drive motor carried about a 20% premium over the motor gearbox combination," says Arnold, talking about the press-feed machine. "With the motor gearbox, they had to have belts and pulleys and this big bracket structure to hold it all together. The direct-drive motor is just bolted onto the machine very simply and engaged directly to the load.” Add to that an integration time of minutes versus hours, and the cost/value proposition starts looking quite a bit better.

Direct-drive motors open up other, more subtle avenues to ROI (see figure 1). The mechanical aspects of gears, including friction and meshing, impose a limit on how quickly they can start and stop without binding. Arnold points to a packaging-industry customer that ran into trouble when they tried to speed up their machine, which packages reams of paper. "They tried to increase the throughput and they started getting interference [in the gearing] on one critical axis but they couldn’t do anything about it," Arnold says. "Then they took out the mechanical transmission and replaced that particular axis with a direct-drive motor. That eliminated the slop of the gears and they were able to get 20% higher throughput.” 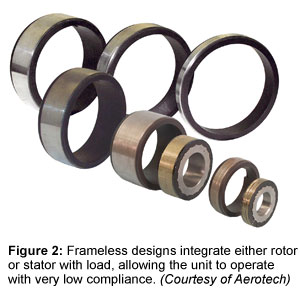 Choosing a direct-drive solution can also reduce scheduled and unscheduled downtime. Gearboxes need to be lubricated. Belts and pulleys typically stretch over time and require regular adjustment, especially in demanding applications like press-feed machines. In the worst-case scenario, they can even break. Given the high cost of downtime, it doesn't take a very long failure to provide return on investment.

Inside direct-drive motors
Developing a direct-drive motor is not as simple as buying a standard servomotor and connecting it directly to the load. Overly compliant coupling, or even a too thin shaft that is vulnerable to torsional windup, can compromise stability. The shaft of a direct-drive motor needs to be stiff enough to minimize compliance as much as possible. An alternative is to go with a frameless design that integrates either rotor or stator with the load, eliminating compliance (see figure 2). “This gives you a much higher performance system in terms of ability to have high accelerations and reversals in the movement," says Profeta.

liminating couplings from the system does enhance performance. Of course, couplings have multiple purposes. Some are designed to act as failsafes, shearing off to protect the motor from an excessively high load. A direct-drive motor has to provide that same margin of safety electronically with the addition of a control loop that interrupts function of the drive current when it exceeds a certain threshold.

It all comes down to choosing the right fit for your application. In addition to printing and press-feed machines, the units are useful for high-speed, precision applications like machine-tool spindles, semiconductor fabrication and metrology equipment, medical device fabrication, and test and measurement devices that need smooth velocity and accurate positioning.

Still, there are no specific guidelines for when to use a direct-drive motor. Arnold’s advice is to run through the list of benefits and see whether any of them apply. If yes, direct drive is the way to go. If not, maybe a more conventional solution is better. "I try to use that value proposition as a benchmark," says Arnold. "If there's nothing on that list that you can benefit from then you’ve probably got a good solution—there's no reason to consider the technology.” But if your application needs high accuracy, high-speed, and high torque, you should give serious consideration to a direct-drive solution.

Motion Trends to Watch in 2016