Couplings can reduce downtime and improve machine reliability by absorbing misalignments to protect components like bearings and gearboxes from premature failure. Part one of this article will review the basic types of couplings and their characteristics. In part two will focus on the trade-offs involved and how to choose the best coupling for your application.

Motors may provide the muscle but it takes couplings to transfer motion from the rotating shaft to other parts of the machine. At first blush, the task seems easy enough: Use a rigid metal collar to connect the motor shaft to the other component and tighten it within an inch of its life. Theoretically, that's a sound approach. In the real world, however, axial (rotational), parallel (shear), and angular (bending) misalignments exist between the shaft and the components it's connected to. Left uncompensated, these misalignments can compromise performance and increase wear, speeding failure and raising maintenance costs. Properly specified, a coupling can accommodate the inevitable misalignment, saving machine builders and end users time and money.

Aligning two shafts to within sub-millimeter tolerances is difficult enough, but that's just the beginning. Real-world systems suffer constant and sometimes extreme temperature swings, which cause thermal-expansion mismatches. A machine might be perfectly aligned when it's built, but by the time it has been shipped, rebuilt, and started up, a slew of tiny misalignments appear. The factory floor may settle over time, or the differential stresses in the base may introduce microscopic twisting. Other factors like retooling, machine damage, and shock and vibration, not to mention day-to-day wear, introduce distortions that can vary over the course of years or even a single day. For a machine to perform reliably over its lifetime, it needs couplings that can maintain power transfer while accommodating misalignments to a degree that varies from application to application.

The degree and type of alignment is not all that varies, of course. An unspool axis for a printing machine, for example, operates with significantly different torque and speed than the axis that applies the labels in a bottling machine. Consider all of the different potential variations that come in to play in a motion system and the task of coupling doesn't seem so simple anymore.

Fortunately, a wide range of coupling types exist, providing a variety of performance characteristics. By starting with the right type of coupling and carefully selecting its parameters, engineers can design a reliable system that provides exactly the accuracy, repeatability, and lifetime the application requires.

“Certain types of couplings offer better misalignment capabilities, better torque capabilities, and more accuracy, which is directly related to torsional stiffness," says Bill Hewitson, Vice President of Operations at Ruland Manufacturing Co., Inc. (Marlborough,  Massachusetts). "Some have higher or lower bearing loads, which affects the motors and the components they're connected to, or they’re heavier and have more inertia because they're made out of stainless steel to develop more torque capabilities. Some have electrical isolation capabilities. There's really a vast range of characteristics in motion control couplings that that create little special subsections." 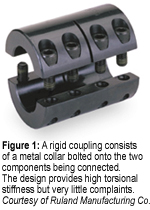 Rigid Couplings
The primary task of a coupling is to transfer power. On the face of it, an ultra-stiff coupling that provides a one-to-one correlation between the motion of the motor shaft and the motion of an actuator, for example, would seem to be the ideal choice. For precision manufacturing applications such as semiconductor fabrication or medical device production, that is, indeed, the case. In the case of machines with high cyclical loading, high-stiffness couplings provide a means to smooth out that motion.

Rigid couplings consist of metal collars bolted onto the two shafts being connected (see figure 1). The style couples elements together with the highest possible torsional stiffness. On the upside, rigid couplings transfer torque with a great deal of accuracy, minimizing settling time. On the downside, that very rigidity makes these components almost incapable of accommodating any misalignment. Because high-speed operation generates heat that causes thermal-expansion-induced distortions, rigid couplings cannot be used for these applications. Tensile strength presents another challenge. Even the strongest material has a point of failure. In a highly dynamic situation such as one involving rapid and repeated reversals of a high-torque load, the continued mechanical stress may make the coupling material brittle enough to fail. 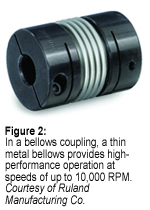 The hydroforming techniques used to produce steel bellows can yield wall thicknesses as great as 0.4 mm, as well as multiple-ply designs. As a result, steel bellows couplings can accommodate the highest possible torque for their diameter. To provide even better performance, designers turn to molded nickel bellows, with walls as thin as 50 um. Nickel bellows provide high-accuracy performance for delicate instrumentation, but their thin walls can tolerate significantly less torque.

Bellows couplings can accommodate angular misalignment of 1 to 2 deg but only 0.01 to 0.20” of parallel misalignment. Exceeding these numbers can cause failure within a matter of minutes. 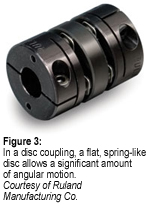 Disc Couplings
Disc couplings consist of rigid hubs separated by a flat, spring-like disc that allows the hubs to move angularly (see figure 3). The disc coupling provides a very high degree of torsional stiffness which allows it to transmit torque very accurately. The design can adjust for as much as 3 deg of angular misalignment. The single-disc version is too constrained to manage even a small amount of parallel misalignment, but adding a second disc introduces additional degrees of freedom that allow double-disc couplings to tolerate parallel misalignment quite well. 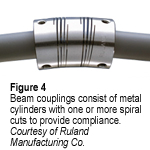 Beam Couplings
At the far end of the torsional-stiffness spectrum lies the beam coupling. A beam coupling consists of a cylindrical piece of metal, usually aluminum or steel, with one or more spiral cuts surrounded by solid metal (the beams; see figure 4). The couplings can be classed as either single- or multibeam designs; a multibeam design consists of one or more spiral cuts at more than one spatial location along the cylinder of metal. Essentially a large mechanical spring, a beam coupling can compensate for large amounts of axial misalignment and angular misalignment. Single-beam couplings, especially with only a single spiral cut, are not designed to compensate for any appreciable amount of parallel misalignment, but multibeam designs can do so relatively easily.

Not surprisingly, beam couplings suffer from significant amounts of wind up. As a result, they're better for low-torque applications and light loads. The low torsional stiffness increases settling times, making them a poor choice for high-speed, high-precision applications.

Jaw Couplings
The jaw coupling features two opposing hubs, each of which has two or more arms, or jaws, around the rim (see figure 5). Hubs are assembled so that the jaws interlace, separated by a gear-like plastic device known as a spider. Spider material, typically polyurethane, is designed to fail before the metal of the jaws. Because the jaws interlace, even after the spider fails, the coupling will still transmit power (to a point), whether to drive motion or to keep components 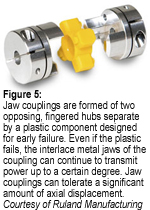 static via holding torque. The drawback is that failure of the spider typically results in a catastrophic damage to the jaws.

Jaw couplings excel at absorbing axial displacement. They can operate at very high speeds. The drawbacks are that they can only tolerate 0.5 deg or so of angular misalignment and almost no parallel misalignment. Because the plastic spider can deform relatively easily, the basic jaw coupling provides only limited accuracy in torque transmission. By curving the jaws and making a careful choice of spider material, however, manufacturers can preload the coupling to achieve zero-backlash performance. 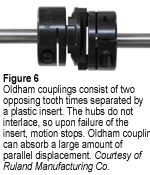 Oldham couplings
Like the jaw coupling, the Oldham coupling consists of two opposing toothed hubs separated by a plastic member, but there the similarities end. The tenons that project from the hubs only interlace with the plastic insert, not with each other (see figure 6). As a result, if the plastic insert fails as a result of excess torque or stress, the coupling will cease to transmit power. This can be highly useful in a machine-safety application, guaranteeing that if conditions trigger coupling failure, motion stops. Because the tenons of the hub do not touch each other, resuming operations after correction of the fault condition just requires installing another plastic insert. The hubs themselves are fine.

One of the chief benefits of the Oldham coupling is that it can accommodate a significant amount of parallel misalignment, as well as axial misalignment. It's a good choice for systems that undergo large amounts of thermal expansion and contraction over the course of a day. It also provides electrical isolation, courtesy of the dielectric disc. The drawbacks are that it can operate only at limited speeds and cannot tolerate more than a minimal amount of angular misalignment.

If there's one truism engineering it is that there is no one right solution. The range of coupling types available provides engineers with a number of degrees of freedom so that they can select the best component to accommodate the load, torque, misalignments, and speed of their application. All too often, however, designers fail to give sufficient time and attention to coupling design, instead leaving it until the last minute. “People spend a great deal of time specifying motors, bearings, ballscrews, linkages, things of that nature," says Bob Mainz, manager of sales and marketing, Zero-Max Inc. “A coupling shouldn't have any less need of design or time considerations, but it is often overlooked and yet it's an item that can make or break how your machine performs.”

Don't make that mistake. In part two of this article, we’ll discuss trade-offs and pitfalls in coupling designs, giving tips about the best way to achieve optimal performance for your application. 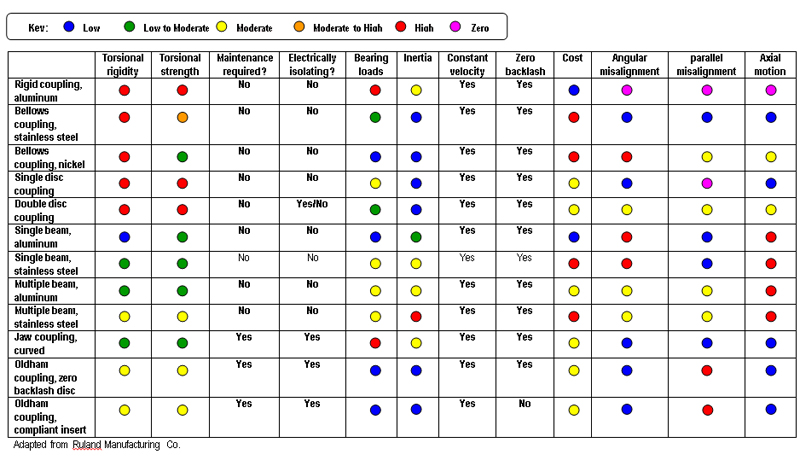