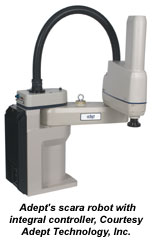 Without motion control, robotic work cells would not be able to perform their assigned tasks when and where they are needed. As robots have gotten more flexible, it has been necessary for controllers to keep up with them. However, not only have controllers kept up with the capability of robots, they have become powerful enough to mange other equipment in the work cell. This equipment includes encoders and motors, among others.

‘‘Architecture has expanded to make motion controllers flexible enough to control other mechanisms, not just robots,’‘ says Brian Carlisle. ‘‘The controller has become a general-purpose motion controller with machine vision.’‘ Carlisle is a Cofounder and the President of Precise Automation, LLC, Los Altos, California, an automation engineering company.

Which applications are more challenging to adapt motion control into? ‘‘The most difficult type of motion control is an application that requires precise synchronization between the robot and the motion device,’‘ said Keith Bailey, Director of Product Marketing at Adept Technology, Inc., Livermore, California.

Dispensing applications are what Bailey had in mind when he spoke of the challenge of synchronizing robots, auxiliary equipment and motion controllers. The example Bailey gives is that of a servomotor that lays down a bead of sealant as that motor is being manipulated by the robot.

‘‘Robots need to control auxiliary servomotors for the pump while it goes through its path,’‘ Bailey continued. ‘‘The controller needs to be fully synchronized so that it is controlling the pump in unison with the robot.’‘

Bailey went on to say that as the robot-mounted servomotor is dispensing the sealant, the motion controller regulates fluid output through the nozzle. Variables that the control system must deal with include the speed and position of the robot, as well as areas where a wider or narrower dispensing path is needed.  ‘‘If the robot falls off its position, the servo pump adjusts for the proper speed throughout its path,’‘ Bailey said.

Timely processing of vital information is important when working with motion controllers and other equipment, particularly in demanding applications such as dispensing. Precise Automation’s Brian Carlisle spoke to this when dealing with sensors in robotic work cells.

‘‘An important issue is how quickly and easily information gets to and from sensors and how that information is incorporated into motion-control algorithms,’‘ Carlisle said. ‘‘For example, take dispensing applications where a robot moves along a curved path to dispense a sealant. The vision system looks ahead of the robot, finding the edge of the object and communicates that position to the controller.’‘ Carlisle added that if it is necessary to have the robot move very fast or accurately, this communication must occur frequently, perhaps as often as every ten milliseconds.

Adept’s Keith Bailey agrees with Carlisle that continuous-path applications such as dispensing are among the more challenging to integrate into motion control. ‘‘Any application that has a continuous path is an order of magnitude more difficult than those that are point-to-point,’‘ Bailey said. ‘‘When getting into continuous-path applications, integrators are concerned with what that path looks like. The robot needs to maintain constant velocity throughout the path.’‘

If a dispensing job requires that the sealant be placed around corners or boltholes, there might be a need to vary the robot’s velocity through these contours on a three-dimensional path. Otherwise, the incorrect amount of sealant could be applied.

Huger also related other complex motion control applications. ‘‘Machines that produce cigarettes and cigarette papers are very complex. These are high-performance machines with complex motion functionality to ensure that twenty axes are working properly.’‘ Huger added that packaging, plastics, and converting machines are very complex, but not like that of printing or tobacco.

Motion controllers have to effectively work with various types of robots. Which types of robots are more easily integrated with motion-control equipment? ‘‘From a motion-control perspective, serial linked robots are the easiest type to integrate,’‘ said Erik Nieves, Manager of Technical Advancement at Motoman, Inc. ‘‘The good news is that Motoman has already done it for the end-user.’‘ Motoman is a robot manufacturer and controls-equipment provider headquartered in West Carrolton, Ohio.

Kiyoshi Hirakawa, Nieves’ colleague, had a different take on the easiest type of robot to integrate into motion control. ‘‘Gantries are the easiest, kinematically and dynamically, to integrate,’‘ Hirakawa said. ‘‘Each axis is independent of each other kinematically and dynamically. It is easy to solve the mathematical equation required of motion control.’‘ Hirakawa is Motoman’s Associate Chief Engineer in their Product Solutions Group.

Brian Jones, the Product Support Technician at Bosch Rexroth Corporation, Buchanan, Michigan, speaks about this. ‘‘Some motion controllers offer a visual-programming environment, while others offer a text-based approach. Some people are more comfortable with visual programming where they can point and click in a Windows application, while others are more comfortable with text-based programming.’‘

Jones observed that which programming environment to use depends on what the needs of the work cell are and the preference of the operator. ‘‘If the operator is more comfortable with a text-based approach there might be more headaches if that operator does not know what the icons mean. Conversely, if operators are more comfortable with Windows, they need to know what the keyboard commands are in a text-based environment.’‘ It is an issue with one’s comfort level and familiarity, taking into account what the operator’s past experience has been. 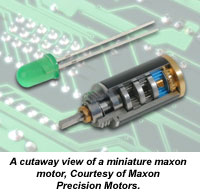 ‘‘In simple robotic applications, the same two wires that power the motor can be used to sense how fast the motor is going,’‘ said Michael Rogen, Vice-President of Electronics Sales and Marketing at Maxon Precision Motors. ‘‘Integrators do not need to add an external feedback element such as an encoder or a tachometer.’‘ Maxon is an accessory equipment supplier to the robotics industry located in Burlingame, California. In more complex applications, speed control is achieved by putting a tachometer on the servomotor or installing an encoder, where the frequency is proportional to the servo’s speed.

Rogen briefly explained how encoders on servomotors work. ‘‘The simplest encoder is a slotted disk mounted on the back of the motor shaft. Optical encoders have a light shining through the disk, where electronics change that into a pulse train.’‘ Encoders function by sending out pulses between the servo, the robot and the controller. The frequency is proportional to the speed of the motor, while the controller monitors feedback. There are magnetic encoders apart from optical and mechanical varieties.

A step up from speed control is position control. ‘‘Operators need to make sure the servo is where it should be at a specific time. An encoder is used for applications where a position controller is constantly monitoring the robot. The controller is constantly looking at the encoder signal and is saying ‘where am I and where am I supposed to be?’,’‘ Rogen said. Based on the information the encoder gets back from the motion-controller feedback, it adjusts current and voltage in the motor to maintain its proper position and speed.

Controlling Trends
What trends are there in motion control and what will these trends lead to? One direction in robotic motion control is towards distributed motion, which is the concept of axis management over a network such as ethernet.

Brian Carlisle sees distributed control growing in the next few years. ‘‘Precise will introduce a scalable motion controller that is based upon distributed architecture. Work cells can have a single smart axis or have one controller that manages multiple axes. This controller can network individual axes or network one axis with a multi-axis controller together over ethernet.’‘ The controller will have the ability to handle up to six motor drives, using its built-in language or that of a PC. Several controllers can be coordinated through this platform.

Another trend that will mark the future of robotic motion control is the radical reduction in size of the electronics that constitute the controller itself. Keith Bailey looked at the Incredible Shrinking Controller. ‘‘Adept used to make a four-axis robot that had 113 wires coming from it to a control cabinet, which had the amplifiers inside,’‘ Bailey said. ‘‘Now, a lot of those electronics are located right on the robot. In doing so, there are only 13 wires coming from the amplifier, not 113.’‘

Like Keith Bailey, Brian Carlisle believes the salient consequence of the miniaturization of motion-control electronics is the reduction of hundreds of wires running to and from the controller down to a dozen or so.  ‘‘In the past, there could have been up to 300 wires going between the robot and the controller. The wires and their connectors were expensive and bulky,’‘ Carlisle said. ‘‘Recently, there has been the development of ‘smart’ amplifiers which can be distributed in a daisy-chained network. Now, there are only 13 wires, composed of power, the network and some safety signals, that run to and from the amplifiers.’‘ 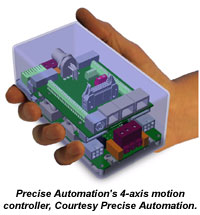 The reduced size of control electronics and decreased need of wiring allows robot makers to mount amplifiers near the motors. This reduces the electrical noise getting into the encoders. Another benefit of miniaturization is that the controller can be mounted on the robot itself so that they essentially an integrated unit.

‘‘One of Precise Automation's design objectives is to make obsolete the idea that controllers are separate big boxes with giant cables going to the robot,’‘ said Carlisle. ‘‘We are putting robot controllers inside the mechanism and eliminating external cables and boxes.’‘ The goal is to produce a four-axis motion controller that is the size of a calculator, that would include power amplifiers, the CPU, I/O connectors, and be able to communicate with intelligent devices over ethernet.

Keith Bailey speculated on what the near future will bring should this trend continue. ‘‘Eventually, servomotors will be ‘intelligent’, with drive packages and control electronics built right onto the motor itself.’‘