In these days of skyrocketing energy and magnet costs, green design has moved beyond buzzword to practical necessity. Gone are the days when manufacturers routinely oversized motors and moved on to the next part of the design. Careful choice of motors delivers optimal performance, reliability, energy efficiency, and acquisition cost. Let's take a closer look at how and why.

If we lived in a perfect world, assuming a rigid machine would result in an ideal motor choice. The reality is that all machines have some degree of compliance. Effectively accounting for that compliance requires complex, detailed analysis — mechatronic modeling, supported by an increasing range of commercial software tools. “To be able to optimize, to really do the hard-core engineering required and that's been something that historically has not been easy to do," says Michael Cromheecke, product portfolio manager for the mechatronics portfolio at Rockwell Automation (Mequon, Wisconsin). "There's a significant learning curve required, a lot of engineering investment, a significant detailed understanding of the mechanics of the problem in order to truly optimize the system. Most midsized organizations don't have that kind of engineering horsepower, so they tend to err on the side of caution and oversize using traditional rules of thumb."

Keeping it safe
For years, the de facto industry standard to compensate for the negative impact of compliance in the mechanical system was to design to a 10:1 ratio between load inertia and motor (essentially, the rotor) inertia. It's a ballpark number that sets a base level on the ability to control the load in a close-loop system that encompasses the electrical, mechanical, and control systems. The larger the inertia mismatch, the more it amplifies the impact of compliance on system performance. "It's like pulling a trailer that's too large for your car," says Cromheecke. "You may have enough torque to pull that trailer but at the end of the day when you have a disturbance in the system, that trailer may pull the car off the road rather than the car driving the trailer down the road. A lot of times machine builders would oversize their motor, not because they needed more torque or more speed but to make the inertia of the motor better match the inertia of the load.”

One rule of thumb was to start with the motor size used for a comparable system and add a 5% safety factor. While that might be a safe approach, when repeated over multiple generations of machines, this seemingly-benign rule of thumb often resulted in wildly oversized designs.

More recently, the proliferation of high-resolution feedback devices and the speed at which the control loops are closed in the drives make it significantly easier to control systems with higher inertial mismatch. The question is, how high? How do designers determine whether an inertial mismatch of, say, 50:1 is too much in a particular system? It becomes very dependent on factors like the compliance of the overall mechanical system, the quality of the mechanics, etc.

Although such modeling can be highly complex, an increasing number of systems houses have developed mechatronic modeling tools designed to help OEMs optimize their systems (see figure 1). “We see it as a technical task that suppliers of motion control equipment need to be addressing," says Cromheecke. "Individual customers can't necessarily assume the burden of [developing those tools] because of return on investment for their organization is not going to be there. They still have to make effort to change from the way they size motors today, but we're trying to reduce that burden so that they can enjoy the return on the investment that we make." 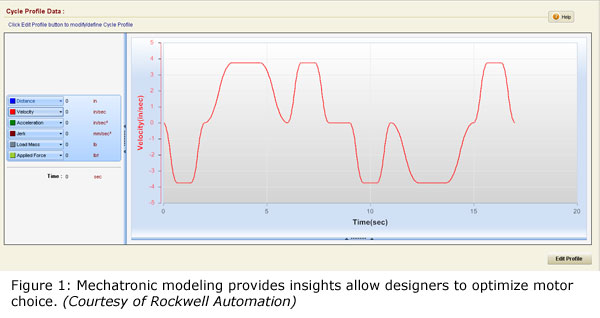 At the end of the day, the system will perform better driving the same load with a smaller motor. The motor may consume more power, but ultimately the system gets more power from a smaller amount of copper and magnet material. Ideally, designers should size the motor based on a 1:1 inertia mismatch, says Michael Mueller, product management at Bosch Rexroth Corp. (Hoffman Estates, Illinois). “When you have a one-to-one mismatch on the inertia, you can maximize your energy through the system and optimize your performance for a high level of repeatability, a high level of positioning," he says. "When you start having a large load inertia compared to a motor inertia it's hard for the system to meet the requirements of the application."

The idea is that the inertia of the rotor should match the reflected inertia coming back through the drivetrain. The effectiveness of this approach depends in part on the quality of the mechanical components of the system. "The more slop you have in mechanics, the more slop you have on the output side. Assuming a servo gearbox, or timing belt and pulley arrangements, now you can optimize and have really high gains in the control loop on the motor side and the result." Eliminating mechanical elements and going with direct-drive design can improve performance (see figure 2). 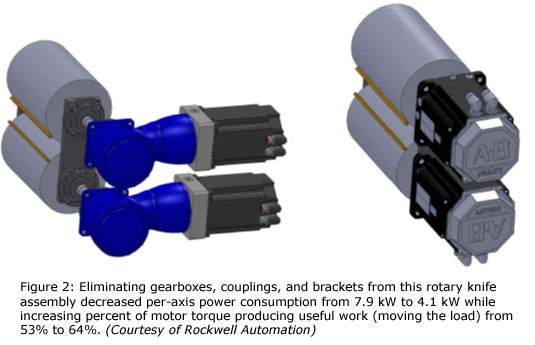 Keeping it cool
There was a time machine builders and system integrators tended to follow the "bigger is better" approach to motor sizing. In some cases, it was driven by a failure to fully appreciate the operating temperature range of the component. The motor that was hot to the touch was overtaxed, the thinking went. To build a system that would last for two decades or more, the best choice was to oversize.

While extended lifespans still apply for select applications such as glass manufacturing, most machines undergo retrofit or replacement in a fraction of that time span. As a result, the concept of oversizing motors to ensure long lifetime is no longer relevant. "OEMs that really drive this industry are probably on a three to five year design cycle," says Cromheecke. "The end-users are probably operating the machines longer than the OEMs are billing them as current offerings but probably in that 10 year window, the advantages of newer technologies create incentives to either buy a new machine or retrofit it to take advantage of the newer technologies."

The issue of motors running hot can present something of a trade-off. If the motor is buried within the machine, temperature is typically not a concern so long as the motor runs within its ratings. When the motor is on the outside of the chassis, it can present the potential for operator injury. In such a case, the designer needs to make a trade-off between the cost of going to a larger motor size and the cost of shielding operators from touch hazards. In certain applications such as injection molding of plastic, excess heat dissipated by motors can also potentially damage the end product, in which case end-users may want to oversize the motors to prevent heat buildup. Not only do the motors run cooler, they have larger chassis to dissipate heat.

Keeping it lean
Inventory reduction has traditionally motivated designers to oversize some motors so that the machine as a whole uses fewer distinct components. Yes, some axes wind up with far more muscle than necessary but the trade-off is limiting the amount of money tied up in manufacturing inventory for the OEM and spares inventory for the end user. This applies particularly in industries like semiconductor and automotive manufacturing that feature enormous production lines with high axes counts.

The trade-off for over sizing motors to simplify inventory management is that larger motor increases inertia on the motor side, potentially degrading performance and efficiency. "Now you’re losing energy," says Mueller. "The best move would be to use the optimal size of the motor and match that. Now you're going to have to have two spares on the shelf instead of one, but I think that it's the best solution for the customer."

“We really want customers to understand is what the right size is so that they can compare to that data and make an informed business decision as opposed to just applying rules of thumb and oversizing even the biggest motors to reduce the spare parts inventory," says Cromheecke. "They're doing it relatively blindly today and in a lot of cases we just don't think that's the right thing to do. It's a business session that the company needs to make—we just want them to make it based on a full set of data."

Sizing motors is a nontrivial task that can significantly affect the performance and economics of the final system. Although the standard industry rules of thumb can be simple, for many applications, detailed modeling via industry tools may be the best solution.

Bosch Rexroth Celebrates 40 Years of Business in the U.S.

Why You Need to Adopt PLC Software