Checking in on the Rare-Earth Magnet Market

From the record highs of 2011, prices in the rare earth market have dropped to record lows; find out where they’re headed next. 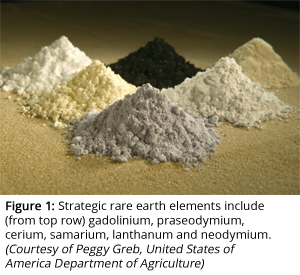 In the summer of 2011, the price of rare earth elements (REEs) was skyrocketing, blasted upward by uncertainties around sourcing. Today, oversupply has driven prices in the opposite direction, as much as an order of magnitude lower than at peak. IF you’re a motor builder or an OEM, it’s a happier situation but don’t get too comfortable. Although the market appears stable in the short term, a number of initiatives promise changing conditions in the very near future.

Before we discuss the current state of affairs, we need to review some of the basics of the market. For starters, REEs are not rare. They exist in the same abundance as industrial metals like copper, zinc, and tin. They get their name from the fact that they are seldom found in concentrated deposits, occuring as mixtures of rare earth compounds that have to undergo multiple steps as part of separation and refining (see figure 1). This adds to the time and cost of production, particularly since extraction and processing can produce toxic or even radioactive waste.

There was a time REEs were sourced around the globe. Since the 1990s, however, China has dominated the world market for rare earth materials, thanks to a combination of favorable deposits and wildcat production (read about this in detail in “Market Update: Rare Earth Magnet Prices and Motion Control.”) Circumstances enabled suppliers to continuously improve performance while dropping price, transforming motors based on neodymium iron boron magnets from the specialty items to everyday solutions for broad range of applications.

The situation remained stable for a good decade and a half. China established export quotas but they were in many ways pro forma – the actual amount shipped never came close to the threshold. Then in 2010, the Chinese government cut the export quota by 40%. Even though the number still wasn’t low enough compared to the amount ordered to limit the overall tonnage purchased, it triggered widespread concern about shortages. Customers began doubling and tripling orders, “just to be safe.” This created a self-fulfilling prophecy as manufacturers found themselves unable to keep up with the enhanced demand. Vendors began applying surcharges and requiring unheard of deposits. Prices rose, exacerbated by speculators who began hoarding material. During the worst period, pricing changed daily.

Here’s the most important thing to know, however – at no point were the quotas a real impediment to obtaining REEs via export. A widespread misconception in industry holds that the bubble formed because the Chinese government curtailed supply. That is not the case. The cut in export quotas was the precipitating event but it was the response of customers and the supply chain that caused the problem, not an absolute limitation in the supply.

The supply instability may have had motor designers and OEMs panicking but it did have a silver lining. With the increase in profitability, REE production became financially viable again for organizations outside of China, most notably, Molycorp in the United States and Lynas in Australia. Meanwhile, motor designers and machine builders began searching for alternatives. Instead of using top-grade neodymium magnets because they could, they chose magnets and motor designs more appropriate to their application.

It took several months to manifest but eventually the bubble started to deflate. Alternative supplies came on board. Engineers began investigating REE-sparing and REE-free options. As demand softened, speculators started unloading their inventories, causing prices to fall by the end of the year.

Life after the bubble
What goes up must come down, and the rare-earth market has done so with a vengeance. Driven by a number of factors, prices have dropped by as much as an order of magnitude from peak. A  ruling by the World Trade Organization, upheld in 2014, required China to eliminate export quotas and export tariffs. The quotas that triggered the panic to begin with are now gone. Removing the tariffs brought prices down even more. “There was supposed to be a replacement tax applied upstream to enable the Chinese government to recover some taxes, but it didn't really impact the price,” says Gareth Hatch, founding principal at Technology Metals Research (Carpentersville, Illinois). “So, in fact, there was a step function drop in price once the tariff went away.”

Oversupply is an even bigger problem. Unlike DRAM manufacturers during a memory glut, licensed producers in China can’t just pause production on their own until the market corrects itself. Each year there is pressure to meet government production  mandates, despite already stockpiled material, in order to secure production quotas for the following year. “The overall issue is overcapacity – overproduction and lack of transparency with respect to inventories of rare earths,” says Hatch. “There are production quotas for new-mined material, even while it’s clear there are significant quantities of material in inventory.”

Lower prices are good for end-users but have created turbulent times for REE manufacturers. In its third-quarter results, Lynas, which produces neodymium praseodymium (NdPr) at its Mount Weld mine reported a 19% drop in NdPr prices over the quarter. It cited illegal mining in China as a particular problem. “We understand that illegal producers currently represent almost half of China’s Rare Earths production,” the report reads.

The pricing is taking its toll. Molycorp, which had to take on the cost of environmental mitigation to even reopen its Mountain Pass, Califonia mine back during the bubble has filed for bankruptcy. As of August, it moved Mountain Pass into “care and maintenance” mode. At the 7th China Baotou Rare Earth Industry Forum in August, Chen Zhanheng, deputy secretary-general of the Association of China Rare Earth Industry, said that nearly 90% of the Chinese rare-earth producers have reported losing money this year.

Overcapacity goes beyond just production of the REEs. It also extends further downstream to manufacturers of sintered neodymium iron boron magnets. “China’s got a massive production overcapacity for sintered neodymium iron boron magnets,” says John Ormerod, senior technology advisor for Magnet Applications Inc. (DuBois, Pennsylvania). “It’s estimated they’re probably at the 50% utilization. At the same time, they’ve already got an enormous share of the market, so there’s not a lot left for them to grab. You have all these manufacturers chasing customers and the lever that they tend to use is price.”

“I have talked with the biggest manufacturers and they have at least six to 12 months of inventory for their magnets,” says Leo Cao, senior engineer at Alpha Magnet (Yorba Linda, California). “Now they are feeling that demand for rare-earth magnets is really weak. I think the price is not rising too much and the market is still very stable.”

The road ahead
OEMs are machine builders shouldn’t expect to continue to buy rare-earth products at rock-bottom prices forever. The most recent set of numbers from the Association of China Rare Earth Industry and that the tide is ready to turn, says Ormerod. “Looking at the pricing as of the end of September, there are first signs that the raw material pricing across the board is starting to bottom out.”

The Chinese government is attempting to curtail illegal mining. In widely reported comments from the rare-earths lament, Yinsong Jia, director of Rare Earth Department of Ministry of Industry and Information Technology of China (MIIT) reported that from September 2014 to May 2015, the Chinese government shutdown 67 operations, confiscating a total of 12,400 tons of materials with a value of RMB 2.2 billion.

On the legal side of the market, China is consolidating producers into six officially licensed organizations, a process slated to be complete by year end. This is intended to allow it to better manage the market. In this new framework, at least one company has temporarily suspended production, according to Cao. Don’t be surprised if this happens elsewhere.

Together, these moves promise to put upward pressure on prices. This would be welcome news to non-Chinese suppliers, who would have an easier time of competing. As another approach to achieving the same end, work is underway on a number of methods for reducing the cost of processing, including molecular recognition technology, electrophoresis, rapid solvent extraction, and microfluidic solid extraction.

The summary is that downstream customers and end-users will likely face higher prices going forward, but a market populated with a more or less stable cast of characters with well-behaved pricing. “For years, folks have said, ‘We don’t mind higher prices, so long as they are affordable,’ but what we want is stable prices,” says Hatch. Given the lifetime of many of these products, OEMs need to make assumptions and projections with respect to component costs in order to plan production. “You have that whole debate of whether or not to do a lot of forward buying and acquire inventories and so on, which ties up capital. So they need to know what this magnet is going to cost one year from now, two years from now, five years from now.” As this topsy-turvy half decade draws to a close, perhaps we will.