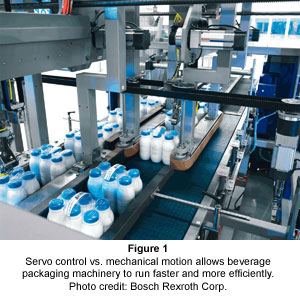 Like the confection and snack food industries, the beverage industry for the most part makes its money on high volume production. Given that, it is hardly surprising to find OEMs increasingly adding motion control to beverage machines ranging from fillers and cappers to cartoners and case packers. Servo motors provide speed, responsiveness, flexibility, and reliability that can bring machine builders and end users alike a competitive edge and fast return on investment.

Unlike in some industries, motion control has only in the past few years seen significant adoption in the beverage industry. “A very few OEMs have been using it for 10 or 15 years but even as recently as five years ago, probably 80% of machines were all mechanical,” says Dan Throne, sales and marketing manager for the electric drives and controls division at Bosch Rexroth Corp. (Hoffman Estates, Illinois).

In part, plants simply didn’t have the in house expertise to work with motion control. That led to what Throne calls servo backlash - of the psychological, not mechanical, variety. “Some of the early adopters went very heavy on servo technology but the plants struggled with maintaining it so that some of the OEMs actually went back to more mechanical systems, even though servo motors had significant benefits. The plants were just not familiar with the technology.”

Today, that has changed, in part because of increased simplicity of the technology and in part because users have become more educated. “It's really different than when we first introduced machines with servos in the early 90s,” says Robert Beesley, engineering manager at packaging machine builder Hartness International (Greenville, South Carolina). “It really scared people. Nowadays, no one even blinks at a servo.”

Motion control in the manufacturing line
The weakest spot of a cartoning line is product loading and handling. In the beverage industry, processes can run at up to 2000 bottles or cans per minute. If a traditional machine jams, the operator has to pull out the filled cans, remove the damaged cartons, then resynchronize and restart, a process that can take 20 to 30 minutes. At beverage volumes, that can amount to tens of thousands of dollars of lost production.

With electronic shafting and synchronization, frequency of jams drops. If a problem arises, absolute encoder technology means that operators just need to remove the jam and restart the machine -- the motion picks up right where it left off at full production speed, without need for rehoming. 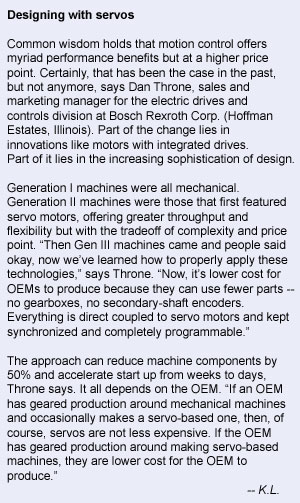 There are other benefits of motion control, including system cost. “Mechanical packaging lines have $30,000 to $40,000 gearboxes in between machines to synchronize them,” says Throne. “You can put in motion control at less than half that price [see sidebar] and keep it better synchronized and have better recovery after a jam. Because those big, expensive gearboxes need to be replaced every few years, the return on investment [for the motion control] is very fast.”

From cartoning, motion control has moved out into the line in both directions: upstream, to the filling, capping, and labeling areas; and downstream to case packing and palletizing.  Hartness, for example, first implemented motion control technology on its 2800 drop packer, which vertically lowers bottles into cartons. Today, they use motion control in a range of products, including a nine-axis shrink wrapping machine that erects cardboard trays from blanks, loads them with bottles, wraps them in plastic and shrinks it around them at the rate of 100 cases per minute. “It would be totally impossible without servos,” Beesley says, citing the control, the capabilities, the speed, and above all, the flexibility to, for example, switch from a six pack to a 24 pack with a single command to the human-machine interface (HMI).

The polyethylene shrink-wrap film, often printed with labeling, arrives in the form of 300-lb rolls. One axis in the Hartness shrink wrapper unspools film and feeds it into the machine, where a photo detector scans the print. The feedback allows the axis to adjust on the fly to position the labels on the film properly and ensure that the web material isn’t stretched or distorted.

The film is metered into the wrapping section on a vacuum belt, cut, then wrapped around the tray of bottles, all by servo motors. Another servo axis conveys the package to the heat tunnel. It might be possible to perform these steps with a mechanical system, but electronic shafting offers benefits that mechanical systems simply can’t: not just speed of changeover but the ease of setup. Beverage manufacturers frequently switch materials and suppliers. Even with the same supplier, polyethylene films can change from batch to batch. Servo motor-based systems allow users to make fine adjustments to compensate; not so with the cams and gear heads of mechanical machines. “We wouldn't even attempt to build [the shrink wrapper] without servos,” Beesley says.

Designing for washdown environments
Like many food applications, the beverage industry presents particular challenges. Cans and bottles can break in the filling area, pouring liquids over the components. More problematic is the washdown environment, particularly in the use of caustic chemicals such as lye and sodium hypochlorite. 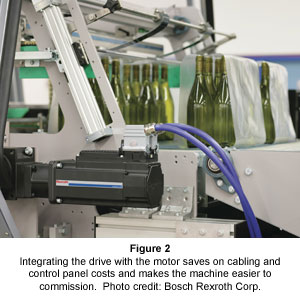 The punishment of washdown requires more than just standard motors. OEMs turn to components with ingress-protection ratings like IP 65, which means enduring pressures as high as 20 psi, or IP 67, which can survive 20 minutes of submersion at 1 m. Such motors may use o-ring gaskets to seal the front shaft, or more sophisticated treatments like interlocking labyrinth seals or stainless-steel front plates that cover the whole front of the motor save for a small aperture that allows the shaft to pass through.

Washdown conditions even complicate the selection of housing material. All things being equal, aluminum is the material of choice for motor cases because it is lightweight, economical, and good at conducting heat. The problem is that alkaline solutions like bleach and sodium hypochlorite rapidly degrade the metal. Anodizing the aluminum makes it robust against them but lye remains a problem. Coating aluminum with food-grade epoxy paints provides more defense against caustics; it’s not impervious to everything, however.

“The downstream end of a packaging line in many cases is a terrible environment,” Beesley says. “We have lots of broken glass and sticky product and mold so we’re limited as to the equipment we can use. Breweries are really tough because they typically wash down with pressure washers and they run at very high production rates, 24 hours a day.” The answer? “We build a lot of stainless steel equipment.”

Stainless steel holds up well to nearly everything, but it’s heavy, expensive, and, perhaps most important for motor applications, has a very poor heat-transfer efficiency. As a result, using a stainless steel motor often means oversizing the motor for the application, increasing cost. As always with motion control, design is a series of tradeoffs. 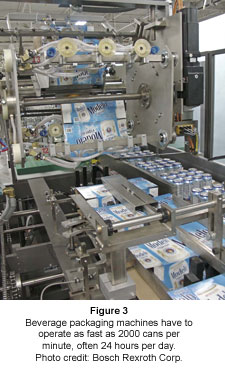 Smart drives soar
One approach to protecting delicate drive electronics is to seal them in cabinets, but for designs with 10 or 20 axes, such cabinets can be so large they have to be placed at a distance from the machine, or even up on a mezzanine. That means running separate cables to each motor, which can be expensive and introduce more points of failure. To simplify architectures and reduce components, engineers are now turning to distributed control with smart motor/drives. Instead of running dozens of cables over hundreds of feet, machine builders integrate the drives on the motors and daisy-chain those drives together. The result is reduced cabling volume and cost, and fewer failures. Installation gets faster and cheaper, the electrical cabinet footprint drops dramatically. “We've been distributing intelligence down as low as possible because the more you distribute down, the faster it is and the cheaper the controls architecture becomes,” says Throne. “We put the drives into epoxy-sealed boxes right on the motors and they survive in the harshest environments.”

B&R Industrial Automation Corp. (Roswell, Georgia), works with OEMs who build machines that fill and cap in the same location. The machine builders use drives with memory and processing capability to help simplify maintenance. “The drives have intelligence to monitor hundreds of parameters,” says sales engineer Dario Doko. “Temperature, brake status, encoder/resolver values, internal calibration values; every single one can be monitored.”

The drives can send an alert to maintenance when they need to be replaced. Even better, replacement can be as simple as powering down the machine, removing the failed device, installing the smart card from the old drive into the new one, and powering back up. Software downloads automatically; if the OEM upgrades software, they can even mail their customers a new smart card to install the updated code.

The consensus is that the technology has moved beyond the early adopters to general use. Motion control allows businesses to compete in a way that mechanical machines simply can’t, offering savings too significant to ignore. “You have to be competitive in this day and age,” says Beesley. “Several years ago, it would have been very difficult to sell a machine with nine servos but the perception of our customer has really improved.”

“When you start to reduce the cost of machines by 30%, people have got to find a way to do it,” Throne says. “We've had a lot of acceptance in the beverage industry in these last five years because the innovations are so significant they can't argue with the benefit.”

Getting the Most from Belt and Rack-and-Pinion Driven Actuators