All Together Now: Networked Robotics

Robot networking, where multiple robots operate together in coordination with controllers, computers, and humans while working toward a common production goal, is a means to ensure efficiency and safety within a work cell. Ethernet connections usually link networked robots together. While networking robots have its benefits, care must be taken to ensure the security of these systems.  "Robots use a real-time Ethernet network to communicate between controllers and to synchronize the robot’s program execution and motion. Networked robots cooperate with each other, perform different tasks, share loads, and operate in the same work space because they can communicate their positions to one another,’‘ says Joseph Kraus, Product Manager at KUKA Robotics Corp., Clinton Township, Michigan.

‘‘Robots for years have been interconnected through their own internal control structure to execute coordinated motion tasks with external axis and other positioning devices,’‘  says Greg Garmann, Software and Controls Technology Leader at Motoman Inc., West Carrollton, Ohio. ‘‘Now with the additional communication, robots have become more intelligent by being able to process more data faster, and then using the data to interact with outside networks and systems.’‘ 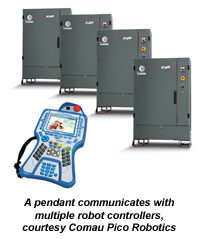 Network Advantage
Networking robots gives manufacturers the ability to coordinate the motion of several robots to increase production without causing collisions. Anthony Ventura, Applications Development Engineer at Comau Robotics, Southfield, Michigan says ‘‘ Networking is built into robots with a standard data port. Networking robots is similar to networking computers, and is based on similar principles.’‘

Baird goes on to give an example of networked robots in a packaging application. ‘‘A system of multiple robots operates on a packaging line with products flowing on a conveyor belt that includes line balancing, yields, and hand-shaking. Networked robots can automate customer orders, orders parts from a warehouse, schedules forklifts, sets production line operations, and palletizes parts for shipping.’‘

Likewise, Claude Dinsmoor, General Manager, Product Development at FANUC Robotics America, Inc., Rochester Hills, Michigan says ‘‘Layout and configuration of network traffic needs to be considered, especially in networks where I/O networking is done via Ethernet. Paying attention to the broadcast domain of devices using managed switches is necessary to prevent unwanted traffic from being seen by every device on the network.’‘

Dinsmoor goes on to say, ‘‘Configuration also involves determining how network and device addressing will be accomplished, such as how Dynamic Host Configuration Protocol (DHCP) will be employed for an Internet protocol address for the various devices deployed in the system.’‘ Dinsmoor maintains, ‘‘Network complexities can be managed by carefully planning and prototyping, and by trying out configurations prior to deployment.’‘ Dinsmoor concludes by saying that integrators need to have a good understanding of Ethernet fundamentals.

‘‘If time is taken up front to determine the amount and types of data that will be required, the actual implementation will go much smoother as will maintaining and deciphering the data,’‘ Baratti stresses.

Remote Robots
Networked robots have the ability to remotely diagnose some problems with the system and in some cases, fix them. ‘‘Remote diagnostics is something that people have talked about for a long time. If robots using PC-based controls running Windows XP have a network connection, operators can use the remote connectivity capabilities of Windows XP to remotely see everything that is on the robot controller's user interface,’‘ says Joe Kraus. As a caveat, Kraus points out that, ‘‘Remote diagnostics is easy although fixing hardware problems remotely can be difficult, especially if things need to be taken apart.’‘

Ventura also speaks of the advantages that remote diagnostics bring to robot-based manufacturing. ‘‘Integrators can network robots so a technician in Italy can log into a robot located in the United States to manipulate files, as well as activate and deactivate programs.’‘ Technicians cannot remotely move the robot’s arm, Ventura says, as doing so could cause harm to people and other equipment.

Garmann recalls that a system recently was installed with the ability to communicate production data from North America to Europe through an Internet connection to report to the business unit that another part had been produced and was considered inventory and ready for purchase.

Baratti also refers to remote diagnostics of networked robots. ‘‘Robots use the Internet for remote monitoring of networked systems. A proper firewall is required to ensure that a robot is only accessible to authorized people.’‘

Baratti continues by saying, ‘‘Networked systems have the ability to page technicians when an error occurs and to send full reports to remote supervisors to check system performance. Controlling a system remotely is not advisable without having a person near the machine to ensure that the changes made do not create unsafe conditions.’‘

Baratti also contends that mechanical problems are not repaired remotely. ‘‘Monitoring ongoing errors allow a remote supervisor to make maintenance recommendations, or recommend repairs prior to a complete component failure.’‘ 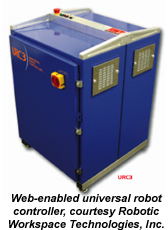 Security is a concern when networked robots are remotely accessed. Walter A. Weisel, Chief Executive Officer of Robotic Workspace Technologies (RWT), Fort Myers Beach, Florida says, ‘‘Networked robots need to have security lock-outs based in the software and a physical key rather than just a software key. Unauthorized people could reprogram a robot to add some items or endanger source code.’‘

In a similar vein, Keith Goodreau, Operations Manager at CIS Technical Solutions, Windsor, Ontario, Canada, states that few manufacturers will have a truly open robotic network. ‘‘Not many companies that will allow robots to be hooked up to a communication link outside the plant where it can be accessed by somebody outside the facility. Companies do not want anyone tampering or hacking into the system, causing a crash and causing bodily injury.’‘

Dinsmoor also has security issues on his mind when it comes to networked robots. ‘‘An obstacle to Internet-based access to robots is maintaining sufficient network security to access the robot. Typical manufacturing facilities do not allow direct access to manufacturing equipment from the Internet,’‘ Dinsmoor says.

‘‘Manufacturing engineers use the factory’s internal network to monitor and maintain the system. Since large facilities may span hundreds of thousands of square feet, knowing what is happening on a downed production system can be a big time saver.’‘ Dinsmoor also states networked robotic systems help minimize the financial impact of production systems when a fault does occur.

Networked Apps
Some applications are more suited for networking than others. Weisel says material handling is one of the easiest applications to implement into a networked robotic system.

‘‘Networking material handling applications have good systems for stacking, but gripper design is important. If a pallet is going to have boxes placed on it, the ability to move boxes close to each other could be a difficult task if the wrong gripper is used.’‘ Weisel adds ‘‘The ‘magic’ come from an applications engineer who knows how to design a gripper and integrate it successfully into a networked system’‘

Dinsmoor says ‘‘Applications using standard hypertext transfer (HTTP) or file transfer (FTP) protocols are the easiest to configure since these are typically well integrated into PC applications and tend to be plug-and-play. Real-time applications require more setup since they may require custom protocols and application-specific settings.’‘

Networked Future
A recent trend toward wireless robotic networks will continue in the next several years, predicts Dinsmoor. ‘‘Standard WiFi wireless networking will become a larger factor in applications where mobility of equipment is required or portable monitoring of the automation system is needed.’‘

Baratti sees networked robotics systems becoming more autonomous. ‘‘The future of networked robotic systems through the Internet can bring manufacturers much closer to the ‘lights out’ concept of manufacturing. Automated systems networked into the Internet will be able to receive orders from point-of-sale locations all over the world, manufacture the product, pack, label, ship, and invoice all within minutes of the order being placed,’‘ Baratti foresees. ‘‘Not only will robotic system be capable of building the products that are ordered, but they will also reorder supplies automatically as well…everything from raw materials to consumables.’‘

Weisel sees improved communication among different makes of robots so that work cells are not ‘‘Islands of Automation.’‘ ‘‘For many years, the robot industry was considered ‘Islands of Automation,’ because different makes of robots did not communicate with each other. Robot manufacturers did not use a standard language and each had a proprietary controller,’‘ Weisel remarks. ‘‘After 30 years, the robotics industry has started to come around and has begun the trend towards a standard programming language.’‘ Weisel asserts now is the time for a common programming language to be used in robots and their controllers and to trend away from proprietary packages. ‘‘The ability to communicate between different makes of robots and controllers is where the robot industry of the future stands.’‘