With the addition of memory and processing power, AC inverter drives can perform simple positioning or even run permanent-magnet motors, offering an economical middle ground between high-tech servo motors and AC induction motors. 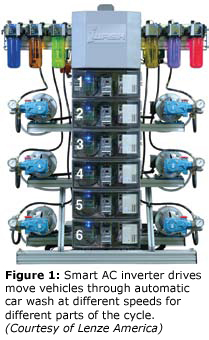 The emergence of AC inverter drives
For many years, the DC motor was the only practical choice for variable-speed applications. The problem was that the carbon brushes used to carry current into the armature would wear over time, increasing maintenance demands and decreasing reliability.

The development of the insulated gate bipolar transistor (IGBT) gave rise to the AC inverter drive and the availability of variable-speed operation from AC induction motors. An AC inverter drive takes AC input and converts it to DC, then applies variable-frequency pulse width modulation (PWM) power to simulate an AC power source. By varying the output frequency and voltage, an inverter drive can generate a simulated AC output waveform to drive the motor at a range of speeds.

The development made AC induction motors practical solutions for a wide variety of applications. Today, more and more industries are taking advantage of variable-speed capabilities, not only for process control but also for increased efficiency. For fan and pump operations in the petrochemical and process industries, for example, adjusting fan output with a variable-speed motor rather than a motor/damper combination provides big savings. “Because of the affinity laws, which reduce the load as the cube of fan speed on a centrifugal application, if you reduce the motor speed by 20%, you can save nearly 50% of the energy,” says Rich Schaefer, Senior Product Manager for variable speed and specialty motors at Baldor – A Member of the ABB Group (Greenville, South Carolina). "So now there is a huge market there in terms of market applications going to variable-speed to save energy.” The AC inverter/induction motor combination provides an economical, robust method to achieve that performance.

AC induction motors do have limitations, however. The design produces torque from a phenomenon known as slip. With an induction motor, the rotor circuit must be induced by the stator winding field, In operation, the motor slips in producing torque relative to the load being applied. Factors like friction, motor heating, and the force of the load itself can further affect motor speed. As a result, the actual speed of an AC induction motor will be somewhat slower than the rated synchronous speed.

The rotor of a PM rotor synchronous motor features permanent magnets, so the designs are inherently free of slip characteristics—they operate precisely at the frequency commanded by the drive. On 60 Hz power, a four-pole PM rotor synchronous motor will run at precisely 1800 rpm, for example, whereas an 1800 rpm induction motor might actually run at 1750 or 1755 rpm. With the addition of a feedback device, an AC induction motor can achieve much more accurate speed control. The AC permanent magnet rotor motor provides even greater performance due to its lower rotor inertia capability and reduced heating.

Of course, not every application needs highest performance. In between variable-speed fans and packaging machines bottling 300 parts per minute lie a variety of simple, point-to-point motion tasks. Here, the new generation of intelligent AC inverter drives can bring big benefits. The positioning requirement for a rotary table presenting parts for spot welding, for example, may be at a level of centimeters rather than microns. In such a case, a motor/AC inverter drive combination can provide a more economical solution than the classic servo motor. 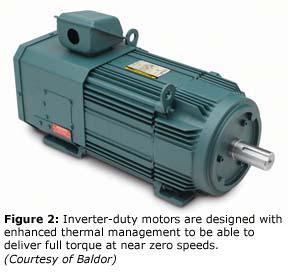 Drives for motion
In the past, most AC drives lacked the sophistication to run permanent-magnet-rotor motors. With the addition of PM control software, onboard processors, and memory, many of the latest crop of inverter drives have the capability to not only run permanent-magnet-rotor motors but to perform simple positioning without the aid of feedback or a motion controller/PLC. "Today, everything is digital," says Michael Offick, Managing Director of Industry and Application Engineering for Baldor – A Member of the ABB Group (Greenville, South Carolina). “[AC drives] can count additional revolutions or pulses so you can reasonably accurately rotate/move to hit a defined point that says stop, but even though the drive is an inverter, it can command the motor to go a specified distance further. Now, it's not as accurate as a true servo motor with a high-pulse-count encoder, but it's the kind of thing you can do basic positioning with—and that drive can also run a permanent-magnet rotor motor." One of the benefits of the inverter approach is that it yields a simpler system. A simpler system means one with fewer points of failure, more than likely less expensive, and easier to assemble and to troubleshoot.

Adding onboard intelligence enables AC inverter drives to even handle more sophisticated energy-management functions such as varying horsepower on a minute-by-minute case, says Craig Dahlquist, Application Engineer at Lenze Americas. “Say we’re running a 5-hp drive and the load only requires a 2-hp drive. We can control that motor so that it only uses the current of a 2-hp motor. As soon as the load changes, it will adjust itself almost instantly, depending on the increase in load.” Consider a conveyor belt in the baggage claim section of an airport. The load presented by the conveyor is very different when the belt is empty versus when it is full of luggage. “A plane comes in and the workers start to put bags on the conveyor," Dahlquist adds. "All of a sudden, the motor needs to work hard now and the controller can automatically adjust to that load."

“There is additional intelligence and logic in the new drives, so we can set them up to start and stop at certain speeds, add accelerations, decelerations, any braking that you want to program, and so on,” says Tom Robbins, Product Leader for the Lenze AC Tech inverter group. A good example is an automated car wash that needs to move the vehicles more slowly during the wax segment than the wash portion. "In the past, customers have had to buy a separate PLC to connect with the drive to do that type of motion, but for some of the applications, the drives themselves can now do that.”

Although the right AC inverter drive can handle both AC induction motors and permanent-magnet-rotor motors with the appropriate software, it's not as simple as buying any old motor with matching horsepower requirements. A lot of applications require full torque at very slow speeds. AC inverter drives allow systems to vary motor speed from high speeds down to zero speed. The problem is that most motors are cooled by a fan attached to the shaft—the speed drops too low, the motor loses its ability to cool itself. That issue has led to the development of inverter-duty motors designed with enhanced thermal management such as specialized winding design, PWM-capable insulation systems, as well as alternative heat-transfer technologies. “They’re designed to give constant torque from base speed all the way down to zero speed," says Schaefer. "The motor industry has progressed from just taking a sinewave motor and putting it on an inverter to specialty motor designs that really provide outstanding performance when you match them up with the drive.”

The new inverters have given users more options in terms of being able to choose exactly what they require. Users can tailor their inverter to the application, which allows them to be as economical as possible. The approach also offers potential for additional cost savings through inventory reduction, allowing designers to use same AC induction motor and the same drives to run a fixed-speed fan as to operate a variable-speed conveyor belt. "A lot of manufacturers require more intelligence from their inverter so that they can run a simple application such as a conveyor as part of a complex application," says Richard Sowah, Commercial Marketing Engineer for Omron Automation & Safety (Schaumburg, Illinois) for servos and AC drives. “In one machine, you could have a conveyor, a pump, and have a form/fill/seal mechanism, so there is a lot going on—a lot of axes, a lot of motion. Some of the axes require precision and some of them don't. Customers want to be able to just use an inverter that will not only run a conveyor but also run a pump. It requires the drive to be able to do more than just run the motor.”

And this is only the start, Offik says. "I think we’re going to continue to see microelectronics and networking drive down prices and add capability," he says. Ultimately, though, engineers need to remember to focus on the best solution for their application, not just the best solution. “With capability you can sometimes add complexity, so you have to also work on the simplicity. You have to look at your application and figure out what you need so that you don't over engineer and still have the performance you want."

Motion Control is Blowing in the Wind