For years, machine vision integrators have done whatever they can to keep new applications monochrome and 2D. Working in grayscale reduces data flows from the camera compared to color and 3D applications, simplifies hardware selection by avoiding more advanced lighting methods, specialized pre-processing and reduces cost.


But companies like SICK and LMI Technologies are changing this situation. Based on decades of developing techniques for 3D imaging for the lumber industry – arguably one of the toughest machine vision applications thanks to the varying shapes of logs and boards and the need for 3D measurements at high speed – both of these companies are applying their knowledge to make 3D vision as simple as 2D smart camera applications. As a result, the vision industry is experiencing levels of integration, plug-and-play capability, automated setup and calibration, and other benefits that have only been seen in baseline smart camera machine vision solutions.

Today, end users have several options available to them:

While single-point measurement systems are widely used in applications from construction to manufacturing, these systems do not typically generate “images.” However, when combined with a scanning mirror, these systems can generate 3D point clouds for low-throughput, small field of view 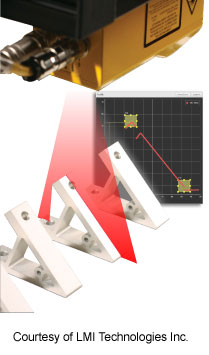 Most industrial applications seeking a high-speed 3D measurement or quality control solution turn to laser triangulation and stereovision solutions. “There are many 3D technologies today – time of flight, triangulation (using a laser or LED pattern projector), active stereo (decoding a structured pattern projected with lasers or LED light), passive stereo (matching the edges in a scene), etc.,” explains Terry Arden, CEO of LMI Technologies (Delta, British Columbia, Canada). “The most robust methods are triangulation and active stereo. The other methods are either too limited (confocal methods of focus/defocus with limited measurement range/FOV), too inaccurate (time of flight is only accurate to 5-10 mm and highly dependent on scene reflections), or too unreliable (passive stereo matches edges between two different images, which are highly dependent on ambient lighting).”

“Stereovision is really a software solution,” adds Jim Anderson, Vision System Product Manager at SICK, Inc. (Minneapolis, Minnesota). “At SICK, we do single-point measurements with optical displacement sensors, and profile triangulation with the IVC-3D Smart Camera, and the PC-based Ranger and Ruler, as well as time of flight (ToF) for long-range distance measurement. ToF has a lot of benefits, and we think the technology will become important, but right now there are limitations in speed. If the object is moving, ToF can blur. There are a lot of people in the industry right now trying to figure out how to make ToF technology more reliable for 3D imaging as opposed to point measurements.”

It wasn’t too many years ago that manufacturers maintained special facilities and highly trained technicians to make precision 3D measurements. Products were sampled and manually carried to a CMM room, with measurements made over hours or days. Today, advances in 3D integrated solutions and sensors have put that expert inside an IP67 industrial housing that weighs less than 2kg and takes little to no expertise to operate at speeds that a CMM could only dream of. 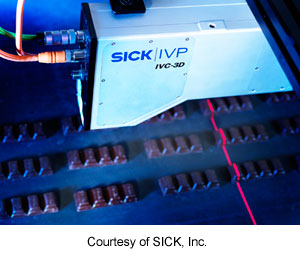 “We see the 3D market as a value pyramid starting with 3D components at the base, then 3D cameras, then 3D sensors that include optics, lasers, calibration – basically all you need – except these systems are for data acquisition only. You need a PC and software to take the 3D data and do something with it,” says Arden. “At the top of the value pyramid, there is the 3D smart sensor that has all the pre-calibrated hardware and software, including decision and control capability. That’s our Gocator series. Instead of exporting the data outside the sensor, Gocator has the processing power to carry out measurements and make a decision that can be output directly to a downstream PC or PLC for action.” Gocator also has the ability to generate 2D intensity images (grayscale) based on laser lighting, making the system versatile for both 2D and 3D inspection routines, including barcode reading and product tracking.

“The IVC-3D product was really the first smart camera to do 3D.” says Anderson.  “We have experience that we built from our PC-based systems to make the smart camera 3D more accessible.  It has a full set of integrated tools to evaluate images and profiles that is based on the same programing structure as our 2D camera.  Tools use height difference instead of contrast changes for setting thresholds.”

Both Gocator and SICK’s IVC-3D smart sensor solutions offer the ability to generate a 3D point cloud and the ability to make a measurement or decision for applications ranging from quality inspection to robot guidance. And both companies are exploring new versions of their smart 3D sensors that include structured light as well as laser line triangulation.

“The Gocator 1 series is for single distance measurements,” adds Arden. “The Gocator 2 series is what we have today and can do both 2D and 3D measurements using laser line triangulation. The Gocator 3 series will do full scanning without the object having to move through the field of view.”

Based on the growth of the 3D machine vision market, both companies expect further product segmentation to provide just the right amount of tools and ease of use for different levels of industrial applications. Structured light solutions look to be the next step on the ladder, but the evolution of smart 3D solutions certainly won’t stop there.