OCTOPUZ is intelligent offline robot programming and simulation software ideal for an application. OCTOPUZ took a revolutionary approach to robotic programming by combining the offline programming of robots with a manufacturing process simulation, perfect for tech AND sales teams. Contact us for a free, online demonstration tailored to your unique application. About OCTOPUZ Headquartered in Waterloo, Ontario, OCTOPUZ provides offline robot programming and simulation software for businesses of all sizes, from small shops to global corporations. Our focus is to provide a robotic software solution that not only enables companies to reach a higher level of efficiency with their processes but that also opens opportunities for them to enter new markets and expand their business potential . Our business was built on the concept of taking complex robotic programming and making it easy.

When disruptive technologies are introduced to the marketplace, there is an initial uncertainty among the general population about these unfamiliar products, services, or new ways of conducting business.

The unknown is scary; change is often met with resistance, and people may ask themselves how such innovations will affect their livelihoods and lifestyles. By definition, disruptive technologies are innovations that create a new market and value network, ultimately displacing established market leaders, alliances, and the status quo. Historically, however, it’s been seen that as society becomes more educated, informed, and familiar with innovations such as e-mail, smartphones, and social networking, the acceptance and proven benefits begin to emerge as a result.  Similar to other industry shake-ups, the increasing introduction of robotics into the workplace has led to a common perception that careers within the manufacturing sector are shrinking, or quickly becoming obsolete. At a closer glance, however, the world of industrial robotics and automation reveals more opportunities than disadvantages; more reasons to be excited about pursuing manufacturing careers, and a rallying call for the upskilling of students and employees.

"At a closer glance, however, the world of industrial robotics and automation reveals more opportunities than disadvantages."

There is no denying the fact that industrial robots are revolutionizing manufacturing on a global scale. The ability to complete tasks in smarter, safer, faster, and more cost-effective ways has become a necessity for maintaining competitiveness in an industry that demands greater flexibility, shorter life-cycles, and is under increasing pressure to meet customer expectations.  With robots taking on more human capabilities, including sensing, object recognition, assembly, and packaging, among others, it is clear that the composition of the industrial workforce is indeed changing. Nevertheless, the conventional belief that companies are purchasing robots to replace people is not as clear-cut as it may appear. In fact, job opportunities within the manufacturing community as a whole are expanding across more industries due to the integration of robots.

Traditionally, robot-based manufacturing has been most prevalent within the automotive and metals sectors. However, as the cost of advanced robotics continues to decline and the range of applications broadens, more and more industries are beginning to implement and make use of automation techniques and processes.  For example, in 2005 69% of all industrial robot orders in North America were made by automotive component companies, whereas in 2014 this figure had been diluted to 56% due to the adoption of robots in other sectors. Today, other industries such as food and beverage, plastics, medical devices, and even high-tech companies are putting robots to work in an effort to achieve a competitive advantage and meet new manufacturing and production standards. As a result of more widespread robotic applications, the ever-growing expansion of robot use across these many sectors may appear detrimental to employment security. However, the introduction of ‘collaborative robots’ has actually spurred economic growth and the creation of job opportunities for many. 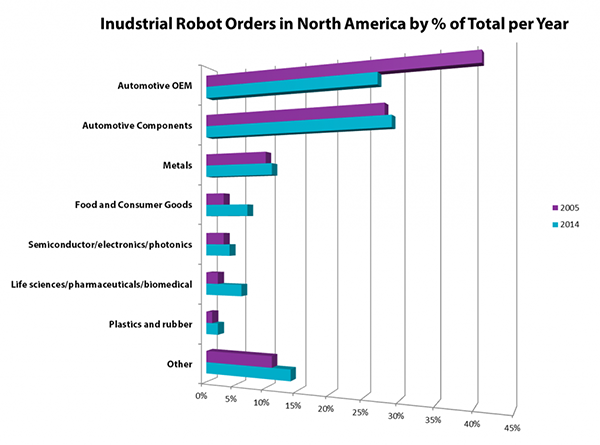 While robots have historically been used for onerous, dangerous, and repetitive tasks, the collaborative robot has enabled humans to work alongside their manufacturing counterparts through a wider range of applications from product testing, inspection, palletizing, simulation, and additive tasks among others. To combat the notion that automation threatens employment levels, companies are now using robots to expand and improve product quality while increasing productivity, which in turn has led to the hiring of more engineers, trainers, and salespeople. In fact, the generation of career opportunities in North America due to robotic manufacturing is not to be viewed in isolation nor as a rare case of economic stimulation, as one global study notes that robot-driven job creation could reach 1.5 million by the end of 2016. 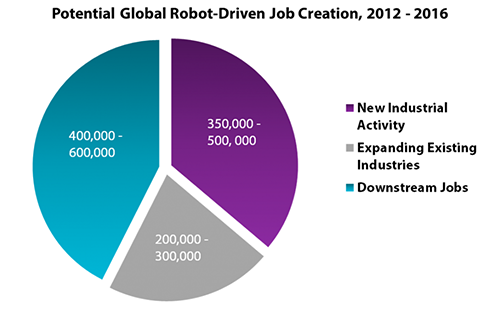 In addition to this trend of expanding employment opportunities, the collaboration between humans and robots in the workplace has also created a byproduct of high-paying and rewarding careers.  Robotic automation has changed the landscape of employment opportunities across the industrialized world as they enable companies to remain cost-competitive while continuing production in high-cost countries instead of outsourcing to lower-wage nations, otherwise known as reshoring.  In light of these changes to the manufacturing industry, organizational success is beginning to depend more on building a workforce that can exploit such technological advances. While the notion that robotic manufacturing as a job destroyer has been dispelled, current research has shown that there is now a new economic discrepancy between job skills and employment demand. In other words, manufacturers are facing challenges in finding workers with general manufacturing skills, as well as the talent to exploit such innovations.

"While the notion that robotic manufacturing as a job destroyer has been dispelled, current research has shown that there is now a new economic discrepancy between job skills and employment demand."

Thus, in a world where disruptive technologies and processes are constantly being introduced to the marketplace, it would seem evident that skill development is the answer to meeting and effectively working with such innovative equipment. There is no doubt that robots will continue to be a driving force within the manufacturing community, but through the implementation of collaborative robots, these changes to the employment arena are nothing to fear. Instead, proactive action can be taken now as the future of manufacturing careers will undoubtedly become more high-tech and demand an even greater understanding of automation. In effect, the introduction of robotics and automation is best combined with investments in training and development programs as this would help support the re-deployment and upskilling of students and staff members alike. This new robotic-heavy ecosystem of high-paying and rewarding jobs is untapped in many ways, making training and development programs more important than ever.

“The new hire: How a new generation of robots is transforming manufacturing.” PricewaterhouseCoopers LLP. September 2014. http://www.pwc.com/us/en/industrial-products/publications/next-manufacturing-robotics.html

US Winemakers Among Latest To Feel Squeeze Of Trade Tariffs