Through innovations in design, drive technology has taken a leap forward from mechanisms used since the 1950s. At the same time, design upgrades have allowed for smaller footprint, lighter weight, and higher torque densities. 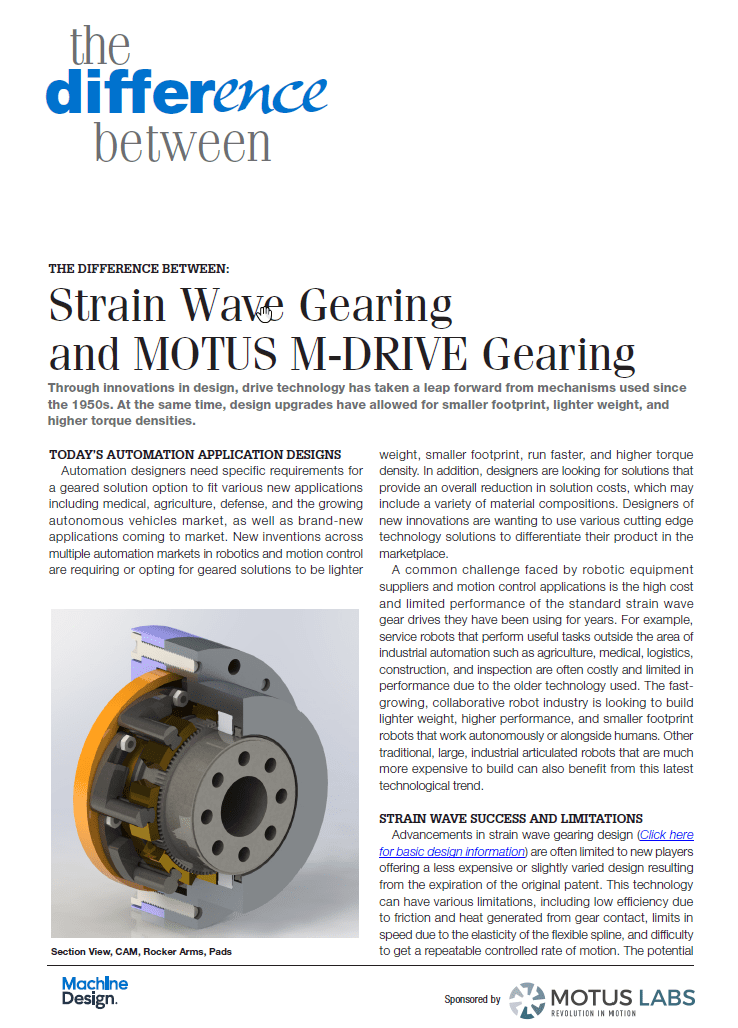 TODAY’S AUTOMATION APPLICATION DESIGNS
Automation designers need specific requirements for a geared solution option to fit various new applications including medical, agriculture, defense, and the growing autonomous vehicles market, as well as brand-new applications coming to market. New inventions across multiple automation markets in robotics and motion control are requiring or opting for geared solutions to be lighter weight, smaller footprint, run faster, and higher torque density. In addition, designers are looking for solutions that provide an overall reduction in solution costs, which may include a variety of material compositions. Designers of new innovations are wanting to use various cutting-edge technology solutions to differentiate their product in the marketplace.

A common challenge faced by robotic equipment suppliers and motion control applications is the high cost and limited performance of the standard strain wave gear drives they have been using for years. For example, service robots that perform useful tasks outside the area of industrial automation such as agriculture, medical, logistics, construction, and inspection are often costly and limited in performance due to the older technology used. The fast-growing, collaborative robot industry is looking to build lighter weight, higher performance, and smaller footprint robots that work autonomously or alongside humans. Other traditional, large, industrial articulated robots that are much more expensive to build can also benefit from this latest technological trend.

STRAIN WAVE SUCCESS AND LIMITATIONS
Advancements in strain wave gearing design are often limited to new players offering a less expensive or slightly varied design resulting from the expiration of the original patent. This technology can have various limitations, including low efficiency due to friction and heat generated from gear contact, limits in speed due to the elasticity of the flexible spline, and difficulty to get a repeatable controlled rate of motion. The potential for these limitations means that reliability can be a concern and can lead to the need for early replacement of the drive.

NEW APPROACH TO GEAR ARCHITECTURE
In the drive toward improving standard strain wave designs, Carlos Hoefken, CTO and Founder of Motus Labs, brought his knowledge as a robot systems integrator to the current strain wave drive concept. Frustrated with the high cost and limited specifications of current gear-drive
technology, Carlos was determined to develop a smarter solution and worked with the Motus Labs team that studied the functionality of human and non-human body movement to come up with their innovative gear design. The result is his unique, breakthrough precision transmission architecture that currently holds nine U.S. patents issued and additional U.S. and international patents pending.

M-DRIVE design has replaced the age-old brute-force gear teeth of standard strain wave drives. Utilizing a CAM-driven design, along with custom software tools, Motus Labs can precisely control multiple gear pads to not only provide outstanding torque density but also to eliminate backlash and minimize lost motion. This technology allows the use of a variety of materials, depending on specific needs for weight, cost, or material-specific applications. M-DRIVE technology enables high torque densities in a compact, lightweight package.

Unlike strain wave drives, the M-DRIVE does not rely on the rolling engagement of involute gearing; rather, the CAM-drive gear blocks provide up to 80% engagement of the output ring surface area, which distributes load stresses over a much larger surface area. An increase in load distribution enables an increase in torque density for a given unit size. 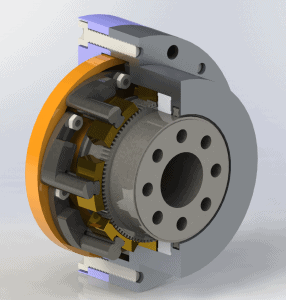 The angular transmission error of strain wave drives typically varies periodically, with the primary component at twice per input revolution. This creates a vibration at 2x the input frequency. Thus, in the case of strain wave drives, it is often necessary to use a larger drive to maintain the same load capability. This introduces additional weight and cost to the application.

Due to the patented technology implemented, the M-DRIVE technology does not exhibit a 2x torsional resonance like strain wave drives. The elasticity of the flexible spline inside a strain wave drive can introduce mechanical resonances and instabilities. The workaround for this is to use a larger drive size since it improves torsional stiffness. This again introduces unwanted weight and cost to the overall application it is used in.

NEW AUTOMATION APPLICATIONS
Advancements in technology applications require that all components within an automation system, including the drive mechanism, be evaluated and viewed in a discriminative light to ensure new applications are promoting innovative technologies. M-DRIVE technology delivers not only in precision but promises to provide higher torque density while maintaining the compact, lightweight structure demanded by customers.

Furthermore, through the ability to use various materials, the M-DRIVE can be used in a wide variety of unique applications where weight is a critical factor or where non-magnetic materials are necessary, such as those found in the medical industry (MRI machines for one) and the semiconductor industry (for precision handling of sensitive semiconductor components). Technology-enabled reductions in the need for precision machining lowers the cost of manufacturing, which translates into cost savings for the user.

Other applications that would benefit from M-DRIVE technology include aerospace and defense for satellites, UAVs, and antenna motion control; automation in everything from packaging to pick-and-place operations; construction for 3D printing of large structures; climbing robots for inspection; and demolition equipment. Increased reliability, lightweight, smaller footprint and high precision are critical to these and many other applications across all industries.

SETTING PACE FOR SMART MANUFACTURING
The M-DRIVE was designed with Industry 4.0 in mind. AI-driven robots and automation applications require smart actuators that require smart gears. The new architecture positions Motus Labs as an enabling technology leader for new applications in adaptive robotics and motion control as the industry shifts from traditional automation to smart manufacturing.