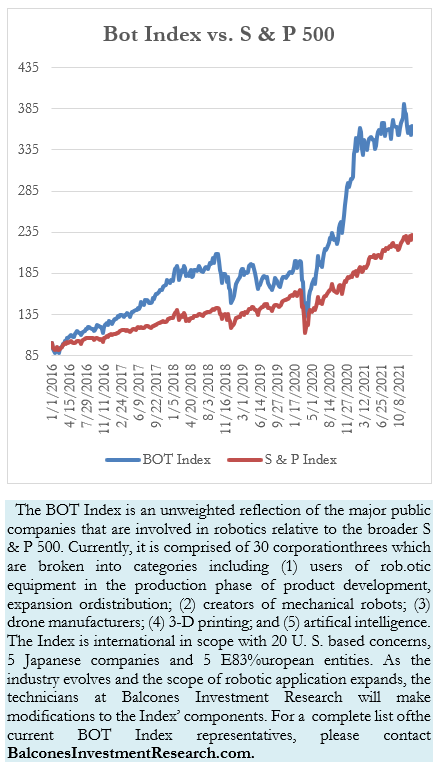 After six consecutive weeks of underperformance to the broad market, the Bot Index reversed course and gained nearly 3% last week while the S & P 500 jumped 2.28%. The bots were paced by double digit increases by both Intuitive Surgical and NVIDIA Corp. Intuitive Surgical’s 16.76% return was prompted by a Motley Fool article which was entitled, “Could Intuitive Surgical Stock Hit $500 in 2022?” With the stock closing the abbreviated trading week of $393.94, the annual potential would represent a gain of over 26%.

NVIDIA’s 14.43% rise was attributed to comments made on Jim Cramer’s Mad Money Recap of 2021 of his most admired companies which included NVIDIA and Tesla. While not into double digit territory, Tesla increased 6.61%, probably as a result of the same feature.

With the closing days to make for gain sales from a tax perspective, it is likely that the selling pressure by Elon Musk will no longer serve as the sword of Damocles held over the stock for the past few weeks.

There were only four stocks in negative territory for the week, and of them, only two were domestic names, each of which lost only one-half percent.

While in our Texas office this week, we spotted an article in the Houston Chronicle regarding the utilization of robots on drill rigs. It’s been long said the robots are perfect for the replacement of humans that daily tackle the dirty, dangerous or demeaning jobs. Certainly, rig work is both dirty and dangerous and could be well suited for robotic activities.

The Chronicle article featured a recently successful drilling on a Nabors Industries rig in the Permian Basin completely absent human labor. Prompted by the covid pandemic’s impact upon the skilled roughneck labor supply, the company has adopted a number of robotic applications in its onshore drilling. The use of robotics in a variety of extraction functions on offshsore platforms has been around for the past decade and is likely to see expansion with the proven success of Nabors’s onshore results . Not only does the application of robots provide a safer alternative, the incremental speed and savings are noteworthy. The article cited, “technological transformation that has taken place in many industries, including farming, manufacturing, and banking. Big Oil, which has always relied on new technologies to extract more fossil fuels from the ground, is the latest to embrace robotics and automation.” 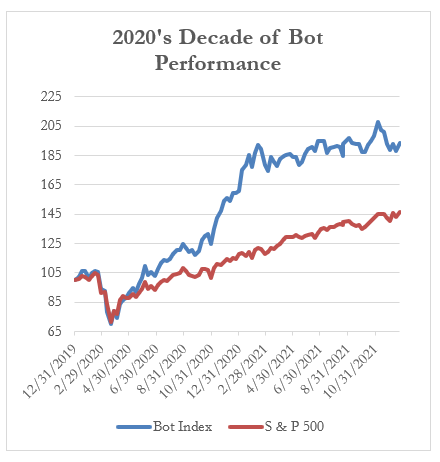