Since 1986 MATRIX VISION has been an innovative and trustworthy partner in the machine vision market for customers all over the world.

Whereas many machine vision applications usually use constant distance (and constant lighting), there has been a trend to use GigE Vision and USB3 Vision cameras also e.g. in outdoor applications such as traffic monitoring or security or sports with varying object distances. This enforces the need to adjust the focus.

The advantage of this solution is that it requires only one programming interface from the host PC to the camera inclusive optics, saving the separate USB port to communicate with the lens otherwise. 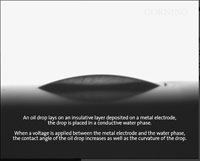 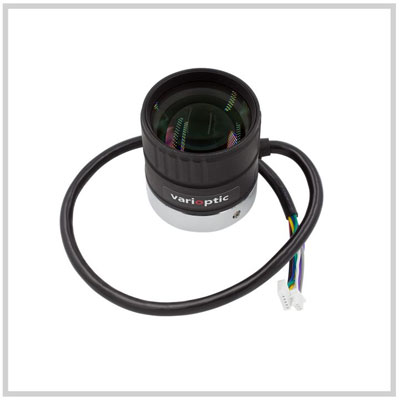 Why use liquid lenses?

It is quite common to change the focus by means of motors. This offers the possibility to remotely manipulate these settings by command switches or via programmatic routines.

Disadvantages of this solution are it is quite slow in operation, bulky in size and limited in life time due to aging.

Recently there has been research and success in building electro wetting liquid lenses which can change their curvature based on applied voltages. One such company is Varioptic now a division of Corning. The left image (both by Varioptic) shows the working principle, the right shows one example in the form of a C-mount lens containing one liquid lens element.

These liquid lenses have been tested over 100 million of cycles with no degradation and they are very robust with respect to vibration and suitable for applications requiring quick changes in focus. 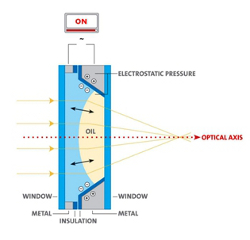 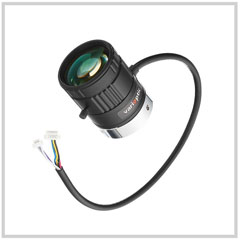 How to connect a liquid lens to a camera?

The liquid lens requires the RS232 port in the camera plus a DC power from 5 to 24 Volt.

This is supported since firmware 2.24.975.0 for mvBlueCOUGAR-X (incl. POE) and XD and mvBlueFOX3 camera families.

Pinning of the Hirose is shown in the table below on the left and connection to be made on the right.

The lens uses the power supply of the camera. This means that the POE models of the mvBlueCOUGAR-X and USB 3.0 camera mvBlueFOX3 have to use Hirose power instead of bus power. 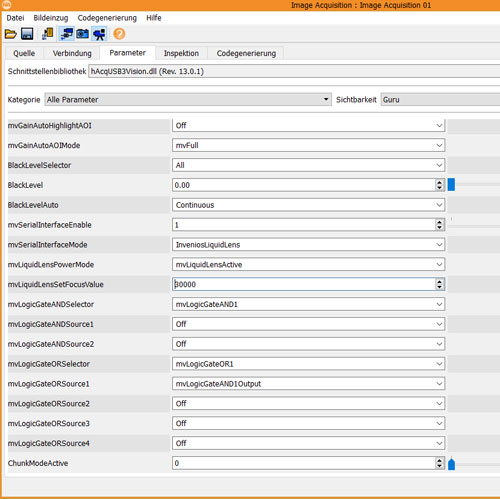 Select usage of RS232 port and use InveniosLiquidLens for interface mode. In active power mode the settings of focus value have immediate effect. Use power mode StandBy mode to conserve power. The lens can change to any focus within a few milliseconds which is usually much faster than the typical frame rates of cameras.

The SaveFocusValue can be used to set the lens to a defined focus after power up of the camera. This is stored in the EEPROM of the lens itself.

How to control lens via 3rd party libraries or APIs

The properties for mv RS232 control are MATRIX VISION specific but appear in the camera’s XML-file according to GigE Vision standards and SFNC (standard feature naming convention) thanks to the standard. This makes it possible to use the features from third party applications or programs without problems, as shown with HALCON’s image acquisition.

The following is a list of usable lenses. There are two different lenses available at the time of writing with C-mount Interface. Option R2 is to be used which means RS232 interface with 12 V operations.

All mvBlueFOX3 cameras and all mvBlueCOUGAR-X(D) cameras with sensor diagonals up to 2/3”.

New Machine Vision Tech Proves Its Value at the Border

uEye CP cameras from IDS can capture even the smallest details