Shape Process Automation has been providing robotic solutions since the mid 1980’s and is a globally recognized integrator of robotic systems. We design & build flexible solutions from material handling and assembly applications to advanced materials cutting with robotic laser, router, knife and waterjet processes. We proudly serve leading industrial manufacturers within the automotive, food & beverage, marine, appliance & consumer goods, aerospace, and other general industries around the globe. We are committed to improving their quality, productivity and competitiveness. With over 6,000 installations, in more than 70 countries, we use our expertise to help you choose the right process for your application. Whether your needs are met with one of our standard solutions or one that is custom-engineered to order, our dedicated team of industry experts bring innovation and state-of-the-art technology to every challenge. 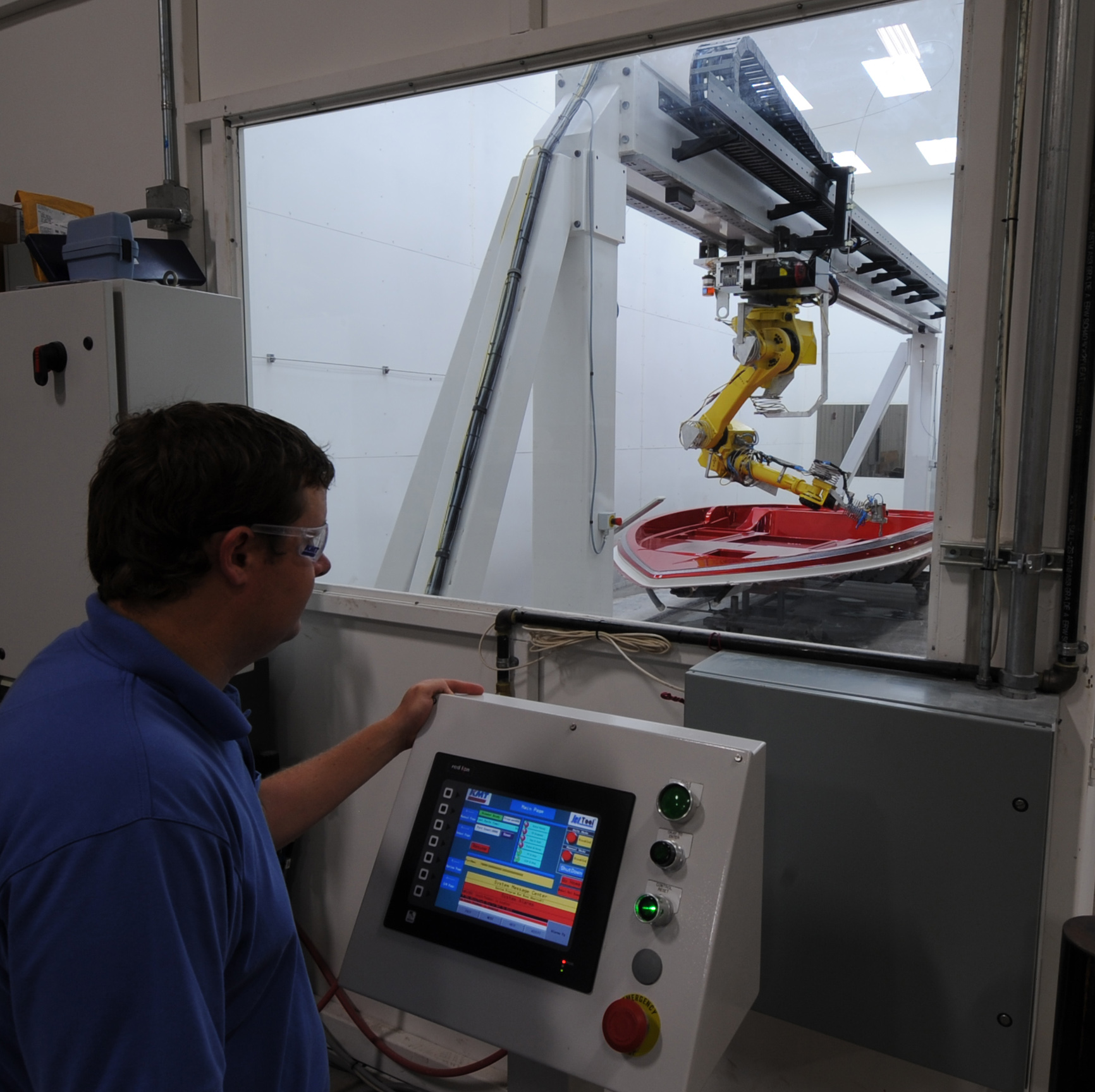 Ranger Boats, located in , is a world-renowned manufacturer of recreational and tournament bass fishing boats.

Ranger approached KMT for a robotic trimming system that would produce more parts per hour than their current manual trimming method. The manual method took four operators (each dressed in head-to-toe protective gear) 25 minutes each to trim a 21-foot long fiberglass boat deck using routers, saws and drills. This time consuming and labor-intensive process was a production limiting operation.

Ranger’s goal was to produce 25 boats per day in an 8-hour continuous flow operation. In order to achieve this, they needed a reliable automated solution.

KMT Robotic Solutions designed and developed a custom JetTool® robotic waterjet cutting system with an overhead rail-mounted AccuTrim® WJ- 110 robot equipped to withstand exposure to severe environments. The trimming process starts once the boat deck, mounted on a specially designed fixture cart, is rolled into the trimming area and locked into place. The operator then scans a barcode that signals the robot to use the corresponding trimming program and hits the "Cycle Start" button.

Because the fiberglass deck will vary slightly in size and thickness, KMT’s AccuFind device is then used to determine the exact dimensions and location of the deck and automatically offsets the robot trimming program to match the new location. The robot then trims the deck using high-pressure water at 60,000 psi. When trimming is complete, the operator is notified and the cart and deck are manually rolled out of the trimming cell.

The system also reduced money spent on perishable tooling. According to Engineering Project Manager Lance Newton, "The implementation of the robot has eliminated the need for numerous fiberglass cutting jigs that take many hours to make and maintain throughout the life cycle of the boat. We will save approximately $100,000 per year just in perishable tooling."

More than a dozen boat models are currently being trimmed in the cell, which relates to approximately 85 percent of production. In the future, consoles and other small parts may also be trimmed on the JetTool system, said. Ranger plans to optimize its manufacturing operations even further by eliminating manual trimming in the grinding booth and offering those employees the opportunity to have a more desirable job in the plant.

"As our processes become leaner, not only with the robotic trimming system but with other processes as well, it will help offset the rising cost of raw materials," said. "This results in decreased manufacturing costs for Ranger, which can ultimately result in a more stable cost to our dealers and customers from year to year."