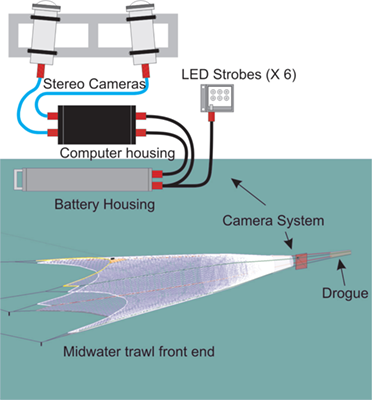 The Alaska Fisheries Science Center is the research branch of the National Oceanic and Atmospheric Administration’s National Marine Fisheries Service responsible for research on living marine resources in the coastal oceans off Alaska and parts of the West Coast of the United States. This region of nearly 3 million square miles includes the North Pacific Ocean and the East Bering Sea which support some of the most important commercial fisheries in the world.

These waters are also home to the largest marine mammal populations in the nation.

The conservation and management of fish stocks relies heavily on fish-count surveys. Traditionally, this has been done through the use of fishing trawlers set-up to do acoustic or bottom trawling which cast enormous nets into the sea to capture as many fish as possible over a specified area. These fish are then brought on-board and manually counted to develop the trawl survey. This methodology suffers from a number of shortcomings:

As a result, NOAA’s (National Oceanic and Atmospheric Administration) and its National Marine Fisheries Service (NMFS) has been working for a number of years on a camera-based trawl (CAM-Trawl) technology to bring the power of image capture and facial recognition (loosely termed, “Fishal Recognition”) technology to best address the problem. Early generations of this CAM-Trawl system used the lengthy process of image capturing, storing images, and then removing the storage media for image analysis at some later time back at the lab.

In the latest generation of the CAM-Trawl system developed by the Fish Management Acquisition (FMA) Program, ADL Embedded Solutions (ADLES), Inc. worked closely with the NMFS Alaska Fisheries Science Center to make key improvements to the computer portion of the FMA CAM-Trawl system.

Improvements to the system included:

The resulting FMA computer solution from ADL has helped achieve all the stated goals for this project. Namely, real-time fish count data analysis capability for NOAA marine researchers to aid in their fish conservation efforts is now a reality.

The new system includes an ADL main control computer shown on the left and an ADLES image acquisition computer on the above right.

The ADL image acquisition computer (Vision Box) is responsible for:

The ADLES control computer typically resides in the wheelhouse. It will steadily monitor a number of external sensors including geo data, time, pressure sensors, RFID tag readings and will orchestrate one or more Vision Boxes based on sensor input. Remote power on/off, clock syncing, start/stop image acquisition, etc. is all dictated by the ADLES control computer in a one-to-many relationship.

The results for the new FMA system have been very positive after experimental trawl surveys in 2016. Work is now underway to standardize the key components of the new system as a means of promoting the adoption of this real-time “Fishal Recognition” FMA system on many more surveys in the near future.

The Rise of ARM Platform