A leading global automobile manufacturer assembles 120,000 vehicles annually—one to two cars per minute—at a plant in China. At the start of the assembly process, large vehicle parts must be placed on the production line. Originally, parts were moved into production by equipment that was operated manually, which was a cumbersome, time-consuming process that held the potential for risk to the operator as well as to the part itself if it wasn’t moved correctly.

“The manufacturer worked with an international provider of automation technologies to automate this important step of the production process, with the goal of increasing productivity and reducing costs. The company designed robotic grippers to lift the vehicle parts onto the assembly line automatically,” explains Tony Zhu, general manager of systems integrator Check (Shanghai) Automation System Co., Ltd. “Challenges still persisted, however, because if the robotic gripper didn’t attach to a part in the right place, usually at designated marks, the part could tilt and be suspended from the robotic arm, or be dropped off the line. Identifying the right position at which to grab the part was so critical that the manufacturer considered using vision technology to locate the gripper arms accurately.” 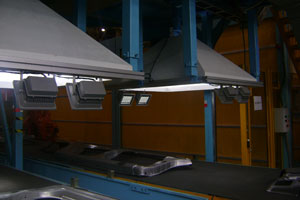 Achieving the Right Resolution
The automobile manufacturer tested several vision systems, but finding a solution that offered the high resolution and image quality needed was difficult. In response, Tony Zhu and the team at Check Automation System Company proposed a Teledyne DALSA GEVA 1000 vision system with Sherlock software, as well as Genie high-resolution 2MB 1600x1200 cameras. “This manufacturing facility operates a number of assembly lines,” says Steve Zhu, Teledyne DALSA’s director of Sales for Asia. “Interference from other lines impacted the quality of the images generated by other vision systems, but the high resolution available with the GEVA 1000 vision system from Teledyne DALSA ensured that images captured were clear and accurate.”

Clarity and accuracy are critical to the success of the vision application, which has now been deployed on two assembly lines in the plant. The GEVA 1000 with two Genie cameras processes images from across these two distinct assembly lines simultaneously. Triggered independently, the two Genie cameras take images at a rate of 15 frames per second, capturing multiple positions at the same time, first to identify the type of vehicle part being moved and then to ensure that the four robotic arms will grab the part in the correct locations. The flexibility to accommodate these two different types of inspections simultaneously is unique to the GEVA 1000 vision system.

The GEVA 1000 supports the asynchronous acquisition of images with Sherlock software, which uses its Search Tool—one of the quickest and most accurate pattern-matching tools in the industry—to analyze the images to identify the coordinates of all positions and ensure alignment. The Sherlock software also shares the images with the manufacturer’s database, which facilitates communication between the vision system 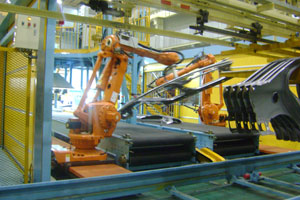 and the facility’s existing technology, streamlining the production process and ensuring quality control.

If the positioning is accurate, the GEVA 1000 communicates with the robotic arms via built-in I/O and RSS232 industrial standard communications protocol to guide the robotic arms to lift the part onto the assembly line. “The speed at which images are taken and processed has helped the manufacturer automate the assembly line, improve productivity, and reduce costs overall. Before implementing vision technology, they were able to grip one vehicle part every five to six minutes. With the robotic gripper equipped with vision guidance, they can grip a part every two minutes, and because they can do so across two independent production lines simultaneously, they’re increasing productivity by about six times overall.” continues Tony Zhu. “The implementation of a vision system has also reduced the potential for error significantly, protecting the safety of operators and eliminating the risk of damage to the vehicle part being processed. The customer reports a high rate of satisfaction with the solution, which is currently in use on two assembly lines.”

The Benefits of the Right Point of View
“The manufacturer also identified a number of key advantages of the Teledyne DALSA GEVA 1000 vision system,” notes Steve Zhu. “First, unlike other vision software solutions they had tried, Sherlock software provides unmatched calibration capabilities to minimize the barrel distortion common with such a large object. Effective calibration is integral to the solution, because without it, it would be impossible to ensure accurate alignment of the robotic arms and the designated positions on the vehicle part. Calibration capabilities are complemented by robust alignment algorithm parameters, which help ensure that the marks on the part can be seen clearly so that lifting positions are located accurately.” 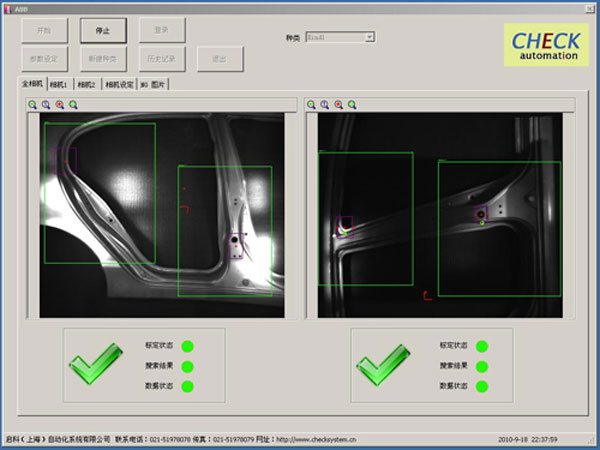 The manufacturer also highlighted how easy the GEVA 1000 vision system is to use as an important advantage. “With Sherlock’s GUI, the customer can do virtually everything themselves, from operation to maintenance to training. It also ensures that the solution will scale to meet future demands,” Steve Zhu continues. “They’ve told us that this level of simplicity and adaptability was one of the primary reasons they chose the GEVA 1000 from Teledyne DALSA and not another solution.”

Of course, if the manufacturerdoes have a problem, the teams from Check Automation System Company and Teledyne DALSA are available to assist. “The level of support the manufacturer received during design and implementation and since the Teledyne DALSA vision system has been in use is another element they’ve cited as important to their high level of satisfaction,” Tony Zhu concludes. “The GEVA 1000 vision system has performed flawlessly and become critical to the high level of productivity and accuracy the manufacturing plant is now able to achieve, but even with such an easy-to-use solution, it is important to know that support is available if needed.”