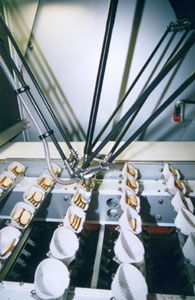 The right choice is being made every day by more and more connoisseurs of fine taste throughout the world, when they opt for a superior delicacy from Pepperidge Farm - a division of Campbell Soup, Inc.

Pepperidge Farm also made the right choice when deciding to automate the manufacturing and packaging process of their traditional products 'Milano,' 'Brussels' and 'Lido.' The automation begun in 1998 and has recently been completed with the commissioning of a new SIG system.

The Pepperidge factory in Denver is now the proud owner of one of the most modern cookie production systems in the world. Everything is automated - from the oven to the packaging and everything in between - including product handling, tray filling, bag manufacture and filling. SIG Pack, with its tried and tested know-how in the field of robotics and system construction, was selected as the supplier. The new tailor-made system was developed and successfully commissioned in close cooperation with specialists from Pepperidge.

The Problem:
Automation of the packaging process for cookie production at Pepperidge Farm. Because of a complicated stacking process for the cookies, limited space and high quality standards, only a high-speed, high-performance system with minimal footprint would work, which made for initial resistance to the use of robots.

The Solution:
Robotic infeeding of the two-layer cookies - upright and lying flat in the same tray - was first checked with a series of tests in an initial stage of the project. There were doubts about the feasibility of implementing such a concept. SIG Pack however was able to come up with a proposal that convinced even the most ardent of critics at Pepperidge.

Due to large amounts of space needed for the paper tray carrier, the robot arrangement was selected to allow the entire work area to be processed. This facilitated a high average capacity of more than 95 ppm per robot across a work area of just 1000 mm in diameter.

The high requirements on quality were also satisfied. At the entrance point, the system ensures that only two-layer cookies are allowed into the packaging process. There is also a guarantee that all the paper trays are always filled and the cookies are cleared away from the belt. All the robots have been fitted with Ethernet connections allowing them to exchange data with one another online.

In the production process, one half of the two-layer cookie is taken directly from the cooling belt and then coated on one side with chocolate. It is then turned with the coated side facing up. On the 'capping line' the two halves are then accurately joined together by 12 DELTA robots at a speed of more than 1300 pieces/min. The possibility of efficiently using data concerning the finished products and the products still to be processed throughout the entire process increases the overall efficiency. The line is independent of size or shape. Changes can be made in minutes at the push of a button on the central control panel.

Four standing and one flat is the somewhat unusual arrangement of cookies in the paper trays. 14 DELTA robots pick up all the products and carefully lay them into the paper trays that are fed in row by row. An integrated image processing system ensures that the robots only place perfect products into the trays.

The attractive sales packaging is manufactured on a proven SIGPF mandrel wheel machine: interior bag of metallized OPP, exterior bag of paper and glued. As additional protection, card inserts are placed on two sides, between the interior and exterior bags.

Over 180,000 packages leave the packaging system in an 8-hour shift. Via a series of plate chains, the filled trays are fed into the SIGPR filling and sealing machines, where two bags are simultaneously filled with three paper trays each. The trays are carefully inserted into the bags. To protect the cookies, a card insert is placed on top of every tray. The bags are then sealed with double over-folds and secured with hot melt.

Efficiency of almost 100% has been achieved. After several months of the project, the system recently passed official acceptance at the Denver factory. During this time and in accordance with the customer's wishes, more than half a million paper trays were filled with 5 different types of cookie. At 99.3 % the guaranteed performance of 98. 5% in continuous operation was even exceeded!

A true 'homerun' is how the new SIG system has been evaluated by the customer. With the automation of its packaging process, Pepperidge Farm has taken a forward-thinking step and has set the course for the efficient packaging of its superior products. SIG Pack is proud to have been involved.