Production boost of 20% reported by Amgraph on food packages

At 30 years old and approximately 75-feet long, the Black-Clawson two station Extrusion Laminator dominates Amgraph’s (Versaille, Conn.) production floor like a dinosaur lining up at a bone yard. As customer requirements surpassed the capabilities of this aging behemoth, Amgraph, which supplies flexible packaging solutions for the food industry, had several choices. It could spend millions on a new machine, settle for lower productivity and product diversity or retrofit the equipment for the 21st century. Instead of scrapping their investment and spending millions on new machines to meet new product, productivity, and customer requirements, Amgraph’s Senior Management decided to prepare their equipment for the needs of tomorrow by upgrading the analog control system to high-efficiency Siemens motors, Sinamics S120 digital drives and newer control systems.

As a result of the retrofit, Amgraph can now produce a wider variety of coated plastic and foil flexible food packages, cut material expenditures and improve throughput, while boosting productivity. 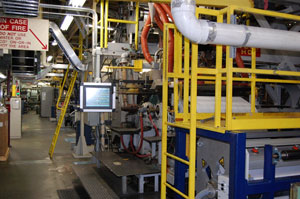 better, and increase throughput by 20 percent or more.

“Initially, the machine had four different motors with analog drives and controls, each with their own wiring harness and relay logic, which really made the machines a challenge to maintain,” explained Circonix Vice President of Engineering Andrew Alaya. “Only one of the sections was capable of tension control, which forced Amgraph to operate the extrusion machine in draw mode. This meant that the machine could only handle certain types of coatings without breaking the web and going down. Improving that uptime through better tension control was the main goal of the project.”

Circonix engineers decided to retrofit the Extruder’s four existing analog drives with Siemens motors and Sinamics S120 drives, while adding four load cells inline, and a new Fulton Machinery dancer to the machine’s two unwind spindles.  Also, two Vetaphone treaters were added inline as part of the retrofit.  These effectively eliminated the need for the primer coater, and served as pull stations for the machine, which were driven by Siemens motors and drives. These modifications allowed the machine to work in closed-loop tension control mode. By changing values on the HMI and PLC, Amgraph’s Production Manager, David Rand, could now precisely control the speed and thickness of the web, turn various systems such as treaters, laminators, and tension control systems on or off, and apply either thinner coatings to package materials without worrying about additional web breaks and downtime, or thicker coatings to meet special customer needs. 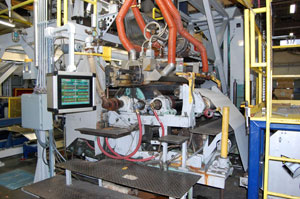 “Now that we have more control of the system, we’re looking at replacing thicker films that we used to purchase from other vendors with extruded materials we make ourselves, which saves us money,” says Amgraph’s Rand. “Our initial trials have been successful.”

The new motors, upgraded digital drives and new controls also increased the extrusion machine’s uptime, throughput and productivity.  The high bandwidth of the Sinamics S120 digital drives allows for improved speed regulation and faster response, both of which are key to improving tension control.  Amgraph set aggressive goals of 95 percent uptime for the retrofitted extrusion machine. “We’ve had some success since the machine was installed in January,” says Amgraph’s Rand. “We spent a few months fine-tuning operations, [but] recently, we’re starting to see [uptime] benefits. We should have some firm numbers in the next few months.”

In addition to increasing uptime and the number of products the machine can handle, Rand says the retrofit has increased throughput by up to 20 percent, depending on the product line. “We’ve definitely increased production 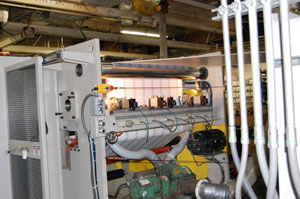 speeds,” he said. “We’re happy where we are now, but we still have opportunities to improve throughput.”

On time, Within Budget

Customers may also want to use specific equipment providers for certain systems. In this case, Amgraph was familiar with third-party HMI and PLC technology, which meant Circonix needed to interface the Sinamics S120 drives with third-party systems. However, thanks to Circonix’s close partnership with Siemens as an official Siemens Solutions Provider, Siemens’ STARTER drive engineering/commissioning software and the easy integration of the Sinamics S120 drives using the electronic name plate capabilities of Drive-Cliq for the motors and drive components, the project was delivered to Amgraph on time and within budget.

“We used Profibus to tie the drives together and an SST module in the PLC to talk to the Siemens drives,” Alaya explains. “It was easy to meet Amgraph’s development schedule. With Siemens DC bus line up, all the drives fit in a single cabinet that was smaller than the space of one of the previous motor control systems. We were able to eliminate the wiring mess and relay logic that came with the older analog controls, which significantly simplified maintenance and troubleshooting for the customer while improving performance and uptime.”

Circonix started engineering development for the system in July of 2008, and just six months later, installed and commissioned the retrofits.

“We gave them a pretty intense schedule,” says Amgraph’s Rand. “What’s remarkable about this project is that it was done on-time. We have some machines that came in before we did this project and they’re still not up and running.”