As a part of forward-thinking environmental legislation, the Norwegian Parliament resolved in 2018 to outlaw harmful emissions from the ferries and cruisers operating in its fjords by no later than 2026. This covers both CO2 and NOx gases as well as noise pollution on the water.

The response from local shipping companies and ferry operators has been to dramatically accelerate the development and introduction of electrical propulsion systems. And the performance figures of Norway’s first all-electric ferry to enter service are to say the least more than impressive.

The world’s first fully battery-powered ferry, the MF Ampere operates between the ports of Lavik and Oppedal, where shore-based charging stations recharge its batteries. Compared to diesel-powered alternatives, a 95% reduction in emissions and an 80% reduction in operating cost have been claimed for the vessel. An attractive proposition for ferry fleets worldwide. 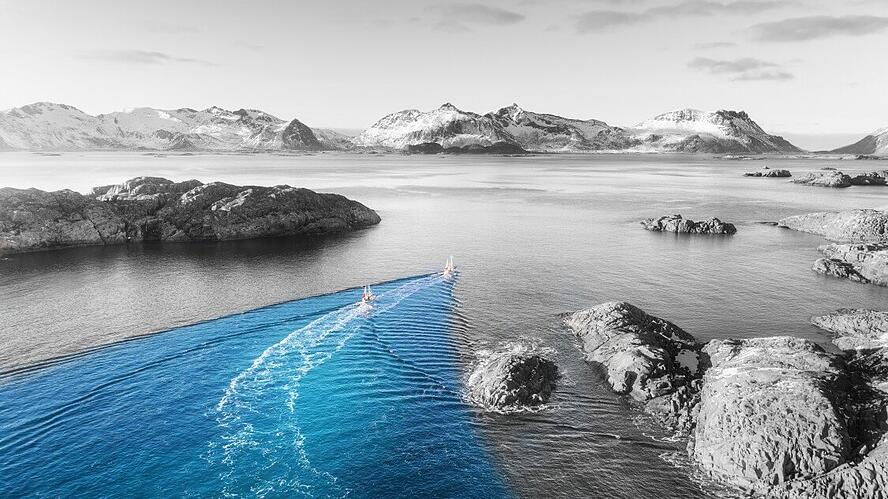 Traveling relatively short distances and staying quay-side at the same ports for long periods of time, car and passenger ferries have proven to provide an ideal place to begin the inexorable shift from traditional diesel to battery and hybrid diesel-electric power in the global maritime transport sector.

A critical enabler in this radical transformation is though the availability of the right types of batteries, in the right kinds of volumes to power the new all-electric and hybrid powertrains.

In opening a flexible, highly automated battery factory in Trondheim, Norway, Siemens has invested NOK 100 million to help address the future demand. It will develop and manufacture energy storage solutions for both marine and offshore oil and gas applications.

As well as car and passenger ferries of course, there are thousands of fishing boats, cruisers, multi-purpose vessels and offshore units that can also benefit from full or part electrification. Demand for marine battery sets, and the production capacity to support it, is therefore expected to be high and set to rise exponentially.

Head of Siemens’ offshore and marine center in Trondheim, Torstein Sole-Gärtner said, “All car and passenger ferries in Norway will ultimately rely on some form of energy storage solution, and we estimate that even by 2020, there’ll be around 60 hybrid or all-battery powered ferries operating here.”

He continued, “Our expectation though is that the battery and electric propulsion product that we develop and manufacture in volume at our new plant will help drive similar technological progress in all kinds of marine sectors around the world.”

And Siemens expects a doubling of the global marine battery market by 2024 and predicts that nearly 80% of all new ships up to 150m in length will be equipped with batteries in either all-battery or hybrid diesel-electric configurations.

To be able to keep pace with future demand the new Trondheim production line systems needed to be as efficient and flexible as possible. The number of people involved hands-on in the production process would need to be minimized, while the amount of robotization needed to be maximized.

Handling battery component parts in the production line’s depalletizing section presented a particular set of challenges, as Pedersen explained, “Unlike the other production cells, the first cell needed to be able to automatically handle a wide and unpredictable range of components – battery cells, frames, connectors and so on...”

“The handling of so many different kinds of incoming goods, arriving randomly placed on palettes, on cardboard trays, and in plastic blister packs for example, and to do it at some speed can be a tricky task to automate.”

Siemens’ Trondheim maritime battery production line is equipped with eight independently configurable robot cells and seven automatic guided vehicles (AGVs) for handling inter-cell logistics. Designed and engineered by Intek over a 12-month period, the line handles everything automatically, from the initial picking of component parts through to final battery testing and documentation.

Pedersen explains the rationale, “By harnessing the Zivid One camera’s high-quality 3D point cloud we were able to easily pinpoint the outline of the pallet or tray, very accurately determine the outer dimensions of the component within, and then pick-and-place accordingly with the highest degree of accuracy. And being able to rely on a single camera snapshot meant it was very fast too.”

“By taking this more pragmatic approach we could resolve the issue of random component alignment without the need for any mechanical ‘steering’ systems or operator intervention to straighten up the components and shift them to predefined positions. What’s more, it also avoided the need for intensive programming of complex component CAD files. It’s a very flexible and reliable solution as a result.”

As well as ensuring a reliable ‘pick’, the Zivid One camera-based machine vision system also ensures a highly accurate ‘place’, a performance criterion of vital importance to the efficiency of the interconnected production cells as Pedersen elaborates:

“Because the robot arm is automatically stacking component parts onto a relatively small AGV it’s essential that the system takes into account distribution of load – the AGV needs to stay perfectly balanced in transit. Furthermore, when the AGV arrives at its destination production cell, the component parts need to be picked by another robot from predefined positions. And so accurate component placement onto the AGV was also essential.” 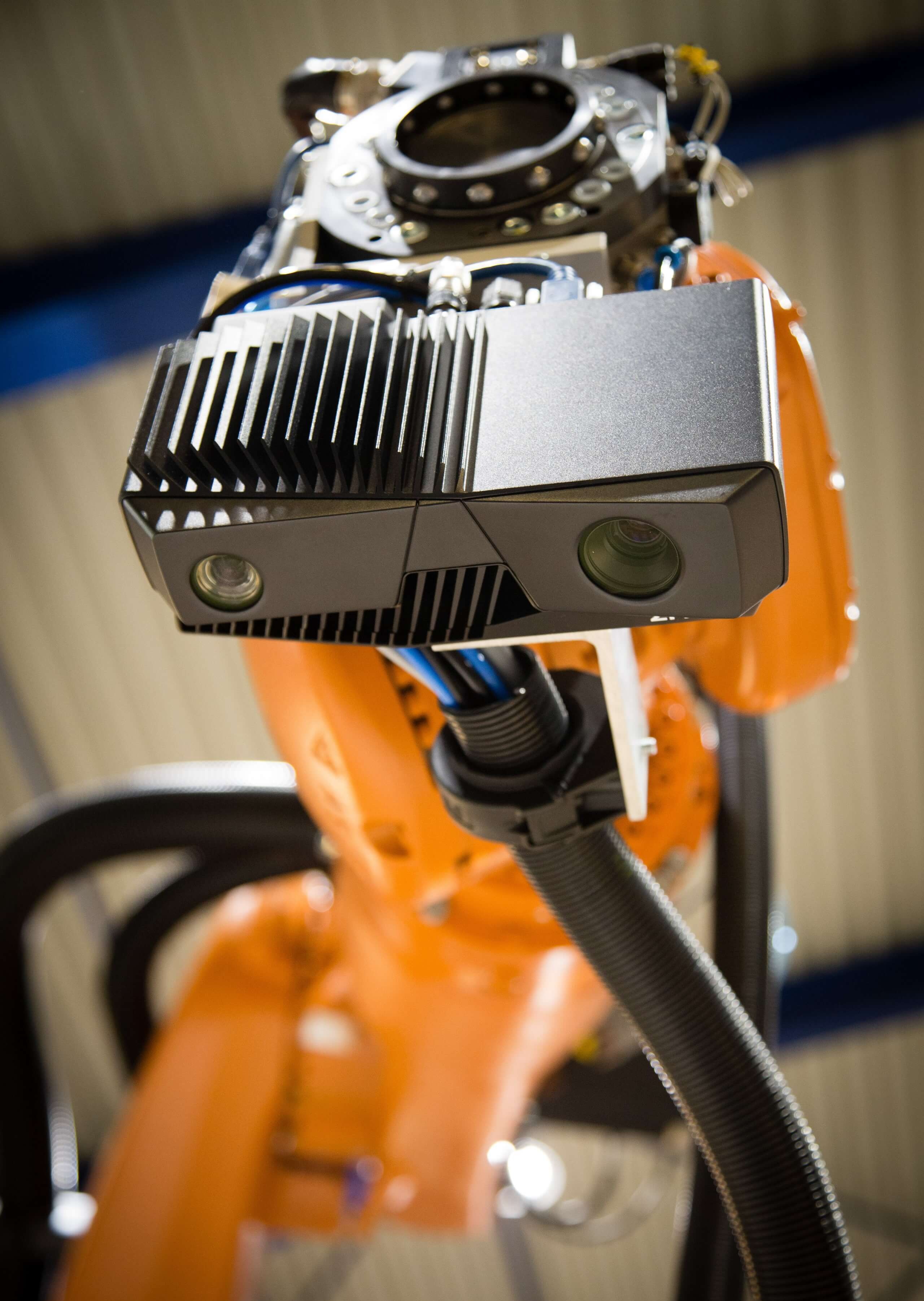 The advanced cellular nature of Siemens’ maritime battery production line enables it to flex its capabilities and increase its production capacity in response to the expected upsurge in worldwide market demand and rapid technological developments. Battery design and production is more easily tailored to match a particular vessel’s function and duty cycle.

By harnessing state-of-the-art machine vision, robotics and AGVs the Trondheim production line has achieved the highest possible level of automation, requiring only three people to work in the production area. It makes it possible to produce sustainable energy solutions more efficiently and cost-effectively.

Of particular importance, the specific use of Zivid’s 3D machine vision camera in the component depalletizing cell has played a major role in assuring the necessary high production throughput. The camera’s high-quality color 3D point cloud enables the robot arm to accommodate changes in the product without the need for mechanical system modifications or intensive software redevelopment.

With its highly-efficient, end-to-end automated production line Siemens is expected to be able to supply batteries for 150-200 ferries annually, equating to a battery module capacity in the order of 400 MWh. The factory can produce the battery modules needed for an all-electric ferry in less than four days.

The positive environmental impact of the switch away from diesel-powered vessels towards all-battery or hybrid-powered vessels cannot be underestimated. Reductions in CO2 and NOx gas emissions and water-borne noise pollution will be felt globally as well as locally. Emission-free, near-silent maritime operations are a worthy goal to aim for.