Many manufacturers are struggling to keep their production efficient while at the same time responsive to changing market needs. Producers in the dairy industry are facing the same challenges. Leading dairy producers like JSC Savushkin Product are turning to digital manufacturing and Industry 4.0 technologies to help them reduce time to market and accelerate the implementation of process improvement projects. In this case study, we’ll show you how Savushkin, with the help of their partner Concern R-Pro, used Visual Components to streamline robot programming and reduce the cycle time of a mixing and packaging process from 2 minutes to 2 seconds.

Like many large producers in this space, Savushkin is constantly looking at how they can use technology to modernize their operations. A recent search for manufacturing experts to help with an optimization and automation project led them to Concern R-Pro, a Russian-based IT consultant and reseller of Visual Components in Russia and Belarus.

“We started our cooperation with JSC Savushkin Product when they were looking for a tool for 3D modeling and offline programming for robots,” explains Victoria Litun, Concern R-Pro’s Chief Operating Officer. “They were looking for a partner who could help them to create a competence center for digital production and Industry 4.0.”

They were looking for a partner who could help them to create a competence center for digital production and Industry 4.0.

The project with Savushkin involved work on 2 robot cells.

For Cell 1, Savushkin needed assistance with generating the robot program for a recently installed Kawasaki robot in a palletizing cell. The cell consisted of two incoming conveyors and a pick-and-place robot; and was used to pack and palletize boxes of yogurts for Savushkin’s big box retail customers. 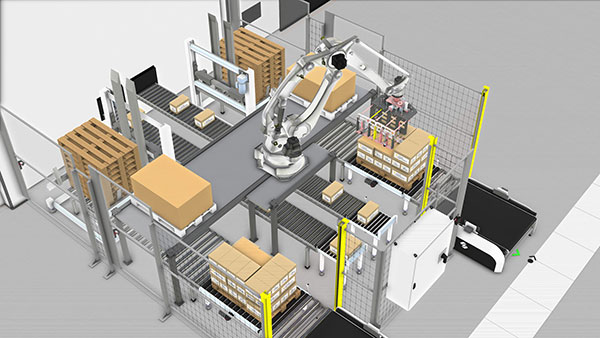 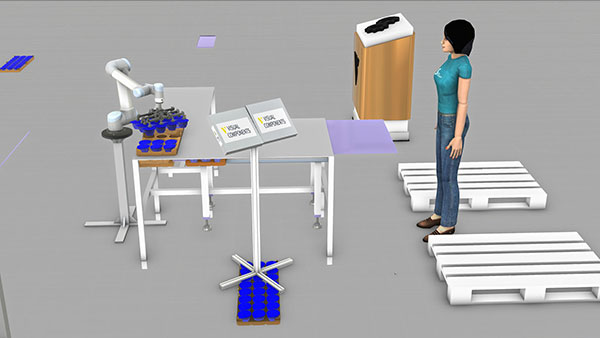 “As yogurt products come off Savushkin’s production line in large batches of individual flavors, they had to create this additional process to mix yogurt products of different flavors and package them into smaller quantities,” said Victoria. “This was being performed entirely manually, taking up to two minutes for each package.”

As Savushkin’s distribution to small shops and markets increased, so too did the demand on this process, and the need to scale and optimize.

“The benefits for automating this process were very clear to Savushkin – they would become much more flexible compared to other producers,” said Victoria.

The benefits for automating this process were very clear to Savushkin – they would become much more flexible compared to other producers.

“Savushkin had a pretty clear idea of what they wanted to implement,” said Victoria. “So, we gave them the tools, we provided them competences, we helped them to get started, and we showed them how they could use the tools for their applications.”

For their work on Cell 1, R-Pro and Savushkin used Visual Components to create a 3D model of the cell and generate the robot program offline. Using a Kawasaki robot post-processor created by R-Pro, they were able to establish a direct connection to the robot to verify the program. 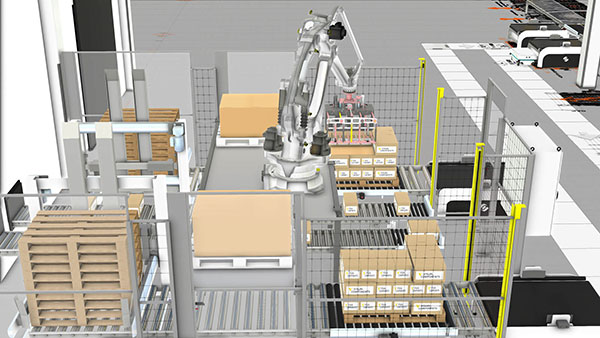 For Cell 2, Savushkin, assisted by R-Pro, used Visual Components to design a robot cell that mixed and packaged two flavors of yogurts. They simulated different cell designs and production scenarios, and arrived on a solution that met Savushkin’s requirements for this project. 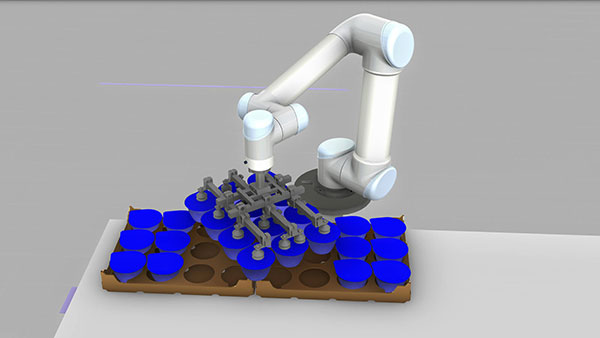 Visual Components was used to create a 3D model of the cell, choose the right robot, and create the program for the robot offline.

“Visual Components played a core part of this project,” Victoria said. “We used the software to create a virtual model of the work cells, evaluate the fit and performance of different robot models, and optimize and visualize the cell layouts. The design and analysis with Visual Components helped to form the technical requirements and specifications for Cell 2.”

Following the simulation study, Savushkin purchased the equipment for Cell 2.

We used the software to create a virtual model of the work cells, evaluate the fit and performance of different robot models, and optimize and visualize the cell layouts. The design and analysis with Visual Components helped to form the technical requirements and specifications for Cell 2.

With the support of R-Pro, Savushkin successfully programmed the Kawasaki robot in Cell 1, which is now operating at full capacity. R-Pro also trained Savushkin staff on how to use Visual Components and perform offline programming with the software, so they could do this internally for future projects. 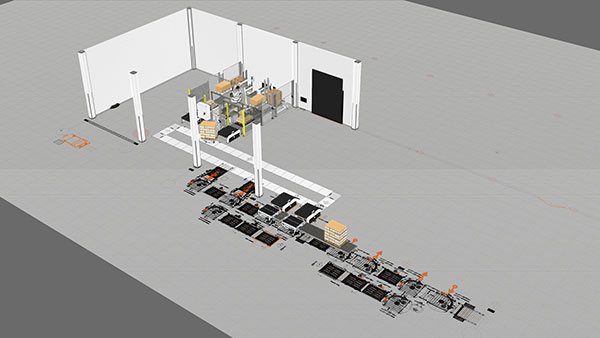 The yogurt mixing and packaging process in Cell 2, once an entirely manual process, is now fully automated. The cell consists of incoming and outgoing conveyors and a robot with a special gripper. 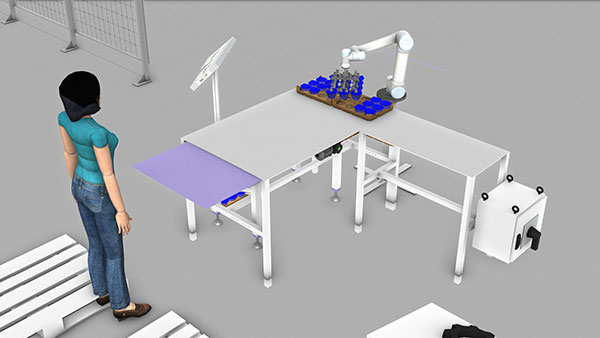 The solution that was designed led to a significant reduction in the cycle time for this process.

“We helped the customer to reduce the cycle time of this process from 2 minutes to 2 seconds,” said Victoria. “Cycle times are now more consistent and the process is much more scalable.”

“We are pleased with the results of our cooperation with R-Pro,” said Valeriy Kasjanik, the leader of this project from Savushkin. – “And Visual Components software created a real advantage for us in the market. We intend to work further and increase our skills and competences in the field.”

Savushkin is now working on a project to create a digital twin of its plant, where it plans to place PLC controllers on the factory floor and control operations online from the office.

We helped the customer to reduce the cycle time of this process from 2 minutes to 2 seconds.

Concern R-Pro is an IT and management consulting company based in St. Petersburg, Russia. The company has been working with productions of different scale for more than 20 years, and has competences in optimization of production and business processes, lean management and production, and quality management – which are now complemented with expertise in plant simulation, engineering and offline programming of the robots.

“Whatever we offer our clients, it all serves the idea of rationality. Our main goal is make our clients feel and operate better,” said Victoria.

Accuracy and throughput of labeling machines increase with Trio