RobotWorx is an integrator of new and refurbished robots and robotic systems, specializing in arc welding robots for industrial automation and other robotic applications. The company supports many robot manufacturers such as FANUC, Motoman, ABB, and KUKA. RobotWorx also offers a full inventory of new and used robotic parts. Most robot systems are sold with a warranty covering parts and service. RobotWorx' exceptional reconditioning process includes harmonic drive and belt assembly inspection/cleaning/lubrication and replacement as needed, battery replacement, wire harness inspection, and bearing check and lubrication.

Fanalca S.A. is a motorcycle assembly and manufacturing company for Honda located in Cali, Columbia. Thanks to RobotWorx, a robotics integrator based in Ohio, they were able to install their first welding robot. Fast service, low cost robots, and a strong Internet presence brought this international company to RobotWorx’ door.

RobotWorx’ solution has been a success: ‘‘With the robot, the welding process is 46% faster than the manual method. Plus, the quality, appearance, and penetration of the weld has improved,’‘ Fanalca spokesperson and engineer Andrea Morales said.

‘‘The most interesting thing about this project is the work environment,’‘ she said. ‘‘The people are so happy. This is the first step in the process of automation, on the long road to improving productivity.’‘

Experimenting with Automation
Fanalca S.A. has 1,079 employees at their Cali, Columbia plant. They specialize in assembling Honda motorcycles for domestic sale. Columbia is required by the government to manufacture 17% of motorcycle parts locally. This is part of the reason Fanalca is looking to automate production.

Choosing RobotWorx
According to Morales, RobotWorx offered two things other companies didn’t – fast service and low cost robots. ‘‘The answer (from RobotWorx) was very fast,’‘ Morales said. ‘‘This was very attractive - both the cost and the very fast response. With other companies we’d have to wait weeks to hear.’‘

Plus, RobotWorx keeps the cost of its refurbished robots low. Companies can save up to 50% from the cost of new when they buy used robotics systems. 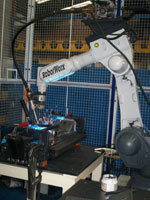 Finding RobotWorx
RobotWorx has a long tradition of selling robots throughout Canada and Mexico, but intercontinental sales are a relatively new development. The first robot was sold to an automotive company in South Africa in early 2007.

Fanalca also took advantage of RobotWorx free training offer. Andrea Morales and fellow engineer, Alvaro Gomez, traveled to the RobotWorx facility in Marion, Ohio, for hands-on training with the robot. Morales and Gomez trained for a week under the direction of robot technician Robert Edens Jr., before heading back to Columbia.

The End Result
Now, with the robot successfully installed in the Fanalca facility, Morales said the results have exceeded expectations. ‘‘The robot replaced the welder in the processes of large lots, and the operator is limited to manipulating the material, and in some cases inspecting the end weld result,’‘ she said.

Though Fanalca has been able to achieve higher weld quality and repeatability levels with the robot system, they still face a learning curve. ‘‘Robots have the capacity to react to small changes in the process that vary the final outcome substantially,’‘ Morales said. ‘‘We must try to change the mentality: the focus should not be solely on the benefit of the welding process in the overall piece, but rather the opposite, that the loss is a piece (or a lot) with a bad weld.’‘