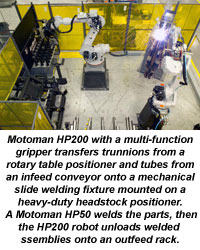 The New Holland Agriculture plant in New Holland, Pennsylvania, manufactures a wide variety of agricultural equipment, including the round baler.  Until recently, roll weld assemblies, which help form the bale, were welded on a robotic system that was installed in 2002.  Parts were manually loaded, unloaded and clamped using traditional weld fixturing.  Trunnions were manually located inside the tubes and pre-tacked prior to presentation to the robot.  Both the trunnion weld assemblies and the tubes were clamped in V-blocks.  With this method of holding the parts, all part and material variations were thrown to one side, which resulted in run-out between the shaft and tube, as well as misalignment between trunnion discs and tube slots.  In addition, welding of the trunnion outside diameters (O.D.s) to the tube inside diameters (I.D.s) had to be done out of position using coordinated motion between the robot and positioner.  Getting a good weld on the smaller diameter rolls was very difficult.  Weldments had to be checked 100% and straightened to maintain run-out requirements.  Misalignment resulted in costly extra operations to grind and repair welds manually.

In 2007, the New Holland plant implemented a new, fully automated robotic workcell to weld rolls that holds enough parts to support up to two hours of unattended production.  The new robot cell significantly improves part run-out tolerances and weld quality while reducing direct labor related to loading/unloading parts.  It also eliminates the need for checking roll run-out 100% and straightening rolls.  Misalignment between the tube slots and trunnion discs is rare, so grinding and weld repairs have been all but eliminated.  One robot loads and unloads a mechanical slide fixture mounted on a headstock positioner and the other robot welds the parts. 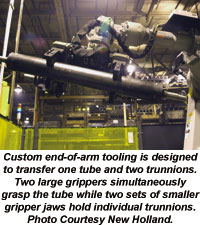 ‘‘Our primary objective was to eliminate the run-out variances and to consistently produce a quality weldment.  The extra operations required to ensure that a quality part went to the assembly line increased the roll weldment part cost significantly, and we wanted to eliminate or at least significantly reduce this cost,’‘ says Bob Burkholder, Operations Specialist, Manufacturing Processes and Technology.  Burkholder and Welding/Manufacturing Engineer, Clint Hinkle, had primary responsibility for implementation of the new robot system.  ‘‘We looked at many alternatives, including machining of the tubes and trunnions and re-design of the rolls, but these approaches would have further increased the part cost,’‘ he explains.

‘‘Working with Motoman, we developed the current concept that provides even better part quality and higher savings then we initially thought we could achieve,’‘ Burkholder adds.

Parts
Round baler roll weldments consist of tubes with trunnions on each end that are robotically tack-welded in place, plug-welded, and then final-welded around the entire circumference of the end seam.  Parts are made of 6.0-6.6 mm (0.24-0.26 in.) thick ASTMA500 steel.  The robot system accommodates 18 different assemblies that are batch run.

Welded round baler rolls are 1,318-1,959 mm (51.89-77.13 in.) long and weigh 21.8-37.2 kg (48-82 lbs).  Additional part variations are determined by the presence, position and/or lack of holes and slots.  Trunnions must be accurately inserted the proper depth into the tubes.  Run-out tolerance must be within ±1.5 mm (0.060 in.) for tubes and ±0.4 mm (0.016 in.) for trunnions.  Trunnions must be precisely aligned in the tubes to allow for proper plug welding, as well as final alignment of the rolls in the round baler.  Any misalignment (run-out) can lead to vibration, which causes wear and ultimately can cause weld failure in the field.

‘‘The use of self-centering jaws on both the weld fixture and robot manipulator to hold the trunnions and the tube significantly reduced the run-out variances.  This method assures that the trunnion will always be inserted into the center of the tube, despite material and part variances,’‘ according to Hinkle, who is in charge of day-to-day operations of the robot cell.

Workcell Equipment
Tubes enter the robot cell via a gravity infeed device that includes a singulator.  Trunnions enter the robot cell via a Motoman MR-300 rotary positioner.  The standard MR-300 positioner has a 300 kg (661.5-lb) capacity per side and a four-second index time. However, for this project, the positioner was modified for a higher (400 kg/881.8 lb) capacity and a five-second index time.  Two fixtures (one per side of the positioner) each hold up to 24 trunnions.

A laser sensor on the robot gripper, along with a sophisticated software search routine, is used to find holes and slots in the curved tube surface.  The tube is then rotated to locate the holes or slots in the proper position for welding.  To eliminate any misalignment errors due to damaged slots or dirt in the slot, the laser sensor also measures the slot length.   If the slot is not the proper length, the sensor moves to the next slot.  This laser sensor also verifies the part number and tube length and diameter based on the location and presence or absence of specific part details.

The HP200 transfers two trunnions from a rotary positioner along with individual tubes from an infeed device to a servo-controlled mechanical slide weld fixture mounted on a heavy-duty Motoman MH3000 headstock positioner with a 3,000-kg (6,613-lb) rated load and 4.95-second 180-degree sweep.

Prior to being loaded onto the fixtures, a laser sensor at an inspection station checks each trunnion part to determine the length of the welded trunnion shaft and its position relative to the gripper.  This information is used to determine exactly how far the mechanical slide portion of the fixture will insert each trunnion into the end of each tube.

The robot controller commands the headstock to reposition the parts during the welding process to facilitate robot access to both sides of the tube for the tack-welding, plug-welding and final-welding operations.

The slide fixture has the same type of Yaskawa servo motors as the robots, and these motors are controlled by the robot controller.  The ends of the slide fixture open and close, as required, to allow the Motoman HP50 robot to tack-weld, plug-weld, and make a circumferential weld around the end of the part during the final welding sequence.

After the Motoman HP50 robot welds the parts, the HP200 robot unloads them onto a gravity outfeed chute with three-level racks that include rack-full sensors.

The system includes a handy purge program that allows the HP200 robot to transfer tubes directly from the infeed rack to the outfeed rack when changing over the cell to run different tube sizes.  This purge feature improves safety by eliminating the need for manual handling of the heavy tubes.

Controls
Both Motoman robots are controlled by two NX100 DR2C robot controllers, interfaced as a single controller with one programming pendant.  Should New Holland decide to reconfigure and/or redeploy their robot cell in the future, this DR2C controller configuration provides additional layout flexibility that would allow the two robots and controllers to be separated.  One NX100 controller can control up to 36 axes of motion (up to four robots with a single programming pendant), so the current cell could have been configured using just one robot controller to control the two robots and the external axes (headstock positioner and Yaskawa servo motors used for positioning the trunnion gripper slide on the weld fixture provided by the plant).  This workcell uses an Allen-Bradley SLC 5/05 Programmable Logic Controller (PLC) with a MotoHMI user interface for overall cell control.

RESULTS
The Motoman system exceeds New Holland’s requirements for quality improvement.  It consistently holds run-out tolerances of less then 0.2 mm (0.008 in.) on trunnions and 0.75 mm (0.030 in.) on tubes, which is twice as good as the requirement.  The robot cell produces high-quality parts, which has significantly reduced extra operations and associated direct labor costs.

The new system exceeds the plant’s requirement for the ability to support one hour of unattended production.  The cycle time achieved is adequate (5-6 minutes per part, depending on part number and whether or not the part has slots) and is expected to improve even more as the plant implements additional tooling and part changes.

‘‘The cell was installed in late August 2007 and has been running without any significant problems since then. Except for weld gun maintenance, the cell runs the entire shift, through breaks and the lunch period,’‘ Hinkle says.

‘‘At the end of the shift, we fully load the tube infeed and trunnion positioner.  The cell then runs up to two hours, depending on which roll we are welding, with the lights out.  During the shift, the operator who runs the Drive Roll cell also runs an adjacent robot cell,’‘ he continues.

‘‘It was a real team effort between Motoman and New Holland to get us where we are today with this cell,’‘ Hinkle adds.