Robots help packagers work more efficiently, increasing output and reducing change over time. But they address hygiene concerns too. One company in the UK saw firsthand the benefits of automation, which helped the pancake producer streamline its packaging process. 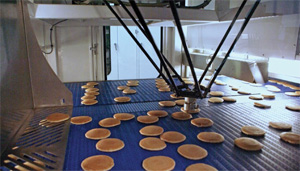 The product
Honeytop Specialty Foods, a bread products producer in the UK, understands that every aspect of its food production and packing process has to be efficient, hygienic, flexible and most importantly, productive. One of its most popular products, pancakes, was previously packed by hand, a labor intensive process. To address this lack of efficiency, the company began looking for an automated picking and stacking solution at its factory in Dunstable, Bedfordshire. They chose the help of ABB System Integrator RG Luma.

The process
For the center of the pancake picking automation, RG Luma selected ABB FlexPicker robots, specifically the IRB 360 FlexPicker, known for speed and efficiency, but also demonstrating reliability and flexibility. FlexPicker robots are capable of handling 110 picks per minute and stack the pancakes precisely and quickly. Each robot is connected, via a series of conveyor belts, to an automated hotplate production line. The conveyor belt operates on a cascading system before preparing the product for stacking and packing. This process has dramatically reduced turnaround time between products and ensured that Honeytop can meet its customers’ tight deadlines.

A camera mounted in front of each robot locates every individual pancake’s position on the moving conveyor below. The image is then communicated to the robot, and the ABB PickMaster 3.2 software tells each robot precisely which pancake to pick. RG Luma designed the software so that it could recognize overlapping product.

In addition to speed and efficiency, Honeytop places great importance on the issue of sanitation, especially with handling food items. The new automation system eliminates human error and ensures that no human hand touches the pancakes before they reach supermarket shelves, helping to prevent product contamination.

The success
The system not only proved instantly successful, but has demonstrated its value since the installation in 2011. William Eid, Honeytop’s director says, “We work in a competitive industry with very tight turnaround times and receive daily orders that are expected to be sent out to the depots within 12 hours of production. We have not experienced one issue since the installation last year. The robots have already enabled us to absorb a number of overheads, thanks to a reduction in labor costs and improved productivity.”

The versatility of the production line has dramatically reduced the changeover time between each different product.

Andrew Jones, RG Luma’s sales director, says, “After three weeks of production, a brand-new product was introduced in less than an hour without the need for any new investment from Honeytop.”