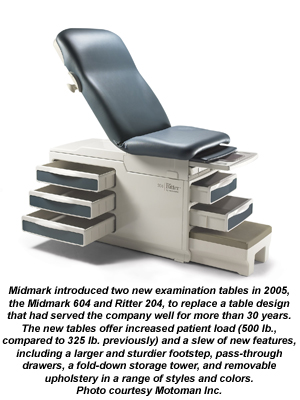 In 2003 the marketing team at healthcare-product supplier Midmark Corp., based in Versailles, Ohio, challenged its manufacturing team to develop a cost-effective process for fabricating a newly designed pair of manual examination tables.  The new tables, a staple among the company’s product offerings that also include power examination tables, procedures tables, casework, sterilizers, lighting, diagnostic equipment, dental operatories and veterinary products, were to replace a product line revered through the healthcare industry since their introduction in the 1970s. With a feature-laden innovative new table design in hand that, among other benefits, offered an increased maximum patient weight of 500 lb., compared to a 325-lb. capacity of the previous model, Midmark’s fabrication team went to work.

‘‘Controlling our manufacturing cost was a big factor with this product redesign,’‘ recalls Rick Turner, Midmark’s engineering manager and team leader for the project.  ‘‘To optimize efficiency, we focused immediately on automating the assembly process for building the cabinets for the examination tables.  Also, the cabinet design called for the forming of complex drawn metal components, which dramatically reduced part count compared to the previous table models.  The new design challenged our metal forming and fabrication department to not only develop the necessary forming tools and processes, but also to engineer a cost-effective means for assembling the cabinet components.’‘

Fitting it all into a Lean Layout
Midmark, with subsidiaries in Torrance, California, Orchard Park, New York, and Ernee, France, operates out of a 225,000-sq.-ft. plant in Versailles.  Its stable of metal-fabricating equipment, which includes six press brakes to 300-ton capacity, three 4000-W laser-cutting machines and four stamping presses to 300-ton capacity, feeds seven assembly lines, each dedicated to a specific product category.  When the manufacturing plant took on the new examination-table project (for its Midmark 604 and Ritter 204 manual examination tables), it was in the midst an ambitious project to revamp its assembly lines based on principles of the Toyota Production System (TPS).

‘‘To reduce our lead times to our customers, in 2001 we focused our efforts on developing assembly systems to allow us to produce one by one instead of batch processing,’‘ says Mark Oldiges, production supervisor. ‘‘ TPS, or what we call here the Midmark Production System (MPS), lets us provide the exact quantity of products exactly when the customer wants it.’‘

MPS focuses on identifying and eliminating seven categories of waste from manufacturing operations:
• Overproduction—producing more products than necessary, and sooner than necessary;
• Waiting—idle time that could be used more productively;
• Transporting—unnecessary transport of parts or materials;
• Inappropriate processing—operations that do not add value for the customer;
• Unnecessary or excess motion—activity by workers that does not add value to the products;
• Unnecessary inventory—exceeding one-piece flow; and
• Defects—rework or repair.

‘‘Our lead times went from 2-3 weeks down to 3 days due to implementing the MPS model,’‘ says Oldiges, ‘‘and when we took on the new examination-table project, we had to make its production fit into that MPS system.  We made the changeover to the new product last year, with our three-day shipping target set, from receipt of order, and have missed very few shipment dates.  Robotic welding to assemble the table cabinets has played a critical role in that success.’‘

‘‘With the requirement to increase the weight capacity of the table compared to the previous table design,’‘ says Art Smith, Midmark senior design engineer, ‘‘we developed a unitized cabinet construction to provide the necessary rigidity, while at the same time down-gauging our steel from what had been primarily 16-gauge on our previous table models.  Also, the previous table cabinet was comprised of 16 parts and 34 fasteners.  Taking that down to seven parts, all welded together, took a lot of time and cost out of our process.’‘

Consolidating 16 parts down to seven also demanded quite a bit from Midmark’s tooling and metal-forming engineers.  To prove out its complicated drawing operations engineered for forming the complex shapes, the firm contracted with simulation-software provider AutoForm Engineering, Troy, Michigan.

‘‘Custom-developed blanks designed and proved-out by AutoForm allow us to draw finished parts in one hit in the die with no need for trimming,’‘ says Smith, ‘‘further streamlining the manufacturing process and offering yet another means for us to control our costs.’‘

Tackling Fitup Challenges Allows Smooth Welding
The cabinets’ seven formed components come together at the robotic welding cell, again following the firm’s MPS system.  The cell operator gathers the parts from storage racks located near the cell and loads them into the cell’s head-tailstock positioner—with one exception.

Automated welding can bring challenges, most notably those related to part fitup.  ‘‘One of the seven parts comes off of the stamping press with too much edge curl to allow proper fitup in the weld fixture,’‘ says Joe Schlater, manufacturing engineer.  ‘‘So with this part, we require the cell operator to first load it into a sizing fixture, located near the weld cell, where we roll and reform the edges to remove some of the edge curl.  The development of that sizing fixture as well as that of the weld fixture was done here, and plays a critical role in the success of this project.’‘

To help bring the components together into a fairly large (20.5 x 23 x 46-3/4 in.) completed weldment, the firm also had to increase the number of spot welds made by the robot.  ‘‘We initially calculated the number of welds based on what we felt was needed to hold the assembly together and carry the loads,’‘ says Schlater,’‘ and came up with 44 spot-weld locations. But once we actually started fixturing the parts for welding, we wound up adding another 14 welds, to help pull the assembly into shape and iron out some of the edge curl.’‘ 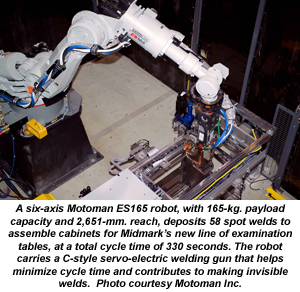 Robot Takes Center Stage
The robotic-welding cell, installed with all of the necessary safety apparatus, features a six-axis Motoman ES165 ‘‘Expert Spot’‘ welding robot, with 165-kg. (363.8-lb.) payload capacity, 2,651-mm. (104.4-in.) reach, and a work envelope that extends behind the body, providing easy access to the weld gun for maintenance.  To minimize maintenance, Motoman designed the robot so that weld-gun cables as well as air and water lines route through the robot’s base and upper arm to the robot’s wrist.  This setup proves ideal for the welding application at Midmark, and other similar weldments that require the welding gun to work over a wide range of motion in order to reach all of the spot-weld locations.

The ES165 was integrated with a C-style servo-electric welding gun that, while is more expensive to purchase compared to a conventional pneumatic or hydraulic actuated gun, provides lower life-cycle costs.  The servo gun allows Midmark’s operator/programmer to minimize cycle time by programming the electrodes to open the shortest distance needed to clear the tooling and sheetmetal.  Also, the gun’s programmable closure speed ensures a quick closure as it makes each spot weld while allowing for a soft touch at impact for dent-free welds and long electrode life.  Weld power comes from a mid-frequency DC welding transformer, also an extra investment made by Midmark that, when compared to traditional AC power supplies, was easily justified.

‘‘The DC power supply delivers a weld current of 10, 200 A to the electrodes,’‘ shares Schlater, ‘‘at an extremely low voltage.  Compared to an AC unit, our power draw is probably reduced by 15 percent with the DC unit.’‘

The weld cycle: 10 cycles of electrode squeeze, 15 cycles of weld current and 10 cycles of hold time, yielding spot-weld nuggets 3/16- to 1/4-in. diameter.  The welding electrode on the visible side of the cabinet components has a flat face, to help eliminate marking, while the opposing electrode has a tip with a 2-in. radius.

Midmark runs the robotic-welding cell two shifts, five days per week, with an uptime of 98 percent.

Making Mark-Free Welds
Critical to the success of the welding project, stresses team leader Turner, was the ability to make mark-free welds.  Here the precise programmable control of the servo gun helps, but significant effort upfront with robot programming, by Turner’s team and by Motoman personnel, made the difference.

‘‘We initially sent our computer model of the fixtured assembly to Motoman for their programmer to work with and use to develop the robot program to execute the weld routine,’‘ recalls Turner.  ‘‘Using their MotoSim®EG robotic simulation software (which combines 3-D graphics and cycle-time calculations) over a 2- to 3-week period, Motoman programmed the robot and developed the motion routine needed to avoid any interference with our fixture and robot.  Then, once we had the welding cell installed in our plant, a Motoman programmer made two additional visits here to help fine-tune the welding-gun angles, necessary for optimizing weld quality and meeting our requirement of invisible welds.  We found that you have to precisely square-up the tip of the welding electrode to the sheetmetal at each weld location in order to prevent any dents or marks.’‘

Here the servo-electric actuation of the weld gun helps too, says Midmark’s welding engineer. By being able to control the rate at which the electrodes close, and ramping up the clamping force provided by the electrodes, weld quality and cosmetics are optimized. This has been proven for years in automotive assembly plants that have a lot of experience using servo-electric welding on Class A exposed surfaces.

Midmark’s own robot programmer has also done some fine-tuning of his own, to shave critical seconds from the weld cycle and further optimize the process.

‘‘Always looking to remove any excess robot-arm movement between weld locations, as well as removing any excess and unnecessary stroke of the welding gun,’‘ shares Oldiges, ‘‘our programmer recently was able to reduce the production cycle by 30 seconds.  All told, we’ve reduced what was a 420-second production time when we launched the process last year, down to 330 seconds.

‘‘What our team has done with this project,’‘ summarizes Turner, ‘‘dropping our old table line over a 30-day period and launching this new table design, has been remarkable.  The table has done well in the marketplace, our team continues to do well with the project, and Motoman’s support helped make it happen.’‘