PASADENA, Calif. - The next giant leap for NASA in space may well be a hop.

Walking and rolling have, traditionally, dominated how NASA robots - and astronauts - have moved about places like the moon and Mars.

But a select class of up-and-coming robots will literally skip over the idea of using just wheels and legs to negotiate the surfaces of other worlds.

'The only way you can go over something several times your body size is to leap,' said Joel Burdick, a professor of mechanical engineering at the California Institute of Technology, who has built a working prototype of such a robot. 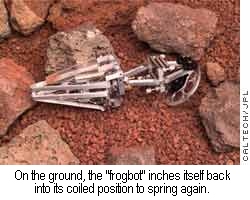 His NASA- and National Science Foundation-funded robot uses a single motor to hop, right itself and swivel about on a round foot before hopping again.

It can point in any direction, compressing itself down with a geared, six-bar linkage (which gives the robot its distinct frog-like appearance) before launching at a 45-degree angle.

No matter how it lands the robot can quickly right itself by using a two-phase system to regain its footing, flipping first onto its back and then raising itself up with the help of a flap that doubles as a solar array. A whole cycle, as seen in the accompanying video, takes only a few minutes.

Weighing less than 3 pounds (1.3 kilograms), the robot can hop an impressive 8 feet (2.4 meters) on Earth. On Mars, where gravity is about one-third that of Earth, the 'frogbot' could clear 24 feet (7.2 meters) - a distance that nearly rivals the world long-jump record.

According to a 1999 National Academies of Science report, Scientific Rationale for Mobility in Planetary Environments, '& hopping can cover large distances and thus provide significant mobility,'

The report found that hopping is a practical choice for exploring virtually any planetary body - a list that includes asteroids, like the one the tiny Muses CN rover will visit in 2005.

'A very efficient way to use your energy in low-gravity environments is to hop,' said Burdick, who estimates his robot could cover 660 feet (200 meters) an hour on Mars, pausing only to right itself and recharge its batteries.

Engineers have recognized the efficiency of the hop for decades. In 1959, Hermann Oberth proposed NASA develop a hopping car for use by future astronauts on the moon. Others pushed for pogo sticks.

NASA declined to use either, but did manage to gain some practical experience all the same.

During the robotic Surveyor 6 lunar mission in 1967, the probe restarted its descent engines after landing, 'hopping' about 8 feet (2.4 meters) across the moon's surface.

And once the Apollo missions got underway just two years later, the hop was one of several bouncy gaits used by the astronauts.

'The so-called kangaroo hop does work,' said astronaut Buzz Aldrin from the moon's surface during Apollo 11, before settling for a more conservative flat-footed walk.

However, the hop can be a risky maneuver, spilling astronauts on their duffs and dispatching flyweight rovers on leaps unthinkable here on Earth.

No one is more aware of that than the scientists behind the Muses CN nanorover, which will be dropped from a Japanese spacecraft onto the asteroid 1998 SF 36 in 2005.

The tiny rover - the smallest NASA will have ever sent into space - will for the most part roll around the asteroid with the help of its four wheels.

However, later in the mission the rover will attempt several scissors-kick moves that should allow it to jump about in a gravity environment perhaps one-one hundred-thousandth that of the Earth. The danger is the rover may take what could turn into a flying leap.

'It's possible it could jump off the asteroid - to launch ourselves into orbit,' said Ross Jones, the Muses CN project manager at NASA's Jet Propulsion Laboratory.

Still, jumping rovers may streamline the mobility process on other planets, especially in rock-strewn areas that are a geologist's delight but that present nothing but headaches to an engineer.

Burdick hopes his robot - which in a next-generation version will sport wheels as well - can shoulder some the burden of planning which path to travel, picking its own routes independently and then hopping there on its own without the constant intervention of controllers sequestered on Earth.

The question whether hopping may replace rolling or vice versa in the world of planetary robots ultimately boils down to what you want to accomplish, Jones said.

'Jumping is certainly better for covering more of the asteroid's surface area but with rolling you'll be able to better investigate the surface where you are and learn more about it,' Jones said. 'It's sort of a trade-off between going to a few places farther away or going to local areas and learning more in detail. They both have advantages.'