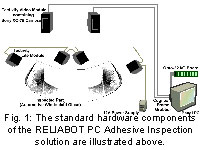 RELIABOT® PC Adhesive Inspection is a complete, packaged solution for inspecting the bead of adhesive, sealant, foam, or other material around the perimeter of a part. The solution consists of a bundled Panel PC, Cognex Frame Grabber card, Opto-22 I/O card, Sony cameras, Tectivity camera enclosures, and Tectivity red LED lighting. At the heart of the solution is SHAFI’s RELIABOT PC software which provides an easy user interface to allow even untrained personnel to set up and configure a complete system in a very short period of time. The critical inspections performed are bead width, bead position, and continuity. These inspections ensure consistent product quality.

The adhesive inspection system is set up to perform all inspections on a part immediately after the bead has been applied. If the part is very large, multiple cameras can be utilized to ‘‘zoom in’‘ on different areas of the part so there is enough resolution for accurate measurement. High- resolution cameras, such as the Sony XC-70 camera which offers 1020x768 resolution, may also be used. The Cognex frame grabber supports a variety of cameras and both low and high resolution. Up to four cameras are supported per board. Additional cameras may be used by using multiple frame grabbers or by using a multiplexing switch.

Standard Tectivity Lite Modules are used to illuminate the part and the bead evenly. If the part is small and the bead color contrasts well with the part background, then a single overhead light will often suffice. If the bead is the same color as the part, such as grey adhesive on a stamped metal part, then four or more lights may be needed from different low angles to illuminate the bead only and not the rest of the part. Finally, red ‘‘band pass’‘ filters are placed on the lenses to allow only the red LED light to pass and to filter out 85% of the ambient light. This eliminates problems from changing light conditions in the plant.

Once all hardware is set up, RELIABOT PC is configured for the application in four simple steps: 1) Setting brightness and contrast on the cameras, 2) Training a fixture for the part, 3) Training the bead line or lines in each camera, and 4) Training a ‘‘master’‘ part. Each step is performed using a simplified wizard that guides the user through the training process on step at a time. Once all four steps are complete, the application can be tested for robustness and tweaked if needed. 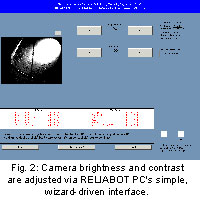 In the first step, brightness and contrast are adjusted for each camera, one at a time. The user uses a mouse to click on arrow buttons to increase or decrease the value of each setting. The user can also click on a ‘‘Get Picture’‘ button to take a new picture and see the result of the changed setting. The brightness and contrast are chosen for the best contrast and cleanest image. Once this is complete, a ‘‘SAVE’‘ button is used to save the changes (or the button can be skipped to revert back to the previous settings).

In the second step, a fixture is trained. The fixture is some fixed, repeatable feature of the part which will be used to find the part’s exact position. This is done because the part may not be presented in exactly the same place each time – there may be a small difference in X, Y, or angle. The fixture allows the vision system to find the bead position relative to the part instead of a fixed position. The user trains a fixture simply by using a mouse to drag and size a rectangle around the desired feature. RELIABOT PC uses Cognex VisionPro’s PatMax tool to automatically train an optimal pattern for the selected feature. The user trains a feature for each camera image.

In the third step, the user trains the bead line for each camera image by using the mouse to drag line segments along the bead. The line segments can be in one continuous ‘‘string’‘ or they may be in disconnected pieces. Curves are approximated via multiple short segments. The user is also asked for the expected width of the bead, the minimum inspection region (granularity), and the width of the camera image (in order to determine scale). With this information, RELIABOT PC automatically configures multiple Cognex VisionPro FindLine and Caliper tools and places them along the bead line for precise edge detection. 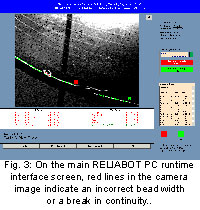 In the fourth and final step, the user places a part under the cameras that is known to be perfect – that is, it has the nominal bead width and position throughout. With the click of a single button, the entire part is mastered for all cameras. All future camera images will be compared to the original master. At this time, the user also specifies tolerances for position, in millimeters, and width, in percentage above or below nominal. The width tolerance is not specified in millimeters because the bead width may vary naturally, especially around corners. There are four tolerances: upper limit, upper warning, lower warning, and lower limit. The warning is used to indicate to an operator that the part may be drifting out of specifications but has not quite reached the limit (allowing process changes to be made before this happens).

In AUTO, the vision system receives a trigger from the work-cell robot or PLC via an Opto-22 input. This triggers all pictures to be taken and all gauging to be done, and a single pass/fail result is returned to the robot or PLC via an Opto-22 output. Results are shown graphically on the RELIABOT PC interface screen so that if a part fails, the operator can quickly discover which inspection(s) failed and why. First, an overall view of the part is shown with passing cameras in green, failed cameras in red, and warnings in yellow. If the user clicks the mouse on a failing camera, that camera’s image is shown with each contiguous bead line group shown in green, yellow, or red. Finally, graphics are shown on the bead line itself: Parallel lines on either side of the bead to show position and a perpendicular line to show width. Lines are shown in green, yellow, or red. For example, if most of a bead is all green but there is one red perpendicular line, this means the width is incorrect at that point. RELIABOT PC will also display a single red line at any point where a bead was expected but was not found at all.

In summary, the RELIABOT® PC Adhesive Inspection System is a complete, bundled hardware and software package for inspection of bead width, position, and continuity. The system hardware and software can be set up quickly by following a few simple steps. SHAFI’s RELIABOT PC software provides a simple interface for rapid application setup, allowing untrained personnel to learn and support the system quickly. RELIABOT PC also utilizes Cognex VisionPro which allows the adhesive inspection system to achieve a new level of reliability than similar systems from the past. The system allows manufacturers to ensure consistent, high quality parts every time.