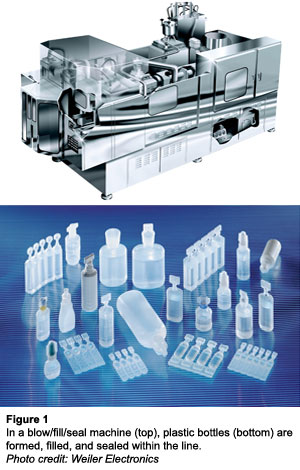 Look around you. Chances are that you'll see a dozen different uses of plastic. In housewares, electronics, packaging, transportation, and more, plastic is ubiquitous in our lives. The plastics industry is estimated to produce 200 million tons of material annually. In the past, plastic forming machines were strictly the province of hydraulics. Today, electronic shafting has begun to play an increasingly important role in the industry, offering avenues to improved performance, increased throughput and reduced operating costs.

There are four main classes of plastic forming: thermoforming, blow molding, extrusion, and injection molding. Particularly in the areas of thermoforming and blow molding, motion control has gained a solid foothold. In the thermoforming process, a plastic sheet is heated and pressed into a mold to form a shape such as a plate or a cup. A recent trend toward using preprinted sheets allows manufacturers to easily produce patterned goods. The thermoforming preprinted sheets requires recognizing and precisely locating registration marks, then synchronizing the mold cycle to the position of the sheet. Like printing, it's a perfect application for motion control.

The level of sophistication is on a par with on-the-fly filling. The mold begins its downward motion before the sheet has reached its final position, eliminating dead time. The following step, trimming, requires precise synchronization of the formed part with the trim press. With motion control technology, the task is straightforward. Mechanical shafting, not so much. “This trimming process would be very challenging with a 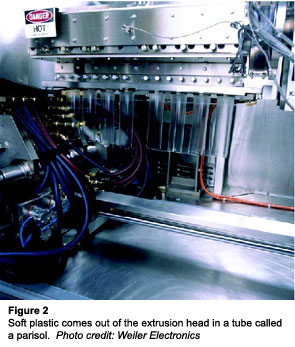 mechanical line shaft," says Henderson. "I don't even want to imagine that system.”

Moving the Platens
Blow molding is another application increasingly enabled by electronic shafting. In a typical blow/fill/seal machine such as those produced for the pharmaceutical industry by Weiler Engineering Inc. (Elgin, Illinois), a single machine forms a plastic bottle, fills it with product, and seals it (see Figure 1). 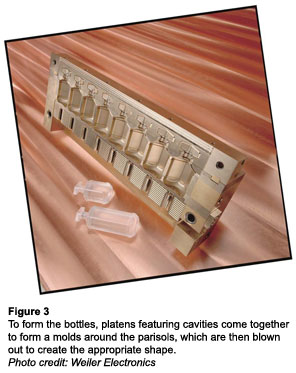 The plastic starts as pellets contained in a barrel extrusion head. A screw transports the pellets while heat zones in the barrel bring the plastic close to its melting point. The energy generated in the screw completes the process, converting the plastic into a highly viscous material that gets extruded as a pliable tube called a parison (see Figure 2). Below the extrusion head, two platens impressed with one or more matching cavities come together to capture the parison and enclose it to form a mold. High-pressure air blown in through the top expands the soft plastic, pressing it against the sides of the mold to form a shape, which then cools. The process typically takes 10 to 14 s; to increase throughput, molds frequently feature an array of cavities (see Figure 3).

Material characteristics such as melting temperature and expansion rate vary from plastic plastic. To address viscosity variations, machines typically increase or decrease the speed of the screw, a perfect task for a servo motor. The extruder in a typical Weiler machine only runs up to about 140 RPM, so they drive it using an AC motor combined with a gearbox.

An alternative that can provide energy savings is to drive the extruder screw using a synchronous, direct-drive motor. It can increase dynamic range, adding flexibility. "You have to size the motor for the maximum torque you’ll require," says Ray Seifert, Director, Applications Engineering at Baumueller-Nuermont Corp. (Bloomfield, Connecticut). "Synchronous motors are more efficient than asynchronous motors when they’re run at speeds and torques other than the rated level." Direct-driving the screw additionally eliminates gearbox losses. The approach can improve efficiency by as much as 15%. Given that these machines frequently operate 24/7, the savings can be significant.

Because of differences in density and expansion rate, changing plastic type generally requires a change in the bushings and pins of the parison head, if not a completely different mold. Positioning the platens beneath the extrusion head using motion control rather than hydraulics can dramatically simplify and speed the changeover process. "With hydraulics, you have to reset the ‘down’ position of the cap-forming and fill head every time you change molds, adjusting the hydraulic cylinder," says Robert Mazur, electrical Engineering Manager at Weiler. “With electric servos, once position is adjusted from the touch screen and saved in the recipe, you simply select the recipe for that mold and plastic. You don't have to keep setting it up every time.” 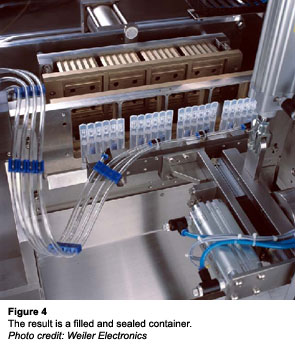 In addition to efficiency, use of motion control can eliminate a source of contamination. Hydraulic cylinders can leak oil. Pharmaceutical manufacturers operate under stringent regulations for product purity, so they prefer not to have hydraulic cylinders placed over their fill area. Motion control provides a clean alternative (see Figure 4).

Electrically positioning the platens also reduces shock and machine wear. Servo motors bring the platens to their positions rapidly and stop precisely, unlike the hydraulic rams, which just slam the platens together until they hit hard stops, jarring the machine. Depending on the strength and rigidity of the machine chassis, that kind of repetitive shock holds the potential to cause significant damage.

The high-impact approach does provide the benefit of improved stability, however. "When you have two moving platens, one side needs to be more powerful than the other," Mazur says. "With hydraulics, we put a larger cylinder on one side so you can never back it down. You're continually pushing against the other cylinder." That is not to say that motion control cannot perform the task, it simply requires a more careful, measured design approach. "With servo control, you control the torque settings," Mazur says. "Then you operate the left-mold servo in torque mode at less than 100%, keeping the right-mold servo in position mode." It's a different technique but the result is the same degree of stability using the cleaner, more efficient, more flexible technology.

Pump It Up
If motion control has a solid footing in both the thermoforming and blow molding markets, it still fights for position with hydraulics in extrusion and injection molding. The problem is primarily one of scale. Motion control can perform effectively in small machines, but there are limits. "At some point with the larger machines, you still need the advantage of the hydraulic system," Seifert says.

In a drive to increase throughput, machine builders and end-users strive to put as many products into an individual mold as possible. The problem is the larger the number of products, the more pressure required to push the plastic into the cavities, which requires both a high clamping force and high injection pressure. “Both of those things can be applied with servo control but as molds get bigger and the pressures and clamping forces get higher and higher, the size of the motors required becomes impractical," says Henderson. "There’s a point of diminishing returns. That's what the OEMs and end-users are struggling with. That's where we have to work a little bit outside the box. We may always have hydraulics in injection molding because of the size of the machine, so let's make the hydraulics more efficient. If we've got to live with it, let’s make it better.”

In a standard hydraulic system, a constant-speed variable-displacement pump maintains oil pressure. The pump motor runs whether or not the ram is moving, which means it is constantly using power. In the case of a machine operating 24/7, that represents a significant amount of wasted energy. A servo-controlled, variable-speed, fixed-displacement hydraulic pump provides a solution to that problem, running only when flow is required. The rest of the time it uses negligible power. “During a clamp cycle when you need a lot of pressure but there's virtually no flow, the motor is not turning at all," says Seifert. "You can achieve very high efficiency gains over the standard approach of running your hydraulic pumps all the time.” In addition to gains in operating costs, the approach reduces wear and increases lifetime.

Hydraulic Versus Electric
Although the plastics market for motion control continues to grow, the technology is not likely to replace hydraulics anytime soon. Some of the biggest barriers appear to have little to do with the performance. "It really comes down to cost," Foote says. "At what point is an OEM willing to accept the cost to build an all-electronic machine? Servos have not gotten to the place where they can completely knock out the hydraulics. The size versus cost argument just isn't there.”

“In the long run, the customer will save with an electric machine but electrics are not always the answer," Mazur says. "You need to compromise to be cost effective." The company is looking at producing all-electric machines. Indeed, they have built two so far, though market acceptance has been mixed. Part of the problem is that many companies lack experience with servo motors. After all, the most precise, efficient, high-throughput machine is useless if it is shut down due to a fault. "Smaller companies don’t have engineering people on staff," he observes. "They rely on maintenance people to maintain the machines and sometimes they just don't have the technical expertise to handle the more complicated servos, even with the diagnostic tools we supply.”

Henderson agrees. “The challenge is having the right person at the right time with the right knowledge base who can keep the machine running." Ultimately, if the motion control industry wants a bigger piece of the plastics market, it needs to question how best to ease the transition for end-users. “End-users are not keeping their engineering resources," he adds. "The question is how do we take our knowledge and our expertise and put it into the customer's hands so that they can take care of the machine themselves?”