Sandia is a multiprogram National Laboratory operated by Sandia Corporation, a Lockheed Martin Company, for the United States Department of Energy. With many years of experience and hundreds of successful projects in designing, developing, and delivering complex micro- to macro-sized automated systems, Sandia’s Intelligent Systems, Robotics, and Cybernetics (ISRC) organization responds to challenges impacting national security and US economic competitiveness. The Lockheed Martin Corp. has managed Sandia since Oct. 1, 1993, for the U.S. Department of Energy. Most of Sandia’s work is sponsored by DOE’s National Nuclear Security Administration, but we also work for other federal agencies, including the Department of Defense, Department of Homeland Security, and others. We work cooperatively with a number of government, U.S. industry, and academic partners to accomplish our missions. 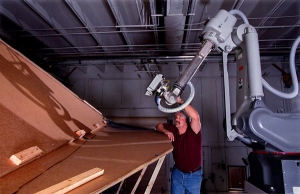 U.S. F-117A Nighthawks, also known as Stealth fighters, swoop largely undetected through radar because their "radar-invisible" paint and angular exterior minimize reflected signals. Over the next few years, the fleet of F-117As will be refurbished, including removing the aging thin films and coatings and replacing them with a special radar-absorbent paint that is easier and less expensive to apply and maintain.

During manufacture, the thin films and coatings of radar-absorbent materials were painstakingly applied to each F-117A to ensure that no defects existed. Any slight deviation from the Nighthawk's exacting surface specifications -- even an air bubble or a screw not tightened exactly to specifications -- could result in a blip on an enemy's radar screen. The new painting process is no less exacting.

Nighthawks are large aircraft -- 65 feet long with a 43-foot wing span -- and each F-117A is slightly different from the others. The Nighthawk's angularity and the need to keep the paint spray nozzles at exactingly precise distances from the aircraft's surface at all times require both accuracy and adaptability to adjust for variabilities from one aircraft to another. Maintenance downtime for the F-117As needs to be minimized so that each fighter is available for military operations as soon as possible.

The first Nighthawk to be refurbished with the new coating was done manually by five painters and a masking crew, and took 4 and a half days. Could this process be automated? Could a robot perform this demanding task cheaper, faster, and better? The special capabilities of Sandia National Laboratories' Intelligent Systems & Robotics Center permit an affirmative answer.

The first challenge in designing the automated painting system was to find a robot or robots big enough to reach all of the plane's surfaces. To keep costs down, the design team used commercially available equipment as much as possible. The Sandia painting system features three commercial robotic arms used in U.S. auto factories called the Motoman P8.

Two of the arms are mounted on 30-foot-long rails. Each 10,000-lb robot-and-rail system is mounted on a specially designed air lift so that two people can move its base to desired locations around the aircraft. A paint nozzle at the end of each of the robotic arms is connected via tubes and wiring to an oversized stainless steel paint can. The coating-delivery system -- the paint nozzles, tubes, pumps, and cans -- is also a Sandia creation. One robot-rail combo paints the Nighthawk's top surfaces; the second paints the bottom surfaces. Cameras and other sensors help a nearby computer plan and guide the robots' every move. This merging of commercial hardware with Sandia-designed custom hardware and software exemplifies Sandia's unique system integration capabilities.  The third floor-mounted, stationary robot is for painting the Nighthawk's removable parts, such as weapon bay doors and rudders.

The Sandia team developed a unique feedback, path-planning system that adjusts for variabilities from aircraft to aircraft. Path planning is the fruit of Sandia's years of research in "geometric reasoning," which was developed using DOE Defense Programs and Lab-Directed research funding. Geometric reasoning gives robots the capability to automatically determine the movements needed to carry out the task, even if the workpiece varies from piece to piece, as do the F-117As. A pair of stereovision cameras mounted at the end of the robotic arms locate "landmarks" on an F-117A corresponding to vertices where a Nighthawk's angular facets meet. Based on this feedback about the unique geometry of each plane and information about the robot's reach, joint limits, characteristics of the painting process and other factors, the software automatically generates a path for the robot to follow as it paints. The system also ensures that the robotic arms don't violate a 6-inch buffer zone around the fighter. The motion-planning software is what allows Sandia to rapidly and inexpensively develop robot systems for small-lot production operations like painting a limited number of aircraft.

To design the system, Sandia used a 3-D computer model of the F-117A provided by Lockheed Martin. Models permit the team to use Sandia's geometric reasoning software to perform a "reachability analysis" of the F-117A, which helped determine where the system's two robot-and-rail systems would have to be repositioned on the hangar floor to reach the entire aircraft.

Before painting begins and each time a robot-and-rail system is moved during painting, the computer vision system automatically registers reference points corresponding to three jack stands the Nighthawk is placed on inside the hangar. It then measures the precise locations of the two robot-and-rail systems with respect to the aircraft.

With almost human-like agility, the rail-mounted robotic arms move with seven degrees of freedom. Six of those are the three spatial dimensions (x, y, and z) plus roll, pitch, and yaw, which is normal for many manufacturing-type robots. The seventh degree of freedom gives the robot the ability to maintain a fixed x, y, z, roll, pitch, and yaw position from multiple poses. This is like having an "extra elbow" to reach around things that are in the way. It also gives a large range of motion along the 30-foot rail required to coat a large aircraft.

The system was delivered to Lockheed Martin's Advanced Development Projects group, better known as the "Skunk Works," in September 1998. Members of the Sandia team helped install and acceptance-test the system during the following five months. Safety precautions are incorporated into the system and personnel are trained in robot awareness. In terms of size and level of complexity, this was the largest intelligent system Sandia has ever delivered to an outside customer.

Whereas the first aircraft was refurbished using five painters and a masking crew taking four and a half days, the first robotically painted aircraft at the Skunk Works took only three days with a smaller crew. Once it is in a production mode, the system will provide considerable cost and time savings to the Air Force. The new system will also improve the final finish quality and reduce maintenance costs by minimizing the amount of time spent painting and reworking each aircraft. Signature testing has been performed on the robot-sprayed aircraft and the results were significantly better than expected. According to Col. Samuel Ryals, Director of the Air Force's F-117A System Program Office, they expect to yield a net cost savings measured in the millions of dollars over the next four years. The Sandia team's efforts will directly contribute to the F-117A's continued sustainability and combat effectiveness.