ebm-papst is an innovator and market leader in motors, fans, and blowers with core competencies in motor technology, aerodynamics, and electronics. With over 15,000 products, we provide solutions to a wide range of markets including Air-conditioning and Ventilation, Appliance, Automotive, Commercial Refrigeration, Heating, Industrial, Lighting, IT / Telecom, Medical, Transportation and more. Our market focus for drive solutions includes Automation, Intralogistics, Medical Technology, and Access Control. Motor types include brushless internal and external rotor motors, and brushed internal rotor motors. Available offering of angular, planetary, and spur gears. Additional components include controllers, encoders, and brakes.

Orderly throughput at the rack

A new pallet flow rack gives feed supplier Miavit high throughput with absolute product safety. And since the flow levels have only half the usual slope, the company also saves a lot of money.

Cloppenburg district, in the middle of the flat Lower Saxony countryside. There are farms every 500 meters on both sides of the highway with big, flat barns next to the brick houses. For every one of the 165,000 people living in this region southwest of Bremen, there are 87 farm animals. Agriculture dominates the district, where nearly two million pigs, 170,000 cattle, nine million chickens and three million turkeys are kept. Their health is of great importance to the region.

Prevention instead of medication 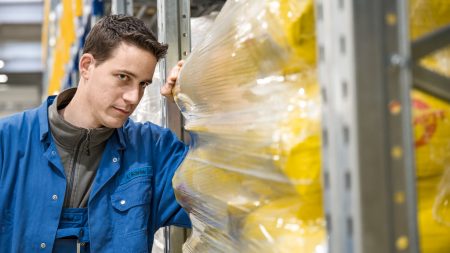 Alexander Schröer is satisfied with the condition of the stored goods; the new flow rack prevents damage. (Photo | Jan Hosan)

That was already true 50 years ago, when the veterinarian Dr. Hans Niemeyer began working intensively with premixed animal feed. His motto was “prevention instead of medication.” Soon he founded Miavit. The company’s name stands for minerals, amino acids and vitamins. Since 1964 it has become Germany’s market leader for premixed animal feed, which it produces in many different forms (tablets, powder, liquids) and quantities at its headquarters in the quiet town of Essen (population 8,000).  In recent years, the company has been supplying more and more customers from all over the world. Now exports account for 50 percent of its revenue. The family-owned business with 360 employees was beginning to reach its limits.

Breaking new ground
“We have several production facilities here,” says Alexander Schröer, who heads Miavit’s engineering department. “Preparation of products for our customers was done more or less manually. That was error-prone and we were starting to have space problems with our forklifts.” Company management decided to build a logistics center. There they wanted to bring together the premixes from the different facilities and prepare them for customers as quickly as possible. At the heart of the new facility is an automated high-bay warehouse. “We checked out a few systems and then invited Bito Lagertechnik,” recalls Schröer. 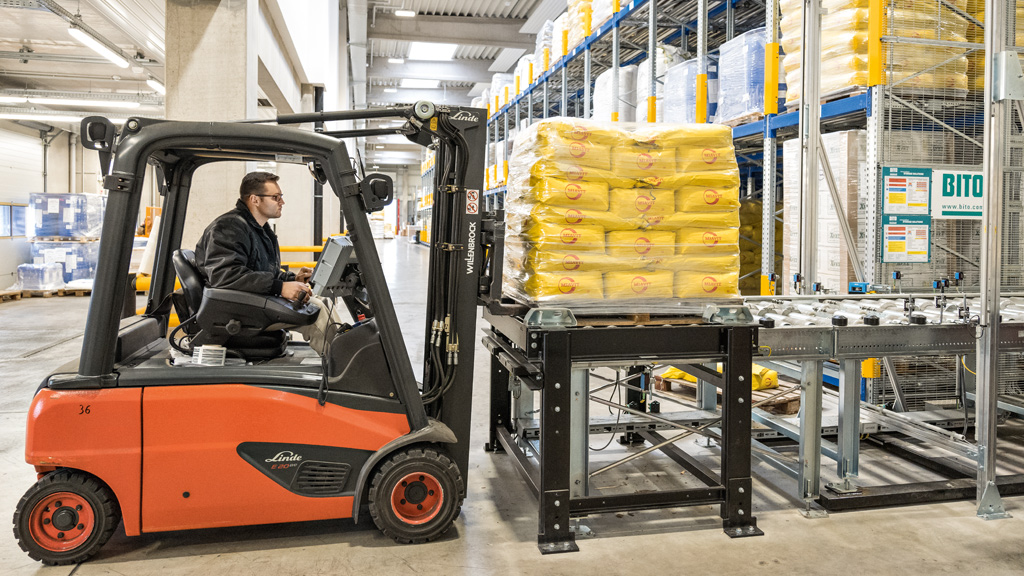 Goods delivered with swap trailers are placed on the sorting conveyor by a forklift. The conveyor checks the weight and condition of the pallets and moves them to... (Photo | Jan Hosan)

On October 14, 2014, Stephan Klotzke drove onto the grounds at Miavit with its ocher-colored factory buildings. He is Bito’s area sales manager for the Bremen region and this was not his first visit. A few years before, he had installed a narrow-aisle rack there. But what Managing Director Lukas Middendorf presented to him on that day was in a different league and would also be something new for Bito. “After our first brainstorming session in a small group, there were still a few systems to choose from.”

But after five more sessions, it became clear that only a pallet flow rack would satisfy the company’s requirements, which called for trouble-free transport of different pallet types with many different kinds of packaging. “For sacks alone, we have very different bulk densities, from loose to jam-packed,” says Schröer in describing the variety. Then he adds another important challenge: “Since we sometimes work with hazardous goods, for a height of over 7.50 meters we would have had to satisfy some very strict conditions including a very expensive sprinkler system.”

Control instead of gravity 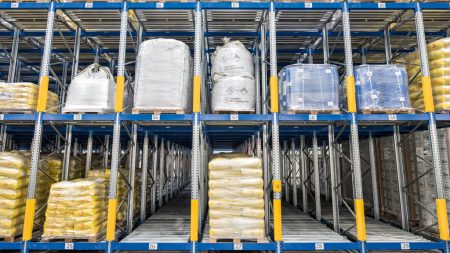 Bito’s PROflow active convinced Miavit’s management. In contrast to conventional flow racks with their four-percent inclines, it only needs two percent for its flow levels. So the three-level warehouse at Miavit only reaches a height of 7.50 meters. Its highlight: it doesn’t work like most others by using gravity to move the pallets from the loading side to the unloading side along a runway. Instead it uses electric drives in its rollers. “This capability distinguishes it from the typical flow racks on the market, which work with gravity,” says Alexander Lang, product manager at Bito, who has supported the PROflow active since its launch. “That was also something new for us.”

Thanks to the start assist by the drives, the flow rack can deal with a wide range of packaging types. On runways that work with gravity, the pallets roll down on their own as soon as one is removed at the front. When they run into each other, forces are exerted. “Sometimes pallets will be overpacked,” says Schröer. “Then the packaging protrudes over the edge of the pallet. A collision can damage the packaging and make the goods unusable.” The drives in the PROflow active can keep the pallets separated as they move along the runway, avoiding unwanted contact.

For the start assist, Bito uses a drive solution jointly developed with ebm-papst. The system consists of a drive with integrated electronics and transmission and is delivered with wiring and fastening nuts. “That makes it extremely easy for us to install in the rollers,” says Alexander Lang happily.

“The drive is what distinguishes PROflow active from typical flow racks on the market.”

Alexander Schröer also smiles as he walks along the three-level flow rack with its 30 rows, giving way to a forklift now and then. The entire system works without any aisles, operations only seem to take place on the unloading side. When goods arrive from the production facilities on a swap trailer, a forklift places them on a conveyor system, which automatically transfers them to a stacker crane that puts the pallets on the right runways. From there the pallets roll one after the other to the unloading side, where they are removed by forklifts. This allows considerably greater throughput than before, and enables more timely production.

Now Miavit moves about 500 pallets through the logistics center every day. “Only a few months after starting up the facility, we’re already at 85 percent of capacity,” says Schröer with furrowed brow: an expansion might be needed soon.

Advanced planetary gear head for the most demanding requirements

Masters of the golden triangle

“The Modular System is Constantly Growing and Changing”