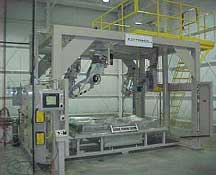 Since implementing offline programming, and then refining the process, Johnson Controls, Inc. has dramatically reduced programming costs wile improving production uptime in its robotic waterjet-cutting cells.  JCI reduced line utilization for programming purposes by 96 percent, from 50 hours to 2 hours, with an 82 percent reduction in cost per new robot program.

JCI is a major supplier of automotive interiors, with more than 200 robots in 19 North American facilities.  These robots require creation of approximately 300 robot programs each year.  About 75 of these reobot programs are then cloned and shared by multiple robot cells.

Offline programming initially reduced the cost per robot program by 25 percent and resulted in a 40-50 percent reduction of off-line program teaching time at JCI, but these programs still required considerable touch-up.  While the computer simulations used to generate the OLP programs created fairly accurate program paths, the lack of calibration often meant the start and end points were not in the correct position, so the program would have to be touched up.

JCI determined that calibration of the robot, fixtures, and tool center point (TCP) would lead to more accurate OLP program development and downloads.  Proper robot calibration is essential for offline programming and path accuracy in high-precision applications.  Like any other mechanical system, robotic cells are built within manufacturong tolerences, resulting in slight differences between robot cells.  These minute differences affect the accuracy during offline programming, robot cloning and recovery of robot programs after maintenance of a robot system.

Significantly less touch-up of these new robot programs was required, and production downtime decreased by 73 percent, from 30 hours to eight hours per program.  The total cost per production robot program also was reduced by 73 percent .  Many companies would be quite satisfied with these results, but JCI continued to improve and refine the process.

JCI also needed to determine how a particular waterjet nest sits relative to the robots.  JCI implemented a single-step alighnment methodology to w=establish a working frame of reference for the robot.  this procedure automates and reduces errors in the robot program cloning process by 50 percent.  Program development time was reduced from 8 hours to 4 hours per program, and calibration and alignment techniques minimized online program teaching time.  As a result, production line downtime decreased by 86 percent, from 30 hours to 4 hours per program.

As a result of these efforts, JCI saves almost $1.6 million a year and avoids the loss of $4,500 hours of robotic production time.  the methods JCI used to achieve these improvements in the waterjet lines easily transfer over to other processes that require accuracy, such as welding, cutting and precision assembly applications.